Every Effort Must be Made to Avoid Direct NATO-Russia Conflict, Says Hungarian Foreign Minister 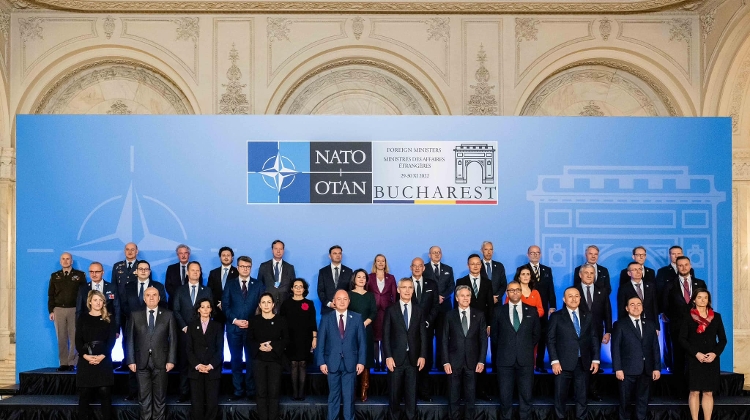 Every effort must be made to avoid a direct armed conflict between NATO and Russia, the Hungarian foreign minister has said, arguing that an escalation of hostilities could affect territories in the immediate neighbourhood.

The focus must be on peace taking also into consideration that winter is coming, the foreign ministry cited Péter Szijjártó as saying at a summit of NATO foreign ministers in Bucharest.

Szijjártó praised Poland for its calm stance in connection with a stray missile hitting its territory earlier this month. “It is thanks to the highly responsible behaviour of the leaders of Poland that we here today are not discussing developments of a third world war,” he said.

The minister warned of the possibility of escalation of the armed conflict between Russia and Ukraine as long as the conflict continues. Hungary, as a neighbour of Ukraine, is fully aware of the possible consequences, Szijjártó said, asserting that this was why the country had a vested interest in peace.

He said it was clear that an escalation of the war would in the first place impact territories in the most immediate neighbourhood and not those countries that are thousands kilometres away.

Szijjártó welcomed the NATO Secretary General’s statement that the North Atlantic alliance is not party to the conflict, and expressed hope that this situation would remain unchanged.

Szijjártó said that “a hitherto unseen terrible and tragic humanitarian catastrophe” could unfold as winter sets in on the continent. “Peace is the only answer to every problem. This is why we have a vested interest in restoring peace in Ukraine as soon as possible,” the minister said.

He noted that Hungary has undertaken a humanitarian campaign of unprecedented scale, taking in over one million war refugees and welcoming children from Ukraine at some 1,300 kindergartens and schools in Hungary.

Szijjártó pressed for avoiding any factors that could lead to an escalation of the war and warned against cutting off channels of communication. He also acknowledged Turkey’s activity as a mediator.

Past Joint NATO Decisions Should Remain In Effect

What is at stake for Hungarians at the Bucharest summit of NATO foreign ministers is that the joint decisions that have been approved in connection with the war in Ukraine remain in effect, Foreign Minister Péter Szijjártó said.

The most important of those decisions is that NATO is not a part of the Russia-Ukraine conflict and that everything must be done to prevent a direct conflict between the alliance and Russia, Szijjártó told public current affairs channel M1 from Bucharest.

Szijjártó said the NATO secretary general had made it clear in his opening address to the summit that NATO is not a part of the conflict.

He added that based on the responses, NATO foreign ministers were in agreement that everything needed to be done to prevent an escalation of the war.