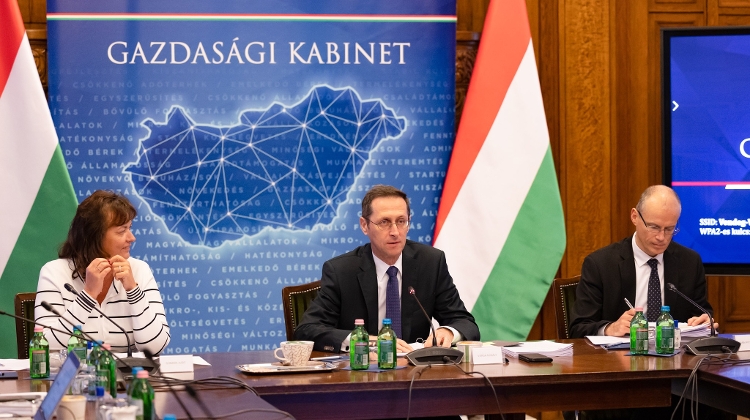 The European Commission believes the reforms undertaken by Budapest so far to ensure EU money is not misused did not go far enough.

The European Commission on Wednesday said it has decided to give its support for the adoption of Hungary's plan for accessing EU recovery funding worth 5.8 billion euros, though the EC will continue to freeze 7.5 billion euros in cohesion funding.

Didier Reynders, the European Commissioner for Justice, told a press conference that the EC would support the adoption of Hungary’s plan if the country fulfils a set of conditions connected with the rule of law.

At the same time, the EC will continue to freeze 7.5 billion euros in cohesion funding, as Hungary has not made enough progress in ensuring transparency in the use of EU funding, he said.

He said Hungary’s plan contained a broad range of reforms and investments which could help to address many economic and social challenges outlined in the EU’s country recommendations.

Planned measures include supporting sustainable growth and social and regional cohesion, he said, adding that the green and digital transitions, education, social policy, the labour market, health care, the fight against corruption, the independence of the judiciary, public procurement, taxation and the pension system were the areas especially affected, and addressing them would contribute to meeting the 27 “milestones” stipulated in the EU’s recovery and resilience conditions.

The interests of the Hungarian people and regulations of the European Union have “achieved a victory over Orbán’s regime”, MEP István Ujhelyi told an online press conference on Wednesday.

Referring to an EU announcement made earlier in the day under which the community would continue to freeze 7.5 billion euros in cohesion funding for Hungary, Ujhelyi said the Hungarian government “now has an official certificate that they have committed crimes, trampling on all rules of democracy, the rule of law, and European values, and they abused EU funds in the past 12 years”.

Concerning the government’s negotiations with the European Commission aimed at accessing the funds, Ujhelyi said the commission had “accepted the (Hungarian) proposals initially, but then they saw that they had been watered up by the government and (ruling Fidesz’s) parliamentary majority”.

“In any other European democracy the prime minister should step down after a decision like that,” Ujhelyi insisted, adding that Orban himself “is an obstacle” in the way of an agreement and Hungary receiving those funds as soon as possible.

Ujhelyi added, however, he was glad that under Wednesday’s decision, Hungary would “not lose the EU funds for good”.

Tibor Navracsics, the minister of regional development, has welcomed the European Commission’s support for the adoption of Hungary’s plan for accessing EU recovery funding as “significant progress”.

The commission’s decision did not come as a surprise to the Hungarian government, Navracsics told a regular government press briefing on Wednesday, adding that the “body had informed the government of its position via the media over a week ago”.

He said today’s decision was in line with what the EC had communicated in September. Navracsics said today was the first time that the commission had officially said that Hungary’s national Recovery and Resilience Facility (RRF) plan was “worthy of approval”.

The minister pointed out that the commission had praised the Hungarian recovery plan as being “one of the best” and had given it the highest marks with the exception of one category. He said the plan’s approval had already been at arm’s length a year and a half ago, and consultations on it had been ongoing ever since.

Navracsics expressed hope that the EC’s decision concerning cohesion monies would open the door to the final round of consultations and a conclusion to the talks after which Hungary and the EU could sign the partnership agreement.

Once this is done, Hungary will have achieved the goal it had set in the summer of reaching agreements with the commission over a period of six months in the two areas they had yet to agree on, giving the country access to EU funds from 2023, he added.

Meanwhile, Navracsics said the commission’s decision to uphold its recommendation to freeze 65% of funding for three operative programmes was not a new development. He said this was due to the fact that the government’s “schedule of passing legislation and setting up institutions” included certain deadlines “that we have yet to reach”.

Navracsics said he was hopeful that Hungary would fulfil the outstanding commitments as precisely as it had fulfilled all the others. He said he hoped Hungary would be able to convince the commission and the European Council next year that the suspension of the funds did not have to be upheld and that the country could gain access to 100% of the funds in every operative programme.

In response to a question, Navracsics said the Hungarian government had always upheld its principles whenever it compromised in the interest of reaching an agreement. He said that if Hungary continued carrying out its programme and meeting more deadlines, it would become clear to both member states and the EC that “we’re not trying to be sneaky”. Throughout the talks, Hungary constantly handled issues that had nothing to do with each other separately, he said.

If Hungary and the EC manage to sign two more agreements before the end of the year, the negotiations could be deemed successful, Navracsics said. In response to another question, he said that he would not resign if the agreements fell through owing to others. Navracsics said parliament would not have to hold any special sessions in this matter.

Gergely Gulyás, the prime minister’s chief of staff, said there was a good chance that Hungary and the EC could sign the partnership agreement needed for the operative programmes.

In response to a question, he said the left may have played a role in the conditionality procedure against Hungary, arguing that the commission had not fully acknowledged the decisions that will be approved by parliament next week.

He said the European Commission was under pressure from the European Parliament, adding that it was a “mistake” to have allowed such a mood to take hold in the EP.

Gulyás said Hungarian MEPs “who are spreading untruths about the country” were also to blame for this. He slammed Hungarian MEPs who had approved resolutions that he said blocked funds for Hungarian teachers, the health-care sector and businesses.

But these MEPs had failed to reach their goal, Gulyás said, arguing that a suspension of funds was not equal to a loss of funds. Hungary next year will gain access to 2,500 billion forints (EUR 6.1bn) in EU funding, 1,500 billion of which has already been unlocked, he said.

A further 1,000 billion forints can be unlocked by the second half of the year, he added. The government has to manage several times as much money to keep household utility bills low, Gulyás said.

Given that the foundations of the economy and the budget are stable, it is high energy prices that can actually cause problems, he added.

Gergely Gulyás, the head of the Prime Minister’s Office, said it was “up to the European Commission if teachers’ pay could be increased by over 20% in January”. He said the pay hike could be introduced if the partnership agreement between the government and the commission could be signed in December.

He said the government could “guarantee” an increase of 10% from the central budget. He slammed the leftist opposition and said “it is easy to commute to Brussels and earn a net 6 million forints a month and fight against a pay rise for teachers”.

Answering a question, Gulyás said the government’s household utility price cap scheme, applied for average consumption, could be continued in 2023. Concerning the cap on the price of other products, Gulyás said they could be maintained as long as there were sufficient supplies.

Answering another question, Gulyás said “agreements mean nothing in the European Parliament” while many representatives “openly exhibit a hatred for Hungarians”. He insisted that those sentiments were “mostly incited by Hungary’s leftist MEPs igniting the majority of one or another group against Hungary”.

He suggested that “it could not be excluded that that is why some commissioners apply more stringent standards for Hungary”.

Navracsics said the Hungarian government was in continuous communication with the commission, which would “prevent a loss of confidence between the negotiating partners arising from a lack of information”.

He also suggested that the commission’s communications had changed: “they now communicate their position to the press first and only then to the Hungarian government”.

Asked if the partnership agreement between the government and the commission could be signed before the end of the year, Navracsics said it was in the commission’s interest “to avoid that any member state should lose funds without good reason”.

“Even though there could be disputes with the commission concerning the implementation, it is not disputed that we are going in the right direction and the work we have done so far gives a basis for us to access the EU funds without losing any of them,” he said.

Referring to press reports, Navracsics said it was “most likely” that the council of finance ministers would pass a decision on the matter on December 12.

Navracsics was asked about cooperation within the Visegrad Group, and he said unity within the grouping was unbroken.