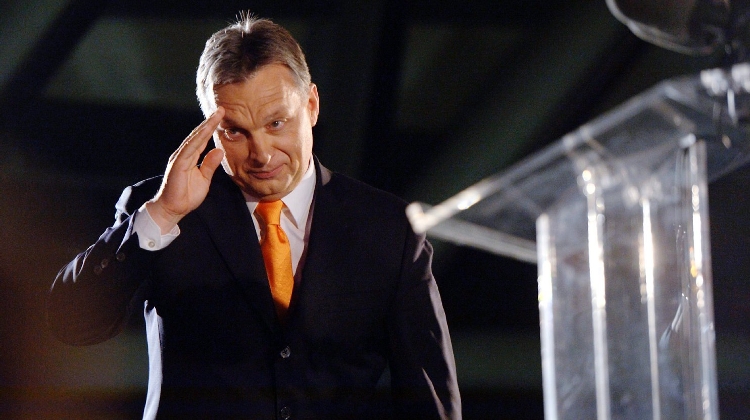 A triumphant Viktor Orbán took to the stage in front of crowds of party supporters just before midnight after Hungary’s electorate returned Fidesz to power for a third consecutive term - making history by doing so.

“We’ve secured a historic victory, and created the possibility to protect Hungary,” Orbán said. He thanked voters for “standing by us over the years” before leading the celebrating crowd in a rendition of the Lajos Kossuth 'Nóta', "Long live Hungarian freedom" - see video below.

“We’ve won,” he declared in his victory speech, that Hungary is not yet where it wants to be, but “has embarked down its chosen path”. “We will go down this path together,” he pledged.

Orbán expressed his gratitude to Hungarians beyond the border who had voted in the election and “helped protect the motherland”.

The Fidesz-led alliance is set to gain a two-thirds majority, based on preliminary results with 88.57 percent of the votes counted, and is on course to win 133 seats in the 199-seat parliament.

Right-wing Jobbik came in second strongest, however leader Gábor Vona has resigned as promised since he didn't win election. Vona said the party board would make plans concerning tasks ahead on Monday afternoon.

Vona acknowledged the election victory of the Fidesz-Christian Democrats, adding that Jobbik had planned to replace the government but had not succeeded. He thanked everyone who cast their votes and said the high turnout was a celebration of democracy.

Green opposition party LMP‘s Akos Hadhazy has tendered his resignation as the party’s co-leader. He told MTI that he would not return his mandate for the time being.

Chairman Gyula Molnar announced that the Socialist Party’s (MSZP) board all resigns.

The small opposition Egyutt party “acknowledges the outcome” of the election and the party board will resign, Egyutt leader Peter Juhasz said. He told a press conference that Egyutt was “disappointed” about the opposition’s performance.

Momentum could not secure five percent of the votes cast on national lists, and so failed to make it into parliament.

The satirical Two Tailed Dog Party is being blamed for the loss of opposition seats.