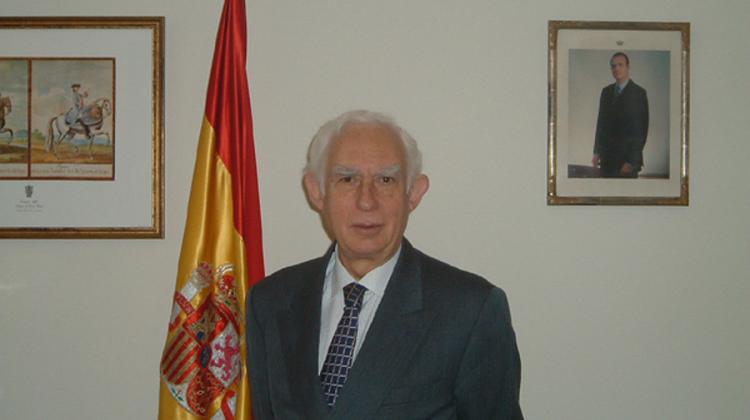 Mr. Antonio Ortiz García, Spanish Ambassador to Hungary, is the first ambassador interviewed on Xpatloop and we are honoured by the opportunity.
Mr. Ortiz graduated from the Faculty of Law of the Complutense University of Madrid where he subsequently taught International Law for ten years He was awarded numerous research grants at the Academy of International Law at The Hague and also worked and carried out research at the City of London College and in legal services of the European Community in Luxembourg.

Mr. Ortiz joined the Spanish Foreign Service in 1964 and served in a number of positions at the Ministry of Foreign Affaires in Madrid as well as abroad. Ambassador Ortiz began his Foreign Service career in the Dominican Republic, and was Secretary of the Spanish Representation in Bucharest, Consul in Metz, Deputy Permanent Representative to UNESCO in Paris. He was appointed Spanish Ambassador in Ghana and in Togo in 1976 and Consul General in Berlin in 1984.

He was Head of the Spanish Diplomatic Mission to Namibia during the independence process of that country in the late eighties. He also served as Spanish Ambassador to Romania from 1992 to 1996 and as Permanent Representative of Spain to the International Organizations in Vienna from 1996 to 2000. On 19 September 2004 Mr. Ortiz was appointed Spanish Ambassador to the Republic of Hungary.

Ambassador Ortiz is a frequent contributor of studies and articles on legal, economic, political and international issues and a speaker at Universities and other institutions. He has received an honorary doctorate from the University of Craiova (Romania).

He speaks English, French, German, Romanian and Italian. He and his wife, María Dolores López-Cámara, have two daughters and two sons.

1.What surprised you most about Hungary?
The incredible progress that has taken place since the first time I came to visit Hungary in 1968.

2.Friends are in Budapest for a weekend - what must they absolutely see and do?
Going up to the Citadella, taking a look at the view of the city from behind the Nemzeti Táncszínház where there are fewer tourists.

3.What is your favourite Hungarian food?
Halászlé, káposzta, fogas.

4What is never missing from your refrigerator?
Bottles of cava (Spanish sparkling wine) and Tokaji Aszú

5.What is your favourite Hungarian word?
“útépítés” (road construction), this was the word I saw most frequently on the streets of Budapest when I first arrived…

6.What do you miss the most from home?
Nothing really, I visit my home-town Madrid quite often.

7.What career other than yours would you love to pursue?
Perhaps playing tennis or golf professionally.

8.What’s a job you would definitely never want?
Luckily I never had to worry about doing work I didn’t like…

9.Where did you spend your last vacation?
I‘ve spent three days in Luxembourg; one of my sons lives there.

10.Where do you hope to spend your next vacation?
In Spain: either the Canary Islands or some other sunny place.

11.What was your favourite band, film, or hobby as a teen?
I loved and still love to travel and see the world. One of my favourite movies is “Sunshine” directed by István Szabó.

12.What can’t you resist?
All the pleasant things in life…

13.Red wine or white?
Depends where, in Spain I prefer a good Rioja or Ribera de Duero, in Hungary I like white wines from the Balaton region and Villány.