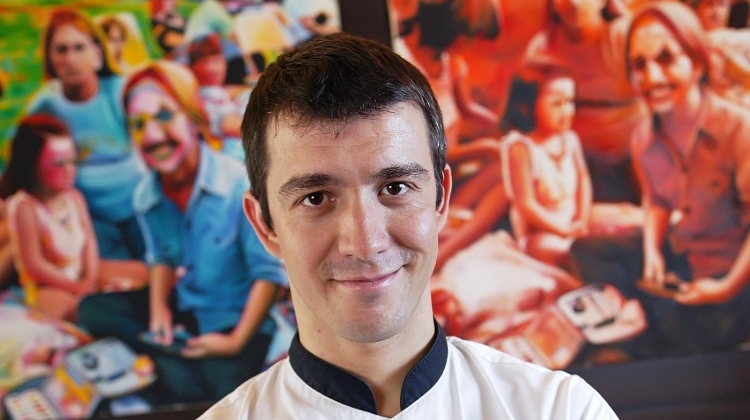 Miguel left his home country – Portugal - at the age of 20 to go to England and study Hotel, Restaurant and Tourism Management at the City of London College. During the second year of the same course Miguel was lucky enough to find what he believes is his vocation in one cooking class.

“Since that very first cooking class I realized I was in the wrong place. It’s difficult to put your feelings into words but I suddenly realized that that degree wasn’t made for me and what I really wanted was to be a Chef.
In the very same day, when I arrived home I started to look at the cooking schools around and a couple of weeks later I was enrolled at one of the most prestigious cooking schools in the world, the Cordon Bleu”

The rest is history as they say.

After graduating from the Cordon Bleu Miguel did his apprenticeship in London and then went to France and later Spain learning with the best in the profession.

In 2008 Miguel was invited to come to Budapest and open the Costes Restaurant.

Costes quickly become a reference not only in Hungary but in an international level too. In less than 2 years Costes was awarded the very first Michelin star in Hungary – award that has been kept since then – and, many other important recognitions. The last was in the middle of February where Costes won for the second time the Restaurant of the Year in Hungary.

“We don’t cook for the awards or recognitions, we do it for our guests but, and saying that, if on top of it we have our work recognized by the important guides in the industry is the icing on top of the cake”

1. When did you arrive in Hungary and what brought you here?
I arrived in April 2008 to open the Costes Restaurant

2. Have you ever been an expatriate elsewhere?
I left home in 99 and I lived in England, France and Spain

3. What surprised you most about Hungary?
There are many “funny” things here but the stickers in the bread is something I still don’t understand

4. Friends are in Budapest for a weekend - what must they absolutely see and do?
Apart from the obvious dinner at Costes I would recommend them do start the day at the Great Market Hall, then a walk alongside the Danube trough the Chain Bridge and until the Castle. Then probably some shopping in Andrassy Utca and to finish the day in a relaxing way the typical baths

6. What is never missing from your refrigerator?
Iberico ham

7. What is your favourite Hungarian word?
Nagyon Jó.

8. What do you miss the most from home?
Apart from family and friends the smell of the sea

9. What career other than yours would you love to pursue?
Honestly I cannot see myself doing something else than cooking but I remember that at some stage during my teenage years I wanted to be a sound engineer so it would have to be something related to music

10. What's a job you would definitely never want?
Hate monotony and wouldn’t be capable of having a job where I couldn’t express myself

11. Where did you spend your last vacation?
In Bali

12. Where do you hope to spend your next one?
Back home

13. What was your favourite band, film, or hobby as a teen?
Band pearl jam, film pulp fiction and bodyboarding as a hobby

14. Apart of temptation what can't you resist?
A cup of freshly ground coffee

16. Book or movie?
Depends but if I have to choose one then I’ll go with movies

17. Morning person or night person?
Now that I’m getting older I think I have more energy and am more creative during the day

18. Which social issue do you feel most strongly about?
The number of hungry children in the world

19. Buda side or Pest side?
Pest without any doubt

20. What would you say is your personal motto?
"It is not how much you do, but how much love you put in the doing."