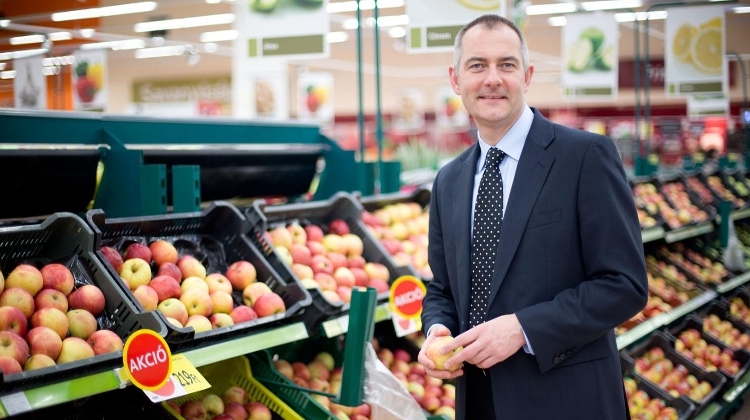 Nigel Jones was appointed as Chief Executive Officer of Tesco Hungary in January 2013.

Nigel joined Tesco in 1991 and held various Store Manager roles before moving to Poland for 4 years, firstly as part of the in country team, and then to support the acquisition of the German owned HIT discount stores.

In 2002 Nigel relocated to Budapest to complete an 8 month assignment as the Retail Director, covering stores operating in Budapest and the East of Hungary.

Nigel returned to the UK in 2003 to join the store operations team developing the Hypermarket Format "Tesco Extra".

In February 2007 he moved into the Tesco supply chain as UK Fresh Food Distribution Director before being appointed Overall Logistics Director for the UK and the Republic of Ireland in 2009.

Nigel then became the UK Commercial Director for General Merchandise and Clothing and joined the UK Executive board, before beginning a six month CEO development program including studying at INSEAD Business School.

Nigel has 4 children, Rebecca, Rachel, Samuel and Grace, and he be moved to Hungary with his partner Tracey.

1. When did you arrive in Hungary and what brought you here?
For the very first time way back in 2001, I came here for two weeks and stayed for nine month, working at our Megastore in Budaörs.

At that time here in Hungary we opened not one but two of the biggest Hypermarkets within the whole Tesco worldwide network. I supported those launches and was responsible for opening more stores in the East of the country, including Debrecen, also here in Budapest I launched the Fogarasi store amongst others.

It was a great time, my career with Tesco then continued elsewhere until eventually I was invited to come back to Hungary as CEO in January 2013. I was delighted to return and over the past months I’ve met lots of from my previous stay here, they’ve moved up within the organisation and its rewarding to see all the progress made.

2. Have you ever been an expatriate elsewhere?
My first experience of expat life was in 1999, in total I spent four years in Poland before coming to Hungary, than had time back to U.K, then went back again to Poland again.

3. What surprised you most about Hungary?
When I came back it surprised me how actually similar everything was, especially in the countryside. Infrastructure has improved somewhat and yet the countryside remains relatively unspoilt and it’s fantastic to travel around the country.

This time I’ve had chance to discover the centre of Budapest, which I couldn’t do before due to intensive work commitments, and now I enjoy exploring Hungary’s rich history, for example up in the castle district you can almost feel the heritage.

4. Friends are in Budapest for a weekend - what must they absolutely see and do?
The list of things to do and see is so long that a weekend is often not enough. Almost every weekend we have friends over to visit. I usually suggest a walk on Margaret Island, then along Andrássy avenue, plus a trip on the funicular up to the Buda Castle.

Seeing the Chain Bridge at night is magnificent, and Parliament viewed in bright sunshine has to be one of the best buildings in the world. My kids like the zoo and we recommend that to families that come over, Hero’s square is a great place to see and feel Hungary’s history.

These days there are so many great restaurants to suit all tastes, I like Borkonyha and Bock Bistro, but as I said the list is nearly endless. On Sundays having brunch one the 5* hotels is a nice treat, Marriott is good when we’re with kids, and the Four Seasons is a great when I just go with my wife.

5. What’s your favourite Hungarian food?
I really like Gulyás! Recently at a Tesco Family Day we had a cooking event and I got the taste, and judge, 49 different bowls of Gulyás. I love spicy food, and the fact paprika can be found in most things here is great. As winter is coming I’m looking forward to some of the heavier Hungarian dishes, along with a good glass of local wine!

6. What’s never missing from your refrigerator?
Milk, since I love coffee with a splash of milk. Also a bottle of something sparkling – a few bubbles always seem to brighten up the day!

7. What’s your favourite Hungarian word?
Bizalom. Trust is central to every good relationship, and it’s a key factor at work.

8. What do you miss most from home?
I’m a big rugby, and cricket, fan – and I can’t go to see all my favourite team play these days, but I have satellite TV and so I miss very little really. Because of technology it’s easy to keep in contact with family and friends, often I go home at the end of the day and see a family member in the UK on our big screen chatting with the children.

It’s important for them to have face-time together, and Skype helps with that. There’s so much here, what’s to miss?!

9. What career other than yours would you love to pursue?
While growing up I always wanted to be a doctor, I almost was but that’s a long story, anyway am still very interested in that profession and medical developments.

10. What's a job you would definitely never want?
I really don’t know.

11. Where did you spend your last vacation?
In Spain, we hired a villa with friends, there were fourteen of us, I love spending time with a good crowd of people that get along well.

12. Where do you hope to spend your next holiday?
We’re going to the U.S. in autumn.

14. What was your favourite band, film, or hobby as a teen?
Band: The Jam. Film: The Breakfast Club. Hobby: cricket – I played it and had the chance to turn professional when I was 17, however I chose to continue my studies based on good advice from my father.

He said something along the lines of if I was good enough to play for England then I should go for it, if not then County Cricket might prove to be a tough life.

15. Red or white wine?
Red –I’m continuing to work my way through the list of Hungarian wine makers, practically from A-Z, to learn about them, and haven’t found anything really bad but a lot that’s really good. Via work I’ve been to many tastings and visited many places with a sommelier, who takes wine appreciation to another level, and so I’m constantly learning and discovering grape varieties and new winemakers to enjoy.

17. Morning or night person?
A morning person, I’m up with the sun, and sometime before it!

18. Which social issue do you feel most strongly about?
I do worry about the lost generation of youth today. It’s topical for me as two of my four children are approaching the age when they need to think about work. It’s a world-wide issue that’s present in Hungary too, here we have a company initiative to help young people gain experience and helps them into the work place.

20. What would you say is your personal motto?
My father told me, ‘No one is better than you, and you’re not better than anyone else.’ I’ll tell all my children the same thing.