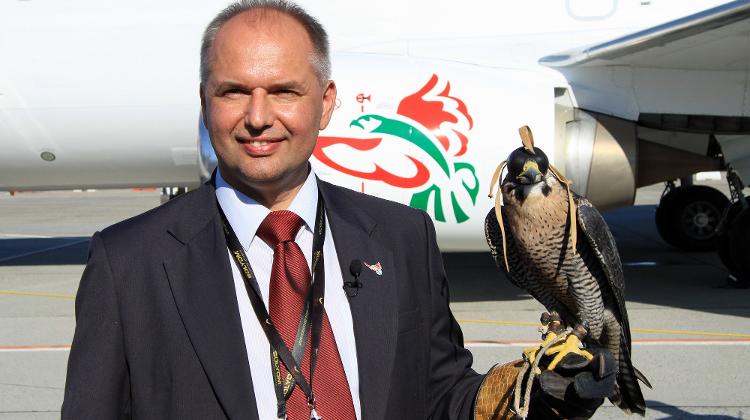 József Vágó (45) CEO of SÓLYOM Hungarian Airways Ltd. was born in Budapest, Hungary. He started his aviation career in 1987 at the Russian Military Aviation Academy as a trainee fighter pilot. After finishing the Academy with excellent results, he became a pilot (lieutenant) in the Hungarian Air Force.

In 1997, he moved into civil aviation and got his commercial pilot’s licence, to be followed later in 2008 by his 'flight operation officers’ license. During 1999 - 2011, he worked as a Government advisor. Between 2007 and 2010 he became the Head of the Hungarian Civil Aviation Authority and Director General for the Military Aviation Authority. He represented Hungary at the EU Commission Air Safety Committee, the European Aviation Safety Agency, Eurocontrol and NATO. he also became project leader for NATO C-17 certification project for NAMA.

Following the Malév bankruptcy he has been qworking on a business model for a new Hungarian National Airline, now named as SÓLYOM Hungarian Airways.

1. Where did you grow up?
At Érd, in a big house with my family. We used to grow vegetables and instead of Erős Pista, we named them Erős Jóska as my father's name is József.

2. If you could be an expat anywhere in the world, where would you choose?
Hungary for sure, but I am very hesitant exactly where else because I like Villainy, Balaton and Őrség, too. I also love Eger - I call it my home-city since I also have some family members living there. I also like Hortobágy and living by the Tisza Lake. One side of my family is from Héviz, the other from Érd. I have always been a big traveller, and have been to lots of places where I could easily feel at home like Asia, Canton, Pattaya. Places where everything is green. I also loved London my favourite spot being Leister square as I spent a few months there. I also loved Spain, France, Italy, Helsinki and Stockholm. But, wherever I went, I always had the feeling that I had to come home to Hungary.

3. What would you miss most if you moved away from Hungary?
Firstly, my family as I have a very big one. My mother has a sister and a brother and my father has four brothers. I think I am very fortunate to have such a family. We always celebrate together. My father is a committed fisherman and he is very adept and successful at hooking carp at a special place at Lake Velence. My twelve year old son often goes with him and it is good to watch them to see how they understand each other, almost as though there was no generation gap between them.

4. Friends are in Budapest for a weekend - what must they absolutely see and do?
This is a difficult question. If they are young they should go to the Szíget Festival and they would probably never want to leave there! Motor sport fans should come here for Formula 1. Those on honeymoon, or those in later life should visit the many spas we have here . Hospitality in Hungary is good, and still relatively cheap. That is why Hévíz is so popular with Russians and Germans.

Everybody can find something to enjoy in this country. The airline’s strategy will be to focus on open but not well used travel / tourism possibilities here, hunting for example since the wild-boar population is too high.

Lake Balaton was full of water when I went there in summer. Same too with Hortobágy and Hévíz. An interesting fact to mention is that I think there are more than 30 different types of mineral water in Hungary.

The mentality of Hungarian people is changing; there are lots more customers in the restaurants for example so they do not have to cut as many cormers. There is something about the Carpathian basin which attracts people. Tourism has a positive side effect – there are people who explore here and their feed-back brings to Hungary more and more people. The quality of food, vegetables is of a world premium quality here also.

5. What is your favourite food?
I love my stomach very much – I'm happy eating everything from A to Z – from fish-soup, goulash, to fruit-soup.... I like very spicy things, like Thai food. This is why my Mum grows paprika in the garden. I brought the seeds over from Thailand.

6. What is your favourite sport / form of exercise?
I love football – not just commenting on it but actually playing it. In general, I like walking in the forests and swimming. Also I am running more these days because I do not have time to do much else.

7. What is your favourite place in Hungary?
Eger, if I had to name just one.

8. What career other than yours would you love to pursue?
I have a driving force in me which means that I always have to be doing something – a legacy from my childhood. I also feel that I have to be creating something. This is why I do painting, tiling – I love physical work, but these days I have to use my brain more (bringing investors to Hungary who will invest in aviation). I know what my plans are and I know that they are working. I have high social sensitivity – giving a few thousand people jobs / giving them salary and ensuring safety for their families.

We would like to be seen as the number one family friendly employer. If they (couples) work together, they will understand each other better. If one of my female employees becomes pregnant, they will have a job waiting for them when they come back..

We will also have a kindergarten which will open very early and stay open till late. We’ll organise social programs, to be able to do things together. We would like to show that people can be proud of working with us.

9. What’s a job you would definitely never want to do?
This is the most difficult question. I think that someone who likes what they do, whatever it is, will do it well.

10. Where did you spend your last vacation?
In Italy - at Garda Lake - with the family.

11. Where do you hope to spend your next one?
Somewhere in the mountains with a lake nearby to have calm and silence all around me. During the day I like to visit spas. I’ve given up on busy places.

12. What was your favourite band, film, or hobby as a teen?
Film: Life of Brian (saw Shark 1 when I was 8 years old with my sister who was then 6).
Music: Queen
Hobby: Flying, DYI, animals of any kind.

13. What is a temptation that can't you resist?
I can’t resist animals, children and a smile.

14. Red wine or white?
When younger, I drank sweet wines. Now I like dry – don’t care about the colour but it has to be Hungarian.

16. Morning person or night person?
Night. Could kill in the mornings :-)

17. Which social issue do you feel most strongly about?
The poverty of children in Hungary and also those around the World. First we have to clear out our own nest, then we can start to help others. Too many children are missing even the basics. I do not really know how, but I will figure out the way to help. (I like “leading by example” to be sure I can encourage the participation of those from whom I want to help get help and support.

19. Which achievement in your life are you most pleased about?
My family and children.