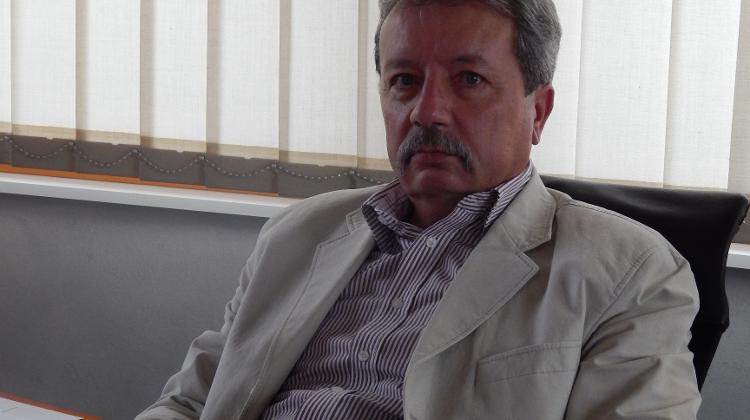 It is very important to me, like to all other employees at Hertz, to make the company successful.

Back in 1918, the Chicago taxis were dirty, their drivers impolite and out to cheat their passengers. It was John D. Hertz – our name-giving founder – who had turned to the Chicago mayor and asked him for a taxicab service concession. Cars were painted yellow - hence the yellow cab company name, – drivers were given uniforms and cabs were equipped with taxi meter. This is how the yellow-and-black colors have become the symbol of high quality, reliable and clean transportation services.

Hertz appeared in Hungary first as a branch of Főtaxi Cab Company, in 1978. The company’s attempted privatization faltered in 1990; it was in 1995 that Thomas Alpern, a German businessman (with a German passport and a Hungarian heart) and myself founded the Hertz Car Rental Company. We have been working together ever since.

The quarry-stone wainscoting of the Budapest Hertz Headquarters building stands for stability; the circular glass surfaces symbolize foresight of both drivers and leadership; the suggested transparency is what determined our way of thinking and general attitudes during the past four or five, you may add critical, periods.

Once the building stood, we named the street leading up to it HERTZ Street.

1. Where did you grow up?
I was born and raised in Budapest. For a long time, I served in Mongolia and when I returned in 1989, I joined Főtaxi’s car rental branch. I started in their technical department and soon became its leader. By my learnt profession I am an economist, and the saying among ourselves in the company is that we do not now much about anything, but, as our competition puts it, “we are not bad in the car rental business”. I do not exaggerate if I say my heart’s been yellow-and-black for 30 years now.

2 . If you decided to leave Hungary, which country would be your first choice?
Since I was born and raised in Hungary, it is this country’s culture, history and national traditions that I know best and feel at home and comfortable with. I love to visit London and enjoy its colorful, multinational atmosphere. When traveling in the United States (New York, Oklahoma, Salt Lake City or San Francisco and others), I love the feeling of endless freedom. Yet, I always return to Hungary, even though she is plagued by many problems and suffers from the legacy of a particularly stormy national past, full of upheavals.

Everybody here felt the relief the 1990 regime change has brought about. Since the car rental industry belongs to the realm of tourism, it is perhaps wise to point out that this country has been a friendly, inviting and hospitable place for a long time, not necessarily only since the collapse of Communism. It is great pleasure for me to experience the booming tourism in Budapest; when we come out of a theater at night, it is hard to hear Hungarian in the streets, the city is bursting with foreign visitors who obviously have a great time here.

3. What would you miss most, if you left?
I go for a walk to the nearby forest with my dog every morning. I guess, this is what I’d miss most.

4. When friends come to visit you for a weekend here in Budapest – what, do you think, they should see or try by all means?
Well, the sights of Budapest deserve a thorough look, by all means. If somebody has a knack for 20th century history, I definitely would take him or her to the Museum of Terror and the Statue Park. If there is time to explore the countryside, the proud cities of Pannonhalma, Visegrad or Esztergom come to mind. I’d show them our Stalactite Cave at Aggtelek, a unique place and also a UNESCO World Heritage site; also Lake Balaton with the Tihany Abbey and Peninsula and the surrounding wine-growing areas are very attractive. To learn about Hungarian traditions and honest country cooking, Lajosmizse and the Tanya Csarda Inn, serving probably the country’s most authentic Goulash, are worth a visit.

5. What is your favorite sport? Which one are you active in, if time permits?
You know, a long, long time ago I was canoeing, one of the few internationally successful Hungarian sports. And though I never made it into the highest echelons of this wonderful water sport, I certainly learnt how to fight and make sacrifices in order to succeed. Once also football was a great national sport here, but it has declined beyond repair during the past 10 years, so if I want to enjoy an exciting match – I have to fly to Manchester, Liverpool, London or Milan.

6. Is there something that would never be missing from your kitchen?
Both my wife and I have been on a special Paleolithic diet for five years now, consisting of only meat, vegetables and fruits. According to some theories, those are the only inputs easily digested by the body. So no dairy products, no sweets and no cereals.

7. What is your favorite place in Hungary?
Vecsés. As a special favor of providence, I was given the chance to be instrumental in the establishment of my own workplace here and my home is also here, in Vecsés.

8. If you were given the chance to choose a different career – what would it be?
Well, I have been gardening for some 30 years…

9. Is there a job you’d be reluctant to take or even squarely declined?
I would never want to be a professional soldier (I did my mandatory service as a border guard) because I know what restrictions wearing a uniform is associated with. I respect this profession, but it needs a different personality from mine.

10. Where did you spend your last vacation?
In Toscana.

11. And where would you like to go next?
Soon we’ll go on an Eastern Mediterranean cruise, starting in Venice.

12. What was your favorite band, film and hobby when you were a teenager?
Band: The Beatles
Film: Hair
Hobby: Reading. It has been ever since.

13. What is it you cannot resist (except temptation)?
It is hard to answer this, because basically I am a disciplined person. I probably could not resist going on a journey to exotic places somebody has recommended as wonderful and I have never been to. Like the Southern Seas or some similar wonder.

14. Which do you prefer? Red or white wine?
I guess, rather red. The wines from Villany are out of this world.

15. You’d rather read a good book or went to the cinema?
I already said: reading. I do read every day.

16. Are you a morning person or a night owl?
I am more active early in the morning…

17. Social problems that excite your interest and involvement most?
The poverty that took hold lately in Hungary and the problems sprouting from it are truly making me concerned. Another sore point and long unresolved problem is the situation of the Roma population in this country. A hypocritical and deceptive debate has been going on for decades, as to whether calling these people Roma or Gypsy was right. Nobody seems to care about their real problems, mind you. Nothing has happened.

18. Do you like Pest or Buda more?
I say Pest, because I grew up as a kid around Egyetem tér, within the 500 year old city walls.

19. What life achievement are you the proudest of?
I am really proud of my work in various civil and professional organizations.
I had been president of the Hungarian Association of Car Rental Companies for 10 years. I had also been vice president, later president of the Tourism Coordination Committee for 8 years. I was member of the National Tourism Committee and I was also on the advisory board to the Member of GOvernment Overseeing Tourism.

20 What is your motto?
As someone working in the services industry, my way of thinking is shaped by simple truths, like these: Just because you crave a jug of milk, you don’t need to buy a cow; and the shortest route from one person to the other is through a smile.