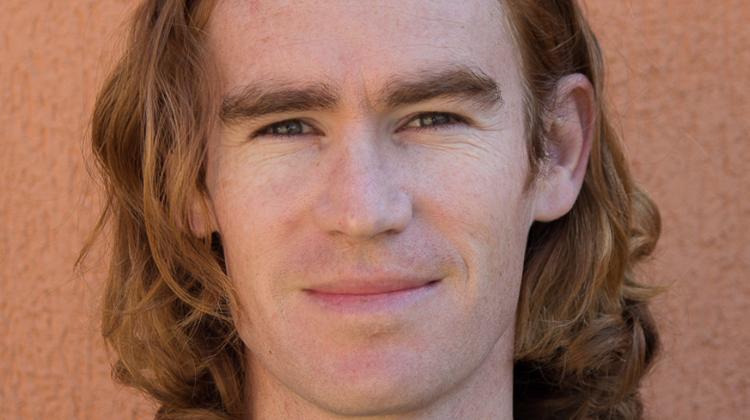 Colm FitzGerald was born in Ireland and moved to Southern California at the age of three. He grew up in the harbor city of San Pedro and then in the agricultural town of Fillmore.

After high school and a short stint at college studying anthropology, he moved back to Ireland in 2004. Hoping to re-connect with his roots, he found himself alternatively connecting with the thousands of immigrants that had flooded into the country.

In the town of Celbridge he met a group of Hungarians. Soon he and Anita, one of the Hungarians, began dating. In March of 2005, Colm visited Hungary for the first time and in 2007 he and Anita were married in California. After seven years in the U.S. and many trips to Hungary, they now live in Miskolc.

Colm is currently pursuing a career as a travel writer and photographer. Read about his expat adventures on his website paprikaproject.com

1. When did you arrive in Hungary and what brought you here?
I arrived in Hungary this past January. My wife, Anita, is Hungarian so I had been here many times before, but this is my first living here. We owned and operated a window cleaning business in California (where I grew up) for the past seven years. Last year we decided to slow things down a bit, so we sold our business and moved here!

We’re currently living in Miskolc with my father-in-law while we look for property near Eger. Our ultimate goal is to have our own little homestead with a vegetable garden, fruit trees and of course a wine cellar. The Hungarian Dream! More than anything, however, I moved here because I was simply ready for a new adventure. And Hungary is full of fascinating off-the-beaten-path experiences.

2. Have you ever been an expatriate elsewhere?
Anita and I lived in Madrid, Spain for a year in 2006. It’s a crazy city and there were times I thought I’d lose my mind. I would do it all over again in heartbeat though. We were never, ever bored.

3. What surprised you most about Hungary?
The richness of Hungarian culture. The food, the language, customs and traditions—people keep these things alive and well despite the pressures of globalization. I’m embarassed to say this now, but I knew zilch about Hungary before visiting in 2005.

4. Friends are in Budapest for a weekend - what must they absolutely see and do?
There’s so much to see and do in Budapest! Walking around Buda Castle and the Fisherman’s Bastion is of course number one—the views are simply magnificent. A walk up Andrássy Avenue ending at the impressive Heroes Square is also a must do. The Városliget (City Park) is a great place to explore. For a peek into Hungary’s darker history, the House of Terror really puts things into perspective; very sad, but not to be missed.
There are actually many things I’ve yet to do and see myself: I’d like to check out the craft beer scene at Élesztő, visit the Széchenyi and Gellert baths, have coffee and cake at Gerbaud, eat at Rosenstein’s and visit Memento Park.

5. What is your favourite Hungarian food?
That’s a really hard question! I’m gonna go with halászlé (fish soup), with csülök pékné módra (smoked and baked pork hocks) coming in at a close second.

6. What is never missing from your refrigerator?
Pickles. Pickled spicy peppers to be specific

7. What is your favourite Hungarian word?
Ébresztő

8. What do you miss the most from home?
Sierra Nevada Pale Ale, authentic Mexican food and sunsets at the beach.

9. What career other than yours would you love to pursue?
I would love to be a National Geographic photographer.

10. What's a job you would definitely never want?
Hotel manager. Way too much to deal with.

11. Where did you spend your last vacation?
Croatia. Absolutely beautiful country.

12. Where do you hope to spend your next one?
We’re hoping to do a road trip around Hungary in May or June. There’s so much I haven’t seen yet.

13. What was your favourite band, film, or hobby as a teen?
I was and still am a huge Pearl Jam fan.

14. Apart of temptation what can't you resist?
A good cup of strong coffee

15. Red wine or white?
Definitely red. Although with all the superb white wine in Hungary I’m begining to see the “light”.

17. Morning person or night person?
Night for sure. However, my wife is an early bird and it’s starting to rub off on me. Got up at 5:30 am today!

18. Which social issue do you feel most strongly about?
The unlawful exploitation of nations and their environments by multinational corporations and imperial foreign policies.

19. Buda side or Pest side?
Pest, but I’m not really a big city person. I’d prefer to live in the countryside with chickens and a vineyard.

20. What would you say is your personal motto?
With persistence and irrational optimism anything is possible.