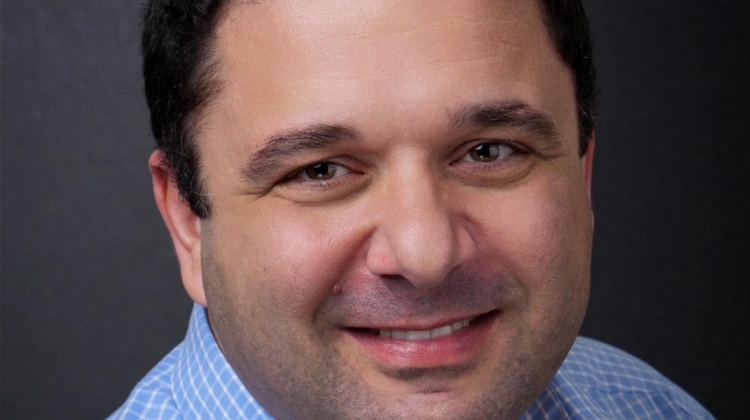 What brought you to Hungary?
Originally I was born here in Hungary, my father is Greek but my mother is Hungarian. When I became 6 years old we moved to Greece and I only came back to Hungary for the university education.

I am living in Budapest since then together with my wife Noémi, and my two beloved kids a boy named Aris, and a girl named Artemis.

What are you known for? How would you describe yourself?
I am a person who connects technology with business. Having experience from the field and ample knowledge of standard IT management, and control frameworks my special focus is on personalized human motivation, team building, and performance management.

My primary mission is to transform people to future e-Leaders, who understand technology evolution, and adapt it to everyday business environment.

I enjoy leading people by driving cultural changes, and finding new ways of motivating them. I like teaching students, and seeing their transformation. I want students to learn something from me, and not just to learn about something.

But most of all I love delivering speeches for wide audiences, and influencing people’s thoughts by burning pictures in their minds via metaphors and visual stories. My ultimate goal is always to make them remember at least one thing of what I told them.

It is always good to step out from one thing, and step into something different, I could even say that those are the moments when I can solve problems raised in my other assignment.

The main source of energy is coming from the people I meet: working both in the business world, and in the academic environment gives me the opportunity to meet with great people not only from the local market, but people from all over the world.

What made you choose the field of technology?
I always say that my life was driven by directed incidences. The very first one came quite soon. When I was still in kindergarten, I was living in the same room with my grandmother.

Every night we were practicing basic mathematical calculations, maths are the basis of technology related jobs… On the 20th of August 1981 we relocated to Greece and I started the first class there on 1st of September.

Without knowing the language I had challenges with most of the topics but I could understand mathematics and since I already knew the multiplication table I could easily get advantage compared to my classmates.

After few months my father asked the teacher about my personal development, and the answer was very funny “the kid might be very clever, but we do not understand what he says”.

Obviously because mathematics is international I could understand every task but I was still answering in Hungarian, it took me few more months to adapt to the new environment and the Greek language.

The second directed incident came few years later when my father took all of our spare money, and went to Germany to buy a car. Instead of a car, he bought me the first Commodore 64, probably I was the first person in the small city where we lived having a C-64. My father could predict the technology evolution, and invested all of his spare money into a box which we could not even use for a few months, as the user manual was in German.

Few years later when I realized what happened back then, I asked my mother how could this happen, and why she didn’t throw the C-64 to my father’s head, but by now I realized that my mother was also a tech-geek. Today she is the one who calls me up about the latest technologies…

Going back to my teenager days when the time came to choose my career path, I said to my father that I would like to become a cook. Obviously he was shocked as he had already invested a lot buying the C-64 some years ago, so he tried to direct me by telling me that only the top 10-20 cooks in the country are successful but if I become a software developer, even if I am among the last ones I could still earn a good salary.

His words could not change my mind as I strongly believed that I could easily get among the best cooks in the country.

After few months of thinking he came back to me with the following idea: “If you are a cook, it would be impossible to have programming as a hobby, but as a programmer you could always cook in your spare time”. This was the third directed incident in my life, which defined the base of my career…

You said you would like to be a cook, are you still cooking in your spare time? What is your favorite Hungarian food?
My wife is a great cook so there is no pressure from my side to get in the kitchen to eat something special. I cook only when I want to cook so this really became my hobby.

Cooking is one of the things that turns my mind off, and it is the best relaxation. I like many different cuisines like Greek, Italian and Chinese. If I have to choose one Hungarian food, I would say kale casserole (rakott kelkáposzta), but what I like even more is the seafood, even though this is something you cannot easily get in Hungary.

What do you miss most from Greece apart from the sea and the seafood?
The friendliness and hospitality of Greek people. I always go home for vacation every summer to reboot myself, and to fill up my batteries.

When I am in Greece it always reminds me that happiness can sometimes be caused by very simple things: a good laugh with old friends at a Greek ouzeri, eating fresh seafood is irreplaceable…

You said home… What is your true home then, Greece or Hungary?
I consider myself European. I can be home anywhere in Europe if my family is with me, and I can have access to my friends. Thanks to technology, you can be anywhere, and still get connected to your family and friends, so home can be everywhere.