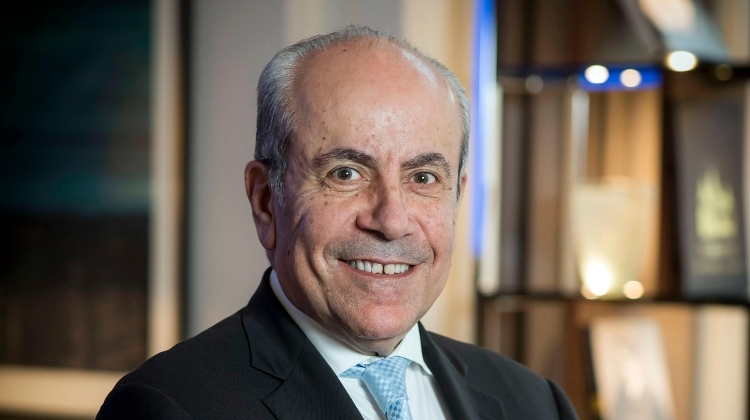 Mr. Rahim Abu Omar is a well-known Jordanian professional, highly qualified hotelier, recognized for having exceptional leadership skills and business acumen. Before joining The Ritz-Carlton, Budapest he worked for market leading hotels such as the Metropolitan Hotel Dubai and the Metropolitan Beach Resort & Club as General Manager, and at Habtoor Hotels as CEO.

He participated in the comprehensive rebranding of four and five-star properties under Habtoor Hotels and Metropolitan Hotels. Mr. Rahim Abu Omar is a member of the first Hotel Committee of Dubai Department of Tourism and Commerce Marketing. He was awarded with the Hotelier of the Year award in Jordan in 2009 and he is also recognized as one of the top 50 influential hoteliers in the Middle East 2009, selected by Hotelier ME magazine.

“I’m very proud to join the Ladies and Gentlemen of The Ritz-Carlton, Budapest, and I am looking forward to contributing to the success of the hotel in this beautiful Central European capital. I am going to work with pleasure with the talented team to take the hotel to the next level, by delivering unforgettable Ritz-Carlton experiences.” Mr. Rahim Abu Omar said.

With his extensive knowledge and experience in the hospitality industry, Mr. Rahim Abu Omar will contribute to the further successes of The Ritz-Carlton, Budapest, which celebrated its second year in the Hungarian market. The hotel will continue to provide memorable Ritz-Carlton experiences and uphold the traditions that hallmarks The Ritz-Carlton brand, while striving to further enhance service quality and brand value in the future.


1. When did you arrive in Hungary and what brought you here?
On 17 October 2017. The owner of the hotel approached me from Dubai since I worked for him between 1982 – 2011, and for various reasons I was keen to work for him again, this time in Hungary.

2. Have you ever been an expatriate elsewhere?
If you consider being an expat as working abroad somewhere where you need a work permit, then I have been one in Dubai, Bahrain and Lebanon. Philosophically speaking, I consider every place where I work as home. For example I went away from Budapest for a few days after being here for 6 weeks, and when returned I already felt and said: I’m back home.

3. What surprised you most about Hungary?
My first interaction with Hungary was in the 80’s when the Malév airline crew staying at a hotel I worked for in Dubai at that time. We organized related events together then, and I enjoyed getting to know Hungarian cuisine and culture. When arrived here last year I saw how friendly everyone is here, and I also appreciate the fine buildings and great history.

4. Friends are in Budapest for a weekend - what must they absolutely see and do?
A walking tour around downtown, for example to see the Opera House, Parliament and the Castle.

5. What is your favourite Hungarian food?
Goulash as a main dish, as mentioned I’ve been enjoying it since the 80’s. For breakfast I like körözött, you know the spicy cheese spread with paprika.

6. What is never missing from your refrigerator?
Actually I don’t have one, I have mostly been living in hotels since 2009. This spring I may well get an apartment here in Budapest

7.What is your favourite Hungarian word?
Felébredt? (Are you up?)

8. What do you miss most from home?
Memories, from where I spent my first years in the Holy Land, such as my parents and people from school, and others from that part of my life.

9. What career other than yours would you love to pursue?
Anything really that deals with people. I worked in a regional office for 14 years, and I heard that a promotion is on its way and that would require moving to a corporate office, and I would not have liked that. I prefer any job where you can regularly be with people and look after people, and interact with them, like in an airline or in most parts of the hospitality business.

10. What's a job you would definitely never want?
I would not like to be an accountant although I like figures, I even have a passion for them, but if you work as an accountant you have to do the ’things right’ and in life I like to do the ’right things’.

11. Where did you spend your last vacation?
With my family in Aqaba, Jordan.

12. Where do you hope to spend your next holiday?
I plan to drive my ladies, my wife and two daughters, around Europe.

13. Apart of temptation what can't you resist?
Cigars. I used to have at least 5 per week, but here it is not easy to smoke so much due to thefact I live in a non-smoking hotel.

14. What was your favourite band, film, or hobby as a teen?
I like most Lebanese music. I am not really into movies, and only watch a film while on the plane, and when I do I like watching Arabic films (often the same ones over again). My hobby was gardening, especially flowers.

16. Book or movie?
I prefer reading, not necessarily books.

17. Morning person or night person?
A very early morning one.

18. Which social issue do you feel most strongly about?
People in general, I tell my children to help anyone in need, as by helping others so God will give you what you need.

20. What would you say is your personal motto?
Always aim to be the number one.