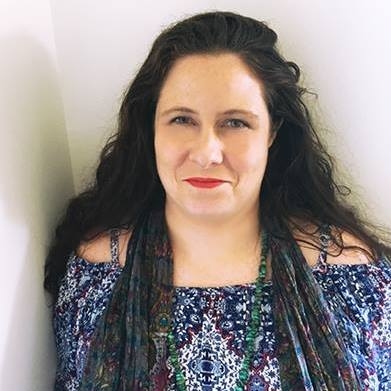 Jennifer Walker is a British-Hungarian writer, whose sordid past includes a PhD in nuclear physics. She has has since thrown caution to the wind and works as a writer full time.

She works as a copywriter at an ad agency by day, but also freelances by authoring guidebooks (she is just putting the finishing touches on Moon Travel Guide's Prague, Vienna & Budapest book as co-author for the Budapest and Vienna sections) and writing articles for a range of international publications, and her work has appeared in Lonely Planet, National Geographic Travel, Conde Nast Traveler, BBC Travel, CNN Travel, Oxford Dictionaries, among others.

She is also one of the editors of Panel Magazine, a new Budapest-based literary magazine focussing on contemporary literature and art from Central and Eastern Europe.

1. When did you arrive in Hungary and what brought you here?
My mother is Hungarian, so I think I first visited Hungary when I was two (judging by the photos of me as a toddler outfitted in folk clothing proudly holding a chicken I caught in a village somewhere in Borsod). I moved here properly at age 8 (my mother wanted me to learn the language whether I liked it or not so put me in state school here), I went back to the UK at 11. I then returned 5 years ago partly to reconnect with my roots, but also because my plan A fell through, which was to move to Istanbul.

2. Have you ever been an expatriate elsewhere?
Yes: Germany for a year, Spain for 7 years, plus a few months working in Georgia and India.

3. What surprised you most about Hungary?
I lived in Hungary as a kid, so I don’t think there is anything that surprises me. Plus since my family is from Ózd in north-eastern Hungary, if you've been there as much as I have you become desensitized to culture shock. Although last time I took the bus up there the guy in the seat next to me started sharpening his knife (and then cut his szallonna/bacon for lunch), which was an experience.

4. Friends are in Budapest for a weekend - what must they absolutely see and do?
I always ask people “what are you into?” If bars are their thing I may take one for the team and take them to Szimpla - it may be a tourist hot spot but it’s still spectacular if you’ve never been and I remembered being wowed when I first walked in. The baths are great, too, but I love taking friends to the Children’s Railway or on the BKK boat on the Danube. I also think a hike up Gellért Hegy is a must. I do need to reign in my obsession with architecture some time, as I realise not everyone will want to go to Zugló just to see a Lechner building.

5. What is your favourite Hungarian food?
Sztrapacska, which I know is technically Slovakian, but my mother is from Ózd, which is perched on the border and you can get amazing Sztrapacska there.

6. What is never missing from your refrigerator?
Wine or cheese. Preferably both.

7. What is your favourite Hungarian word?
The 12 year old British in me says “Ifjúság”. My father stayed in the Hotel Ifjúság when he came to Hungary in the 70s and thought it was the most hilarious thing ever and loves to repeat that story. I love innocent words in one language that sound filthy in another.

8. What do you miss the most from home?
Helpful and friendly customer service.

9. What career other than yours would you love to pursue?
I’ve already gone through a few career changes and feel I’m getting too old to do so again. I’ve been a nuclear physicist, an English teacher, and I’m hoping I can stick with writing for a while. I would love to travel the world and follow things that fascinate me, but not sure what career would allow for that. Or an event planner - I’m good at putting events together. I host a few literary events (like the Budapest Friday Night Stories along with my friend Masha Kamenetskaya - we're doing the next one 12 October at Massolit so come on by *ends shameless plug*) and my dream is to throw a Surrealist-Dada Ball.

10. What's a job you would definitely never want?
Anything that involves working with children. I really, really respect people who do, but I could never do that.

11. Where did you spend your last vacation?
Pretty much all my travels this year have been to Austria for the book I’m working on. I think I’ve been to Vienna 10 times in the last 12 months, with a trip to Salzburg, Linz, and Baden, and not much else (Ózd doesn't count).

12. Where do you hope to spend your next one?
I have plans to go to India again early next year, let’s see if that works out. My dream destination is Uzbekistan though and I will make it there some point.

13. What was your favourite band, film, or hobby as a teen?
I became obsessed with astronomy when I was 7 and then got into physics after reading Stephen Hawking’s “A Brief History of Time” when I was 14 and my life goal was to build a space ship (oh how dreams die). I actually did try to pursue that career - my undergraduate degree is in physics with satellite technology, but somewhere things deviated and I ended up doing a PhD in nuclear physics.

14. Apart of temptation what can't you resist?
Cats

17. Morning person or night person?
I’ve been in denial about this, but I have come to the realisation I have become a morning person.

18. Which social issue do you feel most strongly about?
Women's rights.

19. Buda side or Pest side?
Both have their charms. I've lived in Buda for the past 5 years so I guess I'm team Buda.

20. What would you say is your personal motto?
Everything has a solution and where there is none, there is wine.