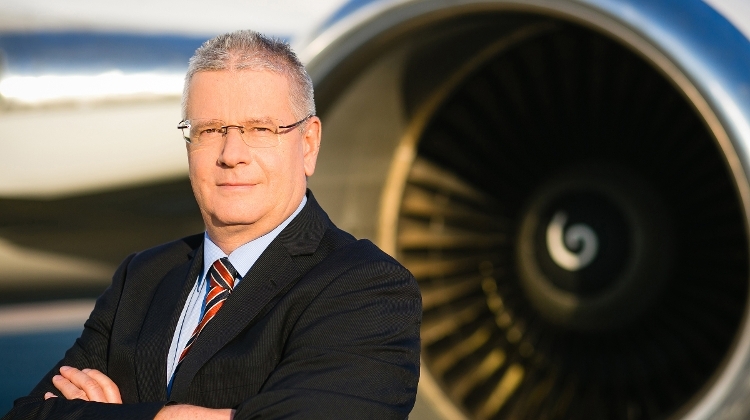 Mihály Hardy has been working as a Communication Director of Budapest Airport for the past 11 years (joined BUD in February 2008). He started his career as a TV-journalist specializing in news and current affairs and foreign reporting with then-MTV or Magyar Televízió.

Between 1985 and 1991 he worked as Moscow Bureau Chief of MTV; as a correspondent he has covered stories ranging from Chernobyl to the war in Afghanistan, the glasnost and perestroika period of the Soviet Union.

In 1997 he left public service TV and moved to commercial TV3 as news anchor and news director, later from 2004 worked as news director of ATV. In 2006 he joined Tesco Hungary as communication director.

Mihály Hardy has journalist background, he graduated from the Institute of International Affairs (MGIMO) in Moscow in 1980; he speaks Russian, English and Spanish. He is married and has 4 children.

His hobbies include aviation, dogs and hunting, history and photography.

1. Where did you grow up?
I grew up in Hungary, in Buda in the family of chemical scientists (both parents). My mother was Russian, so I grew up knowing and using two languages. Big advantage.

2. If you could be an expat anywhere in the world, where would you choose?
I guess anywhere, provided I have a return ticket to Hungary. However Nordic destinations may have a slight advantage in my eyes like Scandinavia or Iceland.

3. What would you miss most if you moved away from Hungary?
Certainly the Hungarian forests, the mountain trails in the Zemplén and of course the unmistakable kerosene smell of the airport.

4. Friends are in Budapest for a weekend - what must they absolutely see and do?
They should visit a spa, Széchényi, Rudas for that matter or Gellért, they must walk the Buda Castle district (my favorite place in high-school times for a romantic walk), they should take a walk on Margit-sziget and have a drink or two somewhere in Gozsdu-udvar.

5. What is your favorite food?
I love chili con carne, and I prepare it myself too, sometimes for thirty-odd people during skiing in Tirol.

6. What is your favorite sport / form of exercise?
Alpine and Nordic skiing, bicycle and trekking.

7. What is your favorite place in Hungary?
There are lots of them, but perhaps the nicest area is the Zemplén mountain range and Tokaj.

8. What career other than yours would you love to pursue?
I would choose the job of an airport communication director perhaps. But seriously: I think I would love teaching communication or maybe would love to become a professional hunter in Africa.

9. What’s a job you would definitely never want?
I would never do anything that has  numbers or mathematics: the job of a financial controller or accountant would be a real punishment for me.

10. Where did you spend your last vacation?
It was a boat trip in the Caribbean with Costa Cruises, to places like St. Kitts and Nevis, Antigua, Martinique and Guadeloupe. Perfect in February. Crossed out from my bucket list.

11. Where do you hope to spend your next one?
It must be skiing in Fiss, Tirol – we go there with my wife for the last 19 years for the first or second week of every December. This is our escape from the collective madness called Christmas shopping.

12. What was your favorite band, film, or hobby as a teen?
I grew up on the Beatles (this was the first reason to learn English), my favorite movie was Easy Rider and my hobby used to be the construction of historic scale aircraft models (surprise-surprise!).

13. Apart of temptation what can’t you resist?
I can resist anything, but for God’s sake why should I?

14. Red wine or white?
Both. Preferably the red should be a Californian Zinfandel or a Sangiovese from Italy, the white should be an Irsai Olivér from Nyakas winery or a Grüner Veltliner from Austria.

15. Book or movie?
Rather a book, however with almost 3 decades of TV background moving pictures are okay too. My favorite book is Mikhail Bulgakov’s Master and Margarita.

16. Morning person or night person?
Morning person, my radio wakes me up at 6.00 hours every day. I do breakfast for my son of 17 years and walk him (and our West-Siberian laika) to the train. I return with the dog.

17. Which social issue do you feel most strongly about?
Refugees and international migration. It is not just by chance that I used to work for UNHCR in 1994 as a public information officer during the Bosnian crisis.

18. Buda or Pest side?
I grew up and was raised on the Buda side, later moved to Pest, but nowadays neither side. This city is overcrowded for me, so we moved out to the South in Dunaharaszti. Thanks to the M0 highway there might be long weeks until I get anywhere nearer to the city center than the airport.

19. Which achievement in your life are you most pleased about?
My four kids, of whom only one (a teenage guy) lives with us, two are expats in their own right around the world – in Spain and Bolivia, the fourth works for a Turkish ground handler here at the airport.

20. What would you say is your personal motto?
Always look on the bright side of life… - familiar, eh?