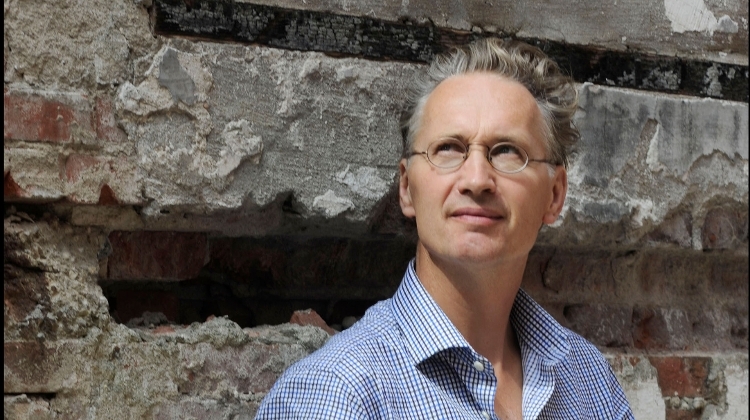 His books and stories are translated into German, Croatian, English, Italian, Hungarian, French and Romanian. The Hungarian editions were published by Corvina,  (most recent: Spengler Törvénye), English ones by Helena History Press, distributed by CEU Press.
Website: www.comradebaron.com

1. When did you arrive in Hungary and what brought you here?
Summer 2003, the same reason all creative foreigners end up in Hungary: falling in love with one of these stunning exotic Hungarians.

2. Have you ever been an expatriate elsewhere?
Not really, I have lived once 3 months in Paris as a student, doing an internship at the design department of Philips and feeling lonely and lost in that huge, unkind city, chasing half hearted and tossy Parisian girls, with limited success.

I have moved very often within the Netherlands and within cities. I moved about 25 times. I grew up in Twente, with a mother alone and 4 brothers. We all lived longer or shorter abroad; it is expected in our family, a rite de passage. These lines of a poem by Friedrich Schiller were the life-motto of my great-great-grandfather and all his descendants still obey to it:

He saw it as the only possibility for the Netherlands to compete with rest of the world. Go out into the world and learn! There is nobody in my wider family who has not lived or studied abroad. Half of my mothers family lives on Ceylon (they went there to start tea plantations).

3. What surprised you most about Hungary?
I was most impressed by the hidden tenacity of the Hungarians; I think generally people in Central and Eastern Europe are much tougher than us, spoiled Westerners. For a few exceptions, we Dutch nowadays all have girls-hands: sweet, soft and pink. I like very much the old fashioned chivalry of the Hungarians. The hippie revolution of the '60 killed in the West the idea of chivalry - a loss in my eyes.

4. Friends are in Budapest for a weekend - what must they absolutely see and do?
Depending a bit on who they are. I have very different sets of friends. My writer friends and actress friends I take for a coffee to Massolit books and afternoon drinks at Csendes.

Friends with small children have to visit the zoo and have to see - more than all the sleepy animals - the superior waste bins designed by Kós Károly which look like old fashioned robots that will walk after closing times to the central waste collecting point and empty themselves.

Friends with older children with a lack of historical knowledge I bring to the Terror Ház and in the evening to the ruin bars. Friends from my student years, these Dutch noisy fraternity types, I take for black tie dinner in the Roth Miksa winter garden in the Writers Villa at Svábhegy, in my opinion by far the best and most beautiful place for a private dinner in Budapest - but it might be I am bias.

And all friends I take in the night to Brody Studios, to drink and dance.

5. What is your favourite Hungarian food?
Well, this will make me hated by the Hungarians, but I think its time to realize that the existing local perception and conviction that the Hungarian kitchen is something close to the culinary zenith in Europe, or even the world, is, well, a bit of a mistake. Hungarian food is just like the Dutch kitchen, fine food after a hard day of work at the fields, after a long summer day of haymaking, but let’s forget the idea this is superior food. It’s time to get our feet to the ground in that aspect. Nevertheless, I love a fat lángos with sour cream and cheese, especially at 3 in the morning. I love a well made almás-rétes. I love hot paprikás. I especially love Madártej as a dessert.

6. What is never missing from your refrigerator?
A bottle of Hungarian extra dry pezsgő.

7. What is your favourite Hungarian word?
Lusta. All the joy and lust of being lazy is in that word. The Dutch word for being lazy is `lui' which is full of guilt. We Dutch, well most of us, do not tolerate from ourselves to be lusta. We have this annoying North European work ethic.

8. What do you miss the most from home?
Not too much really. The Netherlands is close. I can always walk home. But friends and the Dutch humour. In another country it is hard to really understand each other, the refinements of another culture - its very easy to miss. Further, well, my family, my brothers. My last published book in Hungary is pretty autobiographical, Spengler Torvénye. It is about five brothers who like to fight, do not talk a lot, except boasting about fights from bygone times. Its about how they handle it when one of them is terminally ill and dies: silent men and emotions.

9. What career other than yours would you love to pursue?
Environmentalist. The state of the world and specially the nature is disquieting. I think this feeling is shared by many but its difficult where to start, what to do. The capitalist idea of constant economic growth is an extreme destructive concept - as a boy of 14 I already realized. And to be honest, now, 40 years later, I have done close to nothing to change it. I would like to put more energy there.

10. What's a job you would definitely never want?
I do not fit in very well into offices. Being an accountant or a civil servant and checking numbers seems pretty hellish to me.

11. Where did you spend your last vacation?
Transylvania, we made a horse-riding trip in May with a group of 12 Dutch friends along many of the places I visited to do research for Comrade Baron, the book I wrote about the destiny of the Hungarian aristocracy in Transylvania after the Romanian communists took over. I introduced my friends to a few of the aristocratic families and we spoke with Romanian dissidents in Bucharest. It made clear to all how the former communist dictatorship still has its effect on the current society.

12. Where do you hope to spend your next one?
Ethiopia. I currently work on a book that is set partly at the sugar-factories that my grandfather build in Wonji and Shoa in the 1950's.

13. What was your favourite band, film, or hobby as a teen?
In my late teens I loved to dance on `She drives me crazy' of the Fine Young Cannibals, at that time in my life the movie `Paris Texas' of Wim Wenders touched me deeply (screenplay by Sam Shepard), clearly because my parents divorced when I was very young and I saw my father afterwards sporadic, basically he was gone.

From 8 till 12 I spent every free minute in nature, from 12 till 15 I played a lot of golf, and between 14 till 18 I was doing Tae Kwondo and Karate intensely. At age 20 the dream to become a writer grew in me.

14. Apart of temptation what can't you resist?
Sweets and women.

16. Book or movie?
Clearly a book. No better way to get close to somebody else’s soul.

17. Morning person or night person?
Morning, Mostly I wake at 7, in summer a bit earlier, at 6, sometimes at 5, like a good peasant.

18. Which social issue do you feel most strongly about?
Mentioned above: nature, climate, destruction of this world by us, beautiful humans.

19. Buda side or Pest side?
I love the fresher air of Buda, but now we are in Pest, I love to move around by bicycle.

20. What would you say is your personal motto?
It is an East European gypsy saying: a dog that walks finds bones.