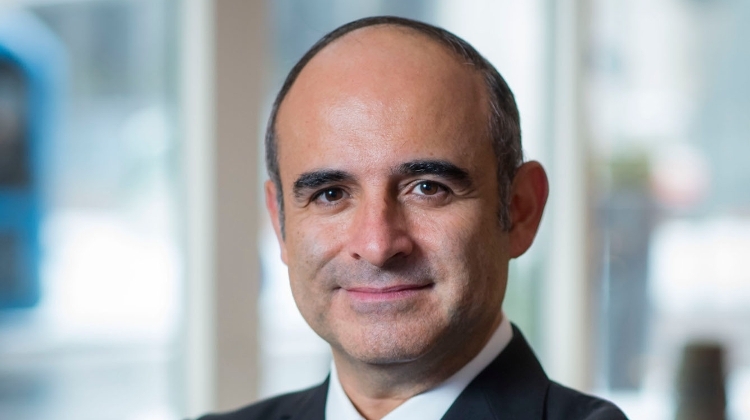 As the new GM at The Ritz-Carlton, Budapest he is responsible for overall hotel performance and operations. With his extensive experience in the hospitality sector, he will continue to grow the hotel’s prominent position within the local, regional and international markets.

Hugo is a well-known and highly qualified hotelier professional, recognized for having exceptional leadership skills and business acumen. In total, he has 28 years of experience in the hotel industry, with 10 years in Luxury Brands. He has led teams in all aspects of the hotel operations and brings with him, an intimate knowledge of managing luxury hotels.

He has worked in several locations, including Spain, Ecuador and Mexico. In his past role, held since 2015, Mr. Lecanda was responsible for managing the iconic The Ritz-Carlton, Abama in Tenerife Spain. Throughout his Marriott and The Ritz-Carlton journey, Mr. Lecanda has played an instrumental role in the opening of resorts and hotels.

Over his, nearly 3 decades of experience in different positions, at various locations, he has demonstrated his professionalism through several leadership and team excellence awards, while leading the hotel and his team to success. He was named GM of The Year, Marriott Luxury Europe in 2015, in 2013 he received the 5 Diamond Award for the Caribbean and Latin America Region, as General Manager of The Ritz-Carlton, Cancun and was also recognized as Best GM in Spain, by Luxury Institute, in 2016.

1. When did you arrive in Hungary and what brought you here?
At the start of this year, on 9 January. It is a great opportunity to be here as the General Manager of this fantastic hotel. Budapest is an amazing destination, in fact the ‘Top European City in 2019’.

After four years in Tenerife running The Ritz-Carlton, Abama, for my next challenge I was looking into going to a place where I would find a city full of cultural life. I found it in Budapest, and not only that this is one of the top hotels in Europe.

So knowing this hotel, when opportunity rose I was the first to raise my hand. I am glad to have the opportunity to continue my career here, and contribute to the hotel’s growth, so I am very grateful with Al Habtoor Group and the company as well.

2. Have you ever been an expatriate elsewhere?
My first international assignment was in Quito City in Ecuador, a city that has lots of diplomats, petroleum companies and other major corporations. It’s a special city, 3000m above sea level, and it was a great place to live and work.

Then I was promoted to the GM position in Cancun, Mexico at the coveted AAA Five Diamond The Ritz-Carlton, Cancun. My following assignment was in Spain at The Ritz-Carlton, Abama in Tenerife considered as one of the top resorts in Spain with 450 rooms, a championship golf course, Tennis Academy and two restaurants with Michelin Stars.

3. What surprised you most about Hungary?
The genuine care and warmth of the Hungarians, the safety levels of Budapest, the energy in the city and the amount of activities and variety of food and festivals year round.

4. When did you first visit Budapest, and what did you see and do?
I was here in July last year during the World Cup when Mexico played Germany, and it was a great experience!  I noticed the genuine care Hungarians have for guests, making sure people have a good time.

5. What is your favorite Hungarian food?
Goulash soup. I love spicy soups, and we have similar ones in Mexico. Actually, the spicy side of Hungarian kitchen really reminds me of Mexico. The wines as great as well!

6. What is never missing from your refrigerator?
Hungarian white wine. Any kind. I am discovering so many. Also the cheese. I like going to the market near Allee. The fresh cheese, and the fermented cabbage, the pickles, and sausages fascinate me – some are similar to chorizo.

7. What is your favorite Hungarian word(s)?
I like so many, like ‘minden finom’, and also ‘kivánok’ as in  ‘Jó reggelt kivánok’. In addition ‘szeretnék valamit enni’. I play a CD in the car every day to catch new Hungarian words.

8. What do you miss the most from home?
Tortillas. Hard to find fresh corn tortillas here. In addition, peppers, the spicy ones like habanero.

9. What career other than yours would you love to pursue?
A doctor. I like medicine – it intrigues me how the human body can heal itself, but sometimes it needs help. A hotel has similarities to a hospital, it’s a 24 x7 environment, and just when you think you’ve seen everything then something new happens!

11. Where did you spend your last vacation?
I spent it in Mexico, a week in Playa de Carmen.  To celebrate my birthday and play golf with my friends.

12. Where do you hope to spend your next one?
I would like to go to Balaton and to discover more cities in Hungary.

13. What was your favorite band, film, or hobby as a teen?
Band: U2. Movie: Schindler’s List. Hobby: Martial arts

14. Apart of temptation, what can't you resist?
A good glass of Casa Dragones Tequila, straight.

15. Red wine or white?
White. Any from Tokaj or Albarino from Galicia – super value, and great with sea food in Spain with some tapas.

16. Book or movie?
I prefer a book. The last one I read (for the third time) was ‘The 7 Habits of Highly Effective People’(Covey).  I use the concepts frequently in my meetings and sessions, our company believes in Covey concepts.

I also recently read ‘The Four Agreements’ by Miguel Ruiz simple but compelling and so true.

18. Which social issue do you feel most strongly about?
We were at the Food Bank recently in Hungary with other GM’s, and hunger relief is a big focus in our Community Footprints programs since for example kids cannot learn if they do not have basic needs met.

19. Buda side or Pest side?
I love both. It is like yin and yang. You need the vibrant energy and the relaxing moments in life.

20. What would you say is your personal motto?
I identify with this, ‘The reward for work well done is the opportunity to do more’, it’s by Jonas Salk.