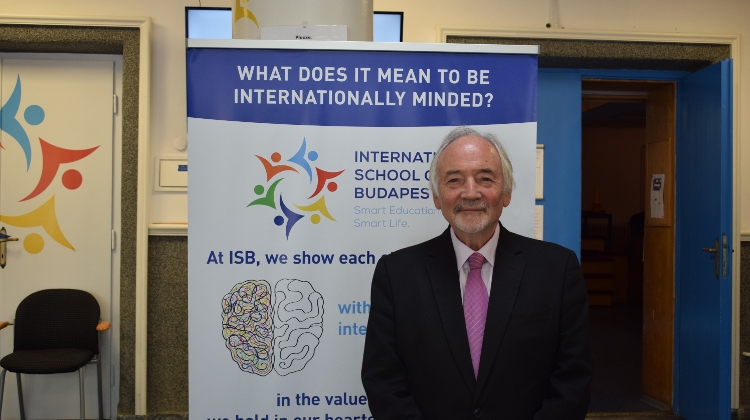 John has lived with his Hungarian wife in Budapest since 2010. Before moving to Budapest, he spent 18 happy years as the Headteacher of two large comprehensive schools in the North of England.

Following this he worked as an Educational Consultant for Nord Anglia Education, working in China and the UAE.

This work eventually brought him to Budapest where he enjoyed three happy years as Head of the Secondary School at BISB.Nord Anglia then asked him to be Vice Principal of their school in Abu Dhabi.

After a year there he returned to Budapest as the founding Principal of Budapest British International Academy when, in 2015, it opened in District 12.  He continued in that position when the school relocated to District 2.

He is currently very much enjoying being the Principal of the International School of Budapest in District 12.


1. When did you arrive in Hungary and what brought you here?
I arrived in Hungary in 2009, working as an Education Consultant for Nord Anglia Education. Meeting my future wife, who is Hungarian, is principally what keeps me here, in addition to enjoying working at the International School of Budapest.

2. Have you ever been an expatriate elsewhere?
Yes in Abu Dhabi in the UAE. A very different, but nevertheless enjoyable, experience. The fact that on two occasions the school shut because of heavy rain caused us British teachers some amusement. But of course, it does not rain very often in Abu Dhabi.

3. What surprised you most about Budapest?
I was very pleasantly surprised about how safe I felt in the city, even very late at night and after ten years here I still feel the same.  The contrast from my feelings in many English cities is considerable.

4. Friends are in Budapest - what must they absolutely see and do?
Spoilt for choice. It would take many weekends to appreciate all that is good about Budapest. Nevertheless, I would certainly suggest one of the baths, a ruin bar or two, the House of Terror, and a visit to Margaret Island on the Sunday.

5. What is your favourite Hungarian food?
Slightly ashamed to admit that I really enjoy goose foie gras.

6. What is never missing from your refrigerator?
Ice for my malt whisky.

7. What is your favourite Hungarian word?
“Kezét csókolom” Because it is so suggestive of a gallant and chivalrous manner which is distinctly lacking in much of modern-day society.

8. What do you miss the most from home?
I could say the clear sighted and thoughtful approach to the Brexit negotiations. If only!!! More honestly I do miss the convivial atmosphere of a traditional English pub, preferably within sight of the sea, which I also miss.

9. What career other than yours, would you love to pursue?
Any which did not involve getting up at 6.00 in the morning. Consequently I am looking forward to enjoying a career as a happy retiree.

10. What’s a job which you would definitely never want?
Speaking as someone who has spent his entire career in education, I can say with absolute confidence that I would never want to be an infant school teacher. All such teachers have my deepest admiration as there never appears to be a moment’s peace in the classroom throughout the entire school day.

11. Where did you spend your last vacation?
Jammu in Kashmir, India.

12. Where do you hope to spend the next one?
The same place as I support a school in Jammu.

13. What was your favourite band as a teen?
Clearly revealing my age, the band which I most enjoyed watching and listening to was The Rolling Stones.

14. Apart from temptation, what can’t you resist?
Completing a questionnaire! More seriously I would say enjoying a good night out with friends in a bar in Pest.

15. Red wine or white?
Chilled white in summer and red in winter.

16. Book or Movie?
Having been an English teacher I have no doubt that I always prefer a book.

17. Morning or night person?
Unfortunately, a morning person because of work commitments, but in the future, I intend to become more of a night person, so that I can enjoy many of the nightlife attractions of Budapest.

18. What social issue do you feel most strongly about?
One of the biggest challenge facing pupils in international schools across the world today is that of unintentional emotional neglect by parents. This is a mainly a consequence of 24/7 work demands which are now placed on so many parents. Schools have a huge responsibility to support both their pupils and also the parents as the deal with this huge challenge.

19. Buda side or Pest?
I have always enjoyed living in the peaceful hills of Buda.

20. What would you say is your personal motto?
Perfectly expressed by Robert Browing – ‘A man’s reach should exceed his grasp, or what’s a heaven for?‘