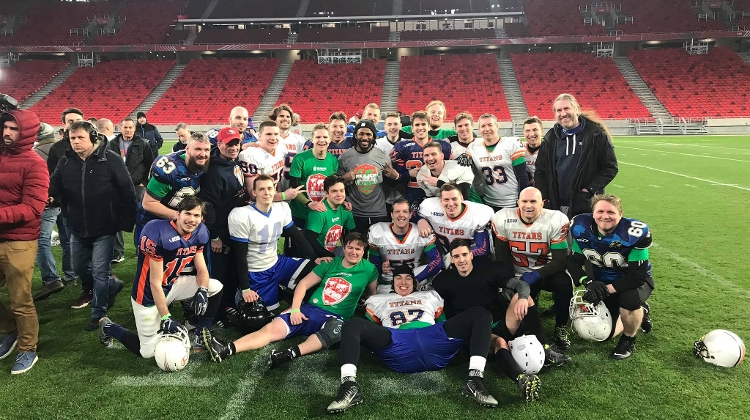 Krisztián is the President, Head Coach, and QB of Budapest Titans. He founded the club and has been running it successfully for fifteen years.

When he is not on the field or building the Hungarian American Football community, Krisztián likes to spends his time with his family. During the Covid restrictions he helped homeschooling his three children and now social distancing is getting less strict he is ready to take some time off and explore Hungary with them.

Krisztián believes in building a community based on respect, individual and team development, and the love of the game.

The Titans are one of the most successful teams in Division 1 of the Hungarian Championships. We practice in Óbuda and celebrate 15 years of Titans Football this year.

3. What would you miss most if you moved away from Hungary?
My family, my friends and my team. My three kids would definitely travel with me and enjoy the adventure but relocating a whole team would be pretty difficult. What keeps me here is the same thing that would be so appealing there: being with my loved ones and playing American football.

4. Friends are in Budapest for a weekend - what must they absolutely see and do?
Budapest is the city of baths and beaches and now the pandemic restrictions are lifted beaches can finally open. One of summer’s most popular things is beach flag football, non-contact American football played in the sand similarly to beach volleyball.

To cool off and chill I would take them to one of the bars with a beautiful view of the city by night where they could get a taste of delicious food, good wine and Budapest nightlife.

5. What is your favourite food?
Nothing can be as good as real homemade schnitzel.

6. What is your favourite sport / form of exercise?
No surprise there: American football. It’s my favorite because it builds a team, a community where everyone (no matter what age or bodytype) can find their place. We build strategy together, fight for victory together and then we celebrate together or grow together, learning from our mistakes.

7. What is your favourite place in Hungary?
There are so many places in Hungary worth visiting. But this year we had the possibility to practice with real NFL players in Puskás Ferenc Stadionban thanks to the initiative of AFWB (American Football Without Borders). Practicing with world-class players in a world-class stadium – it was a defining experience for both the team and myself.

8. What career other than yours would you love to pursue?
I would coach the Budapest Titans full time and participate in the coach training process. I am president of Budapest American Football Association (Budapesti Amerikai Futball Szövetség) and I would be able to dedicate even more time to my work there.

9. What’s a job you would definitely never want?
All jobs deserve respect when done meticulously but maybe I would skipp being a lawyer.

What I am looking for in my work environment is respect that all the members of the community can feel. This is what I build the identity of Budapest Titans on – so whatever position you may have on our team your efforts will always be respected.

Carolina Panthers, my favorite team played against Tampa Bay Buccaneers. It was fantastic to see this exciting game and feel the vibe in London’s most modern arena Tottenham Hotspur Stadium.

We have been planning a family trip to the USA in the NFL season for a while. Judging by the international pandemic situation this is not a real possibility right now. For the time being we are happy to go on a vacation within Hungary and spend time in the Balatonfelvidék area. My team will also have a training camp at the Balaton in August. For me training camps are a form of recreation because I can do what I like doing the best.

The Budapest Titans training camp is a real community event where in addition to the high level professional trainings team members also get to know each other.

As a teenager I liked harder stuff but with lyrics that carried real meaning. I already knew I was in for quality, intelligence and hard hard hits. I also liked concerts and events. Later on I had the same experience with American football: commitment, strategy, hard knocks and exciting games.

A good book when I’m alone and movie when on a date with my wife.

I’m a night person. This is great because NFL games start late at night Budapest time and end early in the morning. I watch all the games with my family, friends and teammates.

The inequality in the distribution of wealth because it results in huge social differences. The Budapest Titans always stand united in helping those affected by social inequality.

Csepel island – right in the middle. But we practice in Buda in the Panoráma Sportközpont (Budapest, Kolozsvári Tamás u. 11, 1023). If you live on the Buda or the Pest side or in the countryside you are always welcome to join our team and community.

I’ve been leading and coaching the Budapest Titans American Football Team for fifteen years and this is unequaled in Hungary. I’m very proud of my team and that I got the chance to help American football become a recognized sport in Hungary. I also had the pleasure to coach Hungary’s Junior National Team, I’m advisor to the Hungarian American Football Association and president of Budapest American Football Association. My greatest success however is that all members on my team turn to me with trust whenever they need professional or personal advice. This is always a great success for a coach.

20. What would you say is your personal motto?
Go Titans! (or maybe No Pain No Gain? )