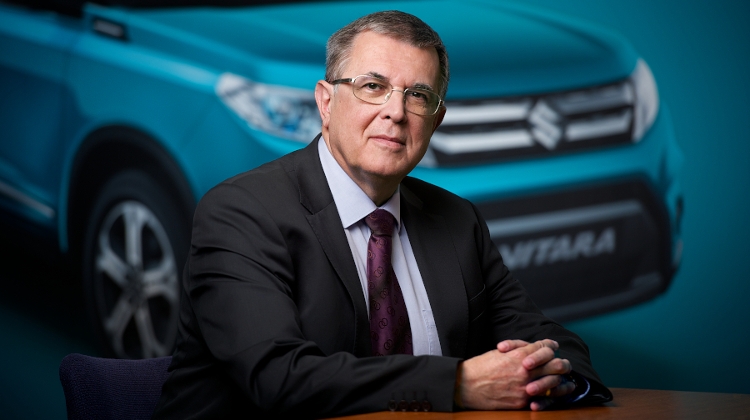 Commuting every workday from Budapest to Esztergom, he is currently the Deputy CEO of Magyar Suzuki Zrt. (MSC).

Mr. Urbán's direct responsibilities include the development of the Hungarian government and the automotive industry relations of the MSC and oversees the Company’s innovation activities: last year these were completed by the supervision of corporate communications activities.

In the first half of his career, he worked as an economist in the International Division of the National Bank of Hungary (MNB) and at different subsidiaries of the MNB abroad. From the turn of the Millennium by the end of 2010, he was a member of the Supervisory Board of the MNB.

He speaks four languages, English, French, German and Russian, in addition to his mother tongue, Hungarian. In 1993, he received a PhD in economics.

1. Where did you grow up?
I was born in Angyalföld, a traditional worker’s district near the Váci út factories. My parents worked in the famous Láng Gépgyár, my mother for about 30 years and my father for about 40 years. My mother attended night school courses and when she was 36 she got a diploma in economics.  This inspired me to also become an economist, I had a scholarship at the National Bank of Hungary.

My specialization was International Finance, and I started to work for the National Bank here in 1977. Then I was called to the army and spent 1.5 years there in a special division. At that time I was in the middle of a house construction and my son was born that year. This was a most difficult time for my family.

In 1980 I went back to the National Bank, until 1998. I also worked abroad in my early career, such as for four years in Moscow at IBEC (International Bank for Economic Cooperation) as Deputy President responsible for Convertible Foreign Exchange Operations.

From 1995 I worked in Frankfurt and Vienna, 2 years each, also on behalf and in subsidiaries of MNB.

2. If you could be an expat anywhere in the world, where would you choose?
The French Riviera – the first foreign language I mastered was French.

3. What would you miss most if you moved away from Hungary?
I have worked quite a lot abroad and I always missed the Danube, and the view of the Buda Castle, it was often in my mind, so whenever I came back, and had the chance, I went to the river and walked between the Chain and Elisabeth bridges.

4. Friends are in Budapest for a weekend - what must they absolutely see and do?
Partly this links to my previous answer. Of course I would show them the most famous places of the city, also I think not too many people know and would go to Kiscelli Museum - where there is so much information about the past of Budapest, explaining in a way people can easily understand why things here are the way they are now.

5. What is your favourite food?
Rántott csirkecomb (fried breaded chicken), however I like nearly everything - wherever I went abroad I always tried the local food.

6. What is your favourite sport / form of exercise?
From my childhood it has been football. Not professionally, but wherever I was, on the streets, at the university, I always played football. I played in the ‘Suzuki Old Boys Team’ until 5 years ago when my right leg got injured. I also played and enjoyed basketball.  These days I just watch football, and do morning exercises, such as do push ups - I used to do 50 but won’t say how many I do these days 😉

7. What is your favourite place in Hungary?
My family has a house at Balaton, unfortunately not on the beach, but 10 minutes from it, and that’s been favourite place for the last 15 years. I also like Börzsöny, Kismaros, Börzsönyliget - that area is really nice and also not too well known or crowded.

8. What career other than yours would you love to pursue?
I have to go back to my beginnings to answer this one, because in secondary school I dreamt about an engineering career, but I did follow that route for two reasons. First the influence of my mother, as mentioned, also I was afraid of technical drawing, so I gave up on my original idea and became an economist.

Having said that, I am and have always been ‘crazy about cars’, at 15 I already had a small motorbike, and my first car at age 20 was a Trabi - it was very old and if it had any issue I repaired it with my own hands.

Now I am responsible for innovation management at Magyar Suzuki, and technical development under the management of the board of directors, and this is because of my attraction towards the technical side of things.

Also I may add, I always wanted to do legal studies, but I never had the time and it is too late now.

9. What’s a job you would definitely never want?
I’m the kind of man who tries to find the interesting side of everything, even if it is a difficult task – however I can say I do not wish to clean the streets.

10. Where did you spend your last vacation?
I spent 5 or 6 days at Lake Balaton in Aliga, which is part Balatonvilágos. Our grandsons were there during the summer time, which is why we don’t travel abroad any more, as we’re supervising them so their parents can travel in the meantime.

11. Where do you hope to spend your next one?
I would go the Indian Ocean somewhere, like Seychelles, Maldives or one of those islands since have always dreamed of going there.

12. What was your favourite band, film, or hobby as a teen?
There was an Italian film I greatly enjoyed called Brancaleone's Army. My hobby was football. Back then I listened to Luxemburg Radio and Free Europe Radio. I loved and I still listen to Jimmy Hendrix, Queen, and other quality rock. I really liked Jennis Joplin as well.

13. Apart of temptation what can't you resist?
I can resist everything but temptation! 😊

14. Red wine or white?
Reds from the Villány region.

15. Book or movie?
Earlier it was books, but these days I watch movies. I’d read everything that I wanted to read by my mid-20s, then work and family took the time away from reading.

16. Morning person or night person?
It depends on the situation.

17. Which social issue do you feel most strongly about?
Whenever I went to the West, I saw everywhere that handicapped people are treated much better than here in Hungary. We seem to be hiding them here. In Germany, Austria, France or in the UK, you can see that they are cared for, they on the streets, and enjoy an open life with their friends. This is the most important issue for me.

18. Buda or Pest side?
Buda since I can easily make excursions from there, I really like Buda very much even though I was born and raised in Pest. 22 years ago my family moved to Buda, until then it was always a kind of temptation!

19. Which achievement in your life are you most pleased about?
For 4 years I worked as the Head of the International Capitals Markets Department at the Hungarian National Bank, and I am proud that I could add to the development of my country.

During those years, and especially in 1991, it was a very difficult time not just for the bank but for also Hungary with the highest inflation rate ever and 1.5 million jobs lost.

The Foreign Exchange department followed the Russian policy until that time, meaning it had a fixed foreign exchange management. The reserves of the National Bank were close to zero since they sold their gold reserve. The debt rate was very high, and the Hungarian currency was not convertible then.

As part of International Capital Markets team we looked around for a new solution to solve this debt handling process, and found the International Bond Insurance, so we started refinancing the debt to avoid the insolvency of the Hungarian State.

We made a lot of roadshows to sell bonds issued by the National Bank but practically on behalf of the Hungarian state as a sovereign borrower.

I do not want to be overly modest, but by the end of 1994 – 1995 we’d made an excellent job of it and the Forint Exchange reserve by early 1995 was already 4.5 billion dollars, and we saved Hungary from the insolvency.

As an economist, this was the peak of my career in business banking.

20. What would you say is your personal motto?
I have two: ‘Never give up’. And I keep repeating this to my colleagues, ‘Everything is related to everything’.