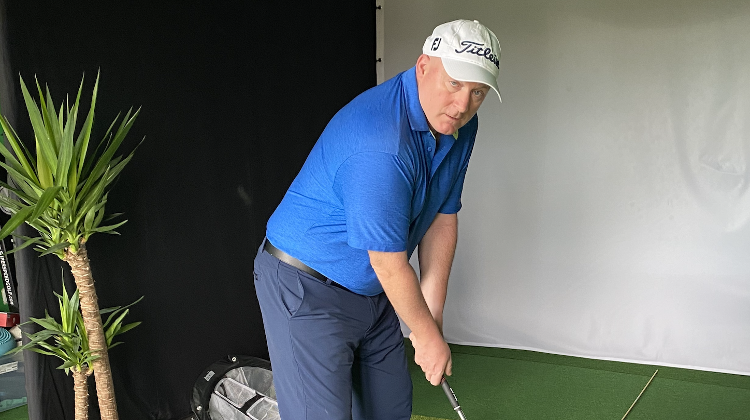 Gearóid has been living in Hungary off-and-on for over 20 years. Since Gearóid first landed in Hungary in the mid-90s, he has had a fruitful professional career in the Real Estate and Language Teaching sectors, respectively.

Being an avid sportsperson and proud Irishman, he co-founded an expat football club that he played for and managed for several years, and was also involved in establishing and being secretary of Budapest’s first Gaelic Football club, and as an Officer for the Gaelic Athletic Games (GAA) European County Board.

After teaching in England, Germany, Hungary and Ireland, Gearóid decided to establish an indoor golf studio (The Golf Studio) in the heart of the city centre in Budapest at the end of 2020.

He offers first class golf coaching service to all levels of golfers (novice to elite, male /female and juniors) with a Flightscope launch monitor, Boditrak pressure mat and a plethora of golf training aids to quickly improve a player’s performance.

Gearóid also offers coaching at golf ranges (Continental GC & Highland GC) in Budapest, however he stresses that learning indoors, particularly one-to-one is extremely effective and fun with his state-of-the-art golf simulator (no distractions or embarrassing stares for hitting wayward shots). Gearóid also stresses that he can make it more cost effective for his clients by coaching indoors.

Gearoid is willing to give 10 free 20-minute lessons to Xpatloop readers that quote “Xpatloop golf” to him.


1. When did you arrive in Hungary and what brought you here?

I first arrived in 1996 whilst I was backpacking around Continental Europe with some university friends. Thankfully, I was smitten by Budapest and decided to stay after meeting an alluring Hungarian woman on a bus to Turkey. We hung out together for 3 weeks and I decided to remain in Hungary for the following 4 years till I went back to Ireland to study.

No, was my first taste of living abroad.

How different it was from my own country, yet it had this unique ambience and rawness that I had never experienced before elsewhere. The standard of living was also extremely low compared to the West at the time, so this was also a great attraction.

Take them to the usual touristic landmarks in the city e.g., Buda castle, Parliament, take a cruise on the Danube as it has some amazing sights to behold.

In the past I loved Halászlé (Fisherman’s soup). It does have a kick to it with traditional paprika powder. Have always found it filling!

I must have a particular brand of French yoghurt and Irish butter.

Cipőfűző was one of the first words I learnt in Hungarian. It has got a lovely ring to it!

8. What do you miss the most from home?

I miss the Irish countryside, particularly the West Cork shoreline.

When I was a teenager, I wanted to be the next Paul McGrath or Bryan Robson and play for Manchester United and the Republic of Ireland. Unfortunately, it never panned out for me, but I continued to play footie till father time stepped in to tell me to stop punishing myself.

I would hate to be a well-known celebrity/public figure. All that attention, and having to live life in a goldfish bowel which has never appealed to me.

Had a great time in Trieste in 2020 before Covid hit to make all our lives a living hell. I have always enjoyed visiting this city and was very tempted to settle down there when an opportunity arose but decided to remain in Budapest.

12. Where do you hope to spend your next one?

I miss Ireland so much, so I badly need to go back home soon once things have gotten back to normality again.

13. What was your favourite band, film, or hobby as a teen?

Guns and Roses was my favourite band. Luckily, I was able to see them play live in their prime and I actually met Slash and Duff McKagan in person in Budapest. Duff told me he was Irish-American and his ancestors were ‘Harringtons’ from a town in West Cork. As a coincidence mine are Harringtons as well! J A famous Irish golfer, Padraig Harrington’s father, is also from the same town as my late father, Castletownbere in the Beara Peninsula.

14. Apart of temptation what can't you resist?

I have always loved chocolate! My biggest vice!

Not a big connoisseur of wine, but red wine is my preferred tipple. When I first came to Hungary, I used to love drinking Bull’s Blood of Eger (Egri Bikavér). I was absolutely enamoured by the famed story of Dobó István, who somehow managed to keep the Turks at bay in the famous siege of Eger in 1552. The Turks believed the defenders were demons when they mistakenly took wine as blood on the faces of the local defenders.

I enjoy both, but a good book will always outshine a film.

Night person…have always been someone to burn the midnight oil. I have never taken to early starts but I put this down to too many late nights back in my younger years.

Homelessness….it saddens me to see too many unfortunates on our streets in 2021. We need to be more outspoken about this issue and lobby the powers that be, so these people can get out of the trap they currently find themselves in. I spoke to a homeless person once in English and his story was harrowing. I have tried to assist, but there appears to be a dogma in society that it is not our responsibility to assist such people. We all need to do more to help!

I have always lived in Pest. Buda attracts me but I guess the real estate prices were out of my reach in the past and the commuting distance didn’t appeal to me. I live in VII and it has its moments. One gripe I have is the fact that there isn’t any residential parking in my neighborhood in VII district which perplexes me and I am sure many more residents.