Xpat Interview: H.E. Park Chul-min, Ambassador of the Republic of Korea to Hungary 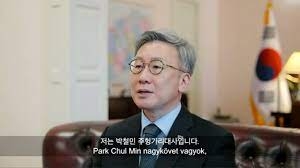 Your Excellency, did You have any contact with Hungary before being posted here as Ambassador?

I visited Hungary for the first time in 1999, coming from The Hague where I was posted, with my family, elementary school daughter and son who are grown-ups already. It was just for two days, touring also in the neighbouring countries, travelling altogether 6000 km.

The second time I was here with an official visit, with the delegation of our then Prime Minister in 2014. At that time, I was responsible for organising the visit, implementing the PM’s schedule, so I know how good Hungary is. Then I was assigned as Ambassador to Hungary for 3 years, I arrived here in December 2020. It is a great opportunity for me.

How was Your first year regarding Your diplomatic activity amid COVID-19 pandemic?

I have had a very active year. As the COVID situation is getting better, I move a bit widely by visiting the Korean companies here, particularly manufacturing plants including Hanon Systems, Samsung SDI, SK Innovation, Samsung Electronics, Hankook Tire, KDB Bank, LG Electronics, Lotte, Doosan and others. Regarding the political aspect of my activity I have already met ten ministers from the Hungarian government.

From October I intend to encounter the remaining four Hungarian ministers as well. I met Prime Minister Viktor Orbán in very special circumstances: in the Puskás Arena at the UEFA football match between Hungary and Portugal, where I was invited by the Chairman of the Portuguese Football Federation.

I saw the Portuguese President there as a guest, whom I know very well from my previous posting in Lisbon, so he introduced me to PM Orbán. I can say that the first period of my term here was very useful, fruitful and quite dense! My schedule is quite long, the priority is to visit the large Hungarian cities and those, where there is a Korean company or university where Korean students study.

This is my policy in my work. I would like to go to every corner in this beautiful country.

What is Your assessment on the multifaceted bilateral relations between our countries?

In 1989, Hungary was the first Eastern European country to establish diplomatic relations with the Republic of Korea. The bilateral relations have progressed significantly in the political, economic, cultural, educational fields over these more than three decades and have never been as excellent in various areas as they are today.

In terms of economic cooperation, the greatest development is that in 2019, the Republic of Korea overtook Germany as the top country of foreign direct investments of that year in Hungary.

How do You explain this very strong Korean presence in the Hungarian economy? Where do You see the potential to enhance this extraordinary cooperation between our countries?

Hungary is a business-friendly country, the investment incentives and subsides policy of the Hungarian government attracts foreign investors. Korea continues to foster its strong presence in Hungary and is now looking for a new investment area such as medical and pharmaceutical fields. The frontrunners are Samyang Biopharm and Celltrion.

What are Your goals and priorities as Ambassador?

My primary goal is to further improve our bilateral relations in all sectors, which is not an easy but pursuable task as we have exceptional cooperation based on solid pillars. At this time over 700 Korean students attend Hungarian universities, mostly medical faculties in Budapest, Debrecen, Pécs and Szeged. The Korean community has also increased in Hungary to 4500 people, 5 years ago it was less than 1500.

Almost 20 years ago, the President of my homeland took part at a Summit Meeting here. Now I consider my first and foremost diplomatic task to organise a visit of the President of South Korea to Hungary during my term and to cover the visits of other high-ranking officials. My second goal is to achieve economic growth and larger trade.

The economic cooperation is fantastic between our countries. Today there are 270 Korean companies here, 5 years ago it was 130. There is always room for development. My third objective in cultural diplomacy, which became a very important tool to develop understanding of the nations’ ideals and culture. In essence, cultural diplomacy reveals the soul of a nation, which in turn creates influence, so its role is growing in global extend.

Next year we have the 10th anniversary of opening the Korean Cultural Centre in Budapest. In 2019 a new, very modern building of KCC was inaugurated, the largest in Europe. We have many plans and goals for this year and for the jubilee year.

Our National Ballet will come to Budapest in 2022, and we are about to finalise the contract with the Hungarian State Opera, which will reopen next year. Our national orchestra and a choir will also give a concert at the Franz Liszt Academy of Music.

We have a great facility with a brilliant new director in charge of cultural cooperation, working in the Korean spirit of heung feelings (means joy, fun, entertainment), regarded as an inspiration of creativity, openness, and adaptability.

I would like to mention an important bond between Korea and Hungary, the great Korean composer, Ahn Eak-tai (1906 –1965), who composed our national anthem, was a student of Zoltán Kodály between 1938-41 at Liszt Ferenc Music Academy. His statue was unveiled in 2012 in the City Park.

What are the key challenges facing South Korea as one of the most successful countries on our planet?

The main reason of the worsening of COVID data is the slow delivery of vaccines, which are already secured to cover the entire Korean population twice by the end of the year. In Hungary, vaccination started in December 2020, and in our case two months later.

We are at full capacity to address over 1 million vaccines a day. Our final goal is to reach herd immunity by the end of October 2021. We have medical pharmaceutical companies that have already signed contracts with Moderna and AstraZeneca to produce their vaccines, and maybe at the end of this year it can be realised. Furthermore, we also developed our own vaccines that can probably be used next year.

The present pandemic situation is a big challenge for us regardless of country and race. The peaceful reunification of the Korean Peninsula is a major strategic goal and challenge of the Republic of Korea. Our absolute objective is to sit down at the negotiating table with North Korea and get them to give up its nuclear weapons unambiguously and completely.

Demographic problem is another huge challenge for South Korea. We face unprecedented demographic changes. South Korea’s total fertility rate in 2020 was 0.84 births per woman – the lowest figure in the world. The rapidly aging and sharply declining population could have a negative effect on our global economic and technological competitiveness.

How do You celebrate this year the Foundation Day, observed on October 3, related to the origins of the Korean nation, established by the legendary Dangun in 2333 BC?

This is one of our four great national holidays, we call it Foundation Day. The other holiday is the Independence Movement Day on March 1, dating back to 1919, when all of Korea was under the rule of Japan from 1910 to 1945. Another holiday is the Liberation Day on August 15, that marks the liberation of Korea from 35-year Japanese rule in 1945 after the end of WWII.

Hangul Day is another one on October 9 to celebrate the proclamation of Hangul, the Korean alphabet. This year the National Day celebration was cancelled due to the pandemic and instead I am thinking of organising a small gathering with friends and dignitaries for the celebration of the year near the Christmas season.

Your Excellency, tell us please about Your professional-diplomatic career.

When I studied in high school, someone told me how nice a diplomat’s life is. So I attended the Seoul National University, the faculty of international relations to become a diplomat. I joined the Ministry of Foreign Affairs early in 1989.

My first European post was in The Hague, where I dealt with international disarmament issues. This was followed by a number of other diplomatic missions, including in Moscow and New York. I enjoyed my ambassadorship in Lisbon, as much as in Hungary.

When I was director general of European affairs in the Ministry of Foreign Affairs, I had the chance to organise a unique and very challenging project: Eurasia Express train has run from Vladivostok through the whole Trans-Siberian rail to its final destination Berlin, with around 300 guests including politicians, artists and students travelling together on this very special journey. I’m very proud that it was a great success.

Needless to say, it was a great pleasure and honour to serve my president in my capacity as secretary of foreign policy over 20 months before assigned here as ambassador to Hungary.

How do You spend Your leisure time after the busy working days?

When I have the opportunity to go to other countries, I always visit museums, I like watching the architecture in other cities. Previously I listened to old pop music, nowadays I prefer classical music: Liszt, Mozart, Beethoven, Bartók, Kodály, Tchaikovsky, Rachmaninoff and Prokofiev, I like all the music from great composers.

Now, Sheherezade by Rimsky-Korsakov is my favourite. I read a lot about Hungarian history, and the history of Habsburgs, who shaped the history of Central Europe a lot, where I have an enormous pleasure to serve the the Republic of Korea.


By Anna Popper - Republished with permission of ’Diplomatic Magazine'