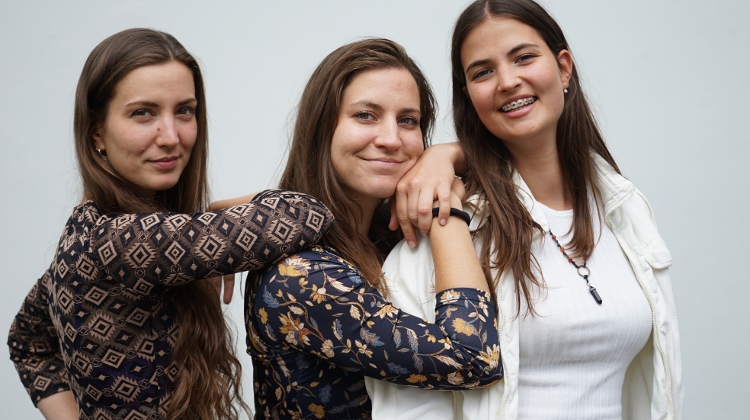 Luca - pictured in the middle - attended a maths high school, and in the meantime, she was also working in a restaurant as a commis. She was really interested in gastronomy from the very beginning.

Later she had to choose a University, so she went to Budapest Corvinus University to learn Vinology and Oenology. At the same time, she was attending a night school to be trained as a chef.

She finished her studies in 2016. Afterwards, she worked at many restaurants and received some unique opportunities such as being a chef on the prestigious CIIE in Shanghai, and at various wine tasting dinners at Homonna Winery and Lenkey Winery.

Throughout the years, she served different dishes in several amazing ceramics made by famous Hungarian ceramic artists. One day she met her friend on the highway and told her she wanted to try pottery for some years, and as it turned out her mother had a studio where she could finaly try it.

Luca started making ceramics for the first time in 2017, while she was still working at a restaurant, as a pastry chef. Later, she moved to Geiranger, Norway for a job, but soon after she came back to Hungary because she got offered a place at Moholy-Nagy University of Art and Design Budapest (MOME) in 2019.

During her studies, she was involved in some inspiring projects related to gastronomy which resulted in her creating a porcelain salt-shaker and egg plate in her signature style. In 2021 her Lichi bowl and Jackfruit bowl was chosen for the Hungarian Ceramics Biennial.

Luca thinks one of her biggest achievements is that she made plates for Ensō Izakaya Budapest. Currently, she is working at a shared studio in Budapest, and creating ceramics.

My family, friends, the language, and the Hungarian cuisine.

They must visit my farmers market, Czakó Farmers Market. I would show them some craft brewery, and the best restaurants. I would show the Kiscelli museum and go to the sauna on the side of the Danube.

I love cheese. When I was a kid I was keen on Hortobágyi húsos palacsinta (Meet pancake Hortobágyi style). Now I really like deep-fried oysters with aioli and pistachio ice cream.

I often do stretching, yoga, but also like skiing and scuba diving.

The Sebes-Körös river. There is a place where the river goes really fast and you can have a shower at the dam.

9. What's a job you would definitely never want?

Dishwashing in a hotel.

In the countryside, in Kerecseny in a cabin that we rented with my friends. Before that, I spent my new year in Trysil with my Czech friend.

In Japan, I hope. But I also look forward to going to London and visiting my sister at her graduation ceremony at the Royal College of Art.

My favourite film was The Green Butchers. My favourite band was Greenday, Blink182 and Earth, Wind and Fire. I used to do macramé.

Good food, or something exciting.

In wintertime mostly red, in the summertime I prefer white, but always dry!

People wasting food. Also the tons of packaging on delivery stuff is hard to see for me.

Buda. I lived on the Pest side as well, which I really liked, but now I appreciate the green area, the hills, and the forest more than the city centre and pubs.

I always listened to my intuitions, and I never regretted it. I suggest to everyone; never choose a path just for money and do not let anyone make you impressionable. Your body and soul know what you need.

Interview text translated by Szilvia Molnár, a professional freelance writer, travel expert, mom of two, and admitted coffee addict. Though not necessarily in that order. Connect with her on LinkedIn or read about her latest travel experiences on the Exploration Lounge website.