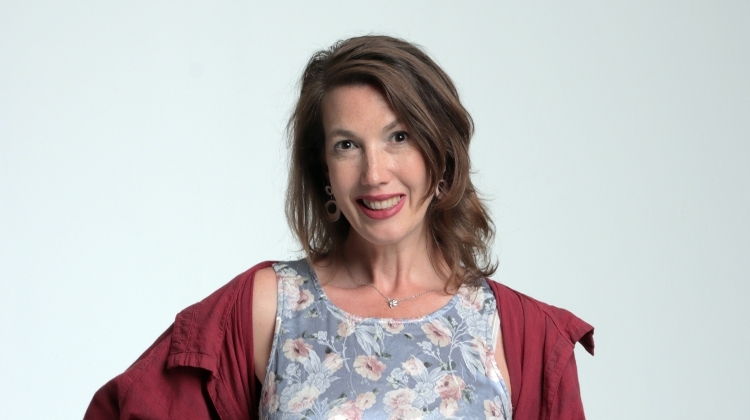 Esther Holbrook was born in Carmel, California, USA on 5 October 1975. She was raised in Ashland, Oregon and moved to Budapest, Hungary in 1998, where she has lived ever since.

A program coordinator at Central European University’s Center for Religious Studies, she is also on occasion a writer, actress, and voice artist.

She performs as part of the Provocative Giraffe Comedy Show and Literary Event in Budapest and this January 2022, she and her friend Patrick Mullowney have launched the Cipher Theatre Company, which puts on public staged readings of English language playscripts in Budapest.

A long-standing Pester and happily single, she resides in Újlipótváros with her recently adopted pandemic puppy, Cifra.


1. When did you arrive in Hungary and what brought you here?

At my university back in my hometown, I was a member of the international student’s association and the only one without a passport.  I got some strong hints from the other members that I better go abroad after I graduate. Some of my best friends at uni were Hungarian, I had a pen pal from Kiskőrös, represented Hungary at Model United Nations in college, and was deeply interested in learning more about minority rights in Europe and the representation of European Roma in political systems there. So, when I put my finger on the map, it wasn’t a surprise to me where it landed.

Although Berlin and Istanbul have both been places that I could really see myself living, I never found another place I’d rather be than Budapest. It’s a small village in a big city and I really love taking a random walk downtown and running into good friends or acquaintances quite serendipitously. I also very grateful for how accessible the cultural life is to everyone here, and how welcomed I feel to be a part it.

Honestly, I thought the food would be spicier, but that is OK because the discovery of Pálinka thoroughly compensated. Another thing: at the time I arrived, there weren’t a lot of retail chain clothing shops around and if you wanted to buy a bra, for instance, and try it on before you bought it, you had to ask the attendant in the shop to retrieve it for you and, ahem, assist you with the fitting. Americans have a lot of body issues, so, I didn’t buy a lot of lingerie in the beginning. Luckily, Westend Shopping Center showed up a couple years later (thank heavens).

The Castle District, Fisherman’s Bastion, Heroes Square, Szabadság tér (but only with a mini tour), one of the bathhouses (which one depends on their personality), the Gül Baba Türbe (the new museum there is nice), Kazinczy utca (“Bar Street”) and Szimpla Kert.  If they have time for a day trip, I would recommend Szentendre or Eger, if they have longer than that I would suggest Sopron, Hortobágy, Szeged, or Pécs. Hungary is a breath-taking country with beautiful cities, there is a little of something for everyone.

Even before I decided to become a vegetarian a couple years ago, my favourite Hungarian dishes were predominantly non-meat ones: lecsó and főzelék (for instance, spinach, yellow pea, and squash varieties) are my absolute favourites.

Sadly, there is always something missing from my refrigerator.

A favourite phrase of mine is ‘ne haragudj’ (don’t be offended): once articulated, it is guaranteed the recipient is already offended. I also really like tessék because it’s a versatile, inviting, and fun word.

I would love to be a therapist, as my friends know all too well.

Roadwork seems pretty awful, but so does anything involving finance or human resources, which all seem like necessary but hard and thankless tasks. To all my colleagues in these divisions, I hope they know that they have my deepest respect.

My last vacation was a sun-filled, seaside summer week with dear friends on the island of Murter, Croatia, just before the border closed for another lockdown in September 2020. I think 20% of the Hungarian population was down there with us at the time. Now, we are all back in the city dreaming of the day we’ll return there in our flipflops and sunhats.

Wherever I go, I want to take my pandemic puppy, Cifra, with me. I adopted him from a Szigetszentmiklós dog shelter in January 2021 and he’s been a stellar companion ever since. We go jogging and on walks and hikes together but also frequent bars, restaurants, parties, and even cultural and literary events together. Basically, being with Cifra is a holiday. To anyone considering, I highly recommend adopting a full-grown dog as they are potty-trained, don’t chew things, and their personality is set.

Cigarettes. I’ve managed to quit smoking regularly, but on a night out I’ll beg one off a friend and come out looking more pitiful than Cifra at the dinner table. I also can’t resist a bit of wit, even if the consequence of a snotty comment is regrettable. If it gets a laugh, I consider it all worthwhile. Both bad habits, I know.

I had quite an isolated childhood. So, I ended up with a preference for foreign films like Pathfinder (a Finnish film from 1987) and never really got into music. My first visit to a disco was in university. The Indian restaurant in Ashland, Five Rivers, turned into a night club after 10 pm and I went there with my Hungarian classmates who taught me how to ‘dance’. I owe a great deal to my Hungarian friends!

Red wine all the way. Nothing beats a good Cabernet Franc.

I am a night owl or, to be more precise, an Estikecske (my writer’s pseudonym).

I have lived in over 15 different apartments in Budapest, moving around for socio-economic reasons mostly, and yet I have always lived in Pest. It’s like I have an internal magnet that keeps me in District 13, a neighbourhood I completely adore for Pozsonyi utca, the Lehel Market, and Margitsziget, among other local treasures.

It doesn’t get easier, but it does get better.