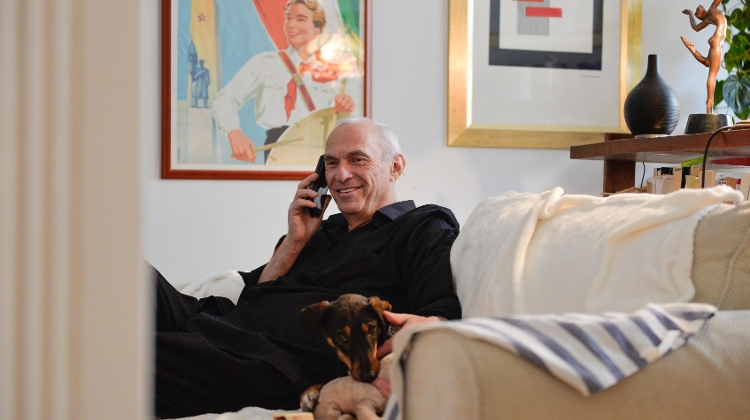 Born in Budapest, Robert Kramer left Hungary as a small child in the wake of the 1956 Hungarian Revolution. In 1975, he moved to Washington, DC from New York City, and worked in increasingly senior positions in the US Government for over 25 years.

In the late 1990s, Robert was for two years on the staff of Vice President Al Gore, helping Gore design leadership development programs for senior executives in the US government. Robert returned to Budapest in 2015 to become the Inaugural Chair of Leadership at a Budapest university. He stepped down from his Chair in 2016 and switched careers to go into the practice of psychoanalysis.

Author of three books on psychotherapy, he now teaches psychoanalysis at ELTE and is a practicing Rankian therapist. Otto Rank was Freud's closest associate in Vienna for two decades. Rank broke with Freud over the master's misogyny and ineffective therapeutic practices.  Rank invented "relationship therapy," now the dominant form of therapy worldwide.

1. What do you do professionally?

I am Professor of Psychoanalysis at Eötvös Loránd University in Budapest, teaching courses to MA and doctoral students on existential and humanistic psychology, and a practicing psychotherapist.

2. As a psychoanalyst, what is it exactly that you do?

I listen deeply to clients struggling with issues like low self-esteem, anxiety, depression, loneliness and relationship problems. They come to me because they may already have tried cognitive-behavioral therapy, but found it too superficial.

I go deeper to the underlying unconscious feelings and desires that are roiling around in their unconscious. CBT, while very effective for some issues, does not touch the unconscious. Most clients come to to me because their relationships are not working or have failed.

3. What are you listening for?

I listen with my "third ear" -- my own unconscious --  to the unconscious of my clients. I am listening for the music underneath the words.  I listen to clues emanating from their unconscious and help them try to make sense of their conflicting desires, thoughts and feelings.

For example, many women say consciously that they want a happy relationship with just one man, but somehow manage to sabotage every single one by having affairs or choosing unsuitable partners. This is called the "repetition compulsion" and can be helped with psychoanalysis.

4. How do you help clients with relationship problems?

I practice what is called "relationship therapy."  I listen with total attention and respect to what they say, and help them find the words to describe their conflicts, many of which go back to their original relationship to their fathers, which may have been very unsatisfactory.

I published a book about how I do this. It's called The Birth of Relationship Therapy, and it came out this year. All told, I have published three books on psychoanalysis and am now working on a fourth one, which will appear with Oxford University Press in 2023.

5. Do you give public lectures on psychoanalysis as well as conduct psychotherapy?

Yes, I lecture at the American Psychological Association; the International Psychoanalytic Association; the Freud Museum in Vienna; the University of Athens Medical School in Greece; Bar Ilan University in Tel Aviv; the International Institute of Existential and Humanistic Psychology in Beijing; the William Alanson White Institute in New York; the Indiana Society for Psychoanalytic Thought in Indianapolis; the Existential-Humanistic Institute in San Francisco; and the University of Pennsylvania School of Social Work in Philadelphia.

6. That's impressive! But do you do any popular writing in addition to your professional books and lectures?

Yes, I have published popular articles on psychoanalysis in The Los Angeles Review of Books, The Times of Israel (Tel Aviv), and The New European (London). I am happy to share these articles with anyone who wants to read them. Just send me an email at robertkramer@gwu.edu and I will send them to you.

I swim three times a week at the Rudas Baths, which, in my opinion, is the best bath in Budapest.  And I read at least two books a week, not only on psychology, but also on art, culture, religion, spirituality, history and politics.

When I have the time, I work on my half-completed movie screenplay about how Freud actually practiced therapy. People are shocked when I tell them that Freud was an awful therapist, and did not like doing therapy, He wrote five famous case histories, claiming success in each case, but they were all disasters. I am hoping to sell my screenplay to Netflix and make a 5-part series.

The moon shining above the Danube on a clear night, the Szababsag Bridge lighting up in a spectacular green color, and makos (poppy seed) cakes.

10. What did you do before you moved to Budapest?

As a psychoanalyst, I consulted on leader development to corporate, government and civil society organizations around the world. My clients included Pfizer Corporation; Boeing Corporation; the World Bank; the European Commission in Brussels and Luxembourg; the European Environmental Agency in Copenhagen; the Prime Minister’s Office in Tallinn, Estonia; the National Research University’s Higher School of Economics in Moscow and St. Petersburg; the Moscow State University of Pedagogy; the University of Haifa; the Philippine Academy of Development; almost all agencies of the US Government, including the intelligence community; and the Department of Human Services in the City of Alexandria in the US.