Hungary Is 3rd Most Competitive Country In Eastern Europe's IT Industry 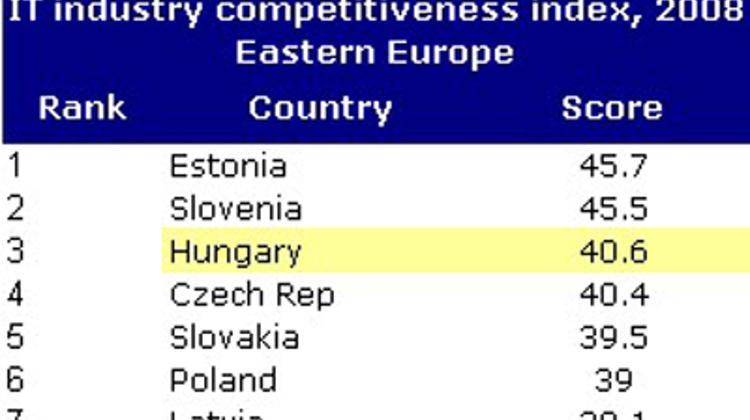 "Technology spending may be softening in many parts of the world as the credit crunch bites, but the longer term fundamentals of IT industry competitiveness remain constant.

An innovation-friendly culture, a steady flow of talent, advanced technology infrastructure, a robust legal regime, well-balanced government support and an open business environment are all vital factors that enable a country's IT producers to thrive.

These form the basis of the Economist Intelligence Unit's "IT industry competitiveness index", in which the United States ranks as first in the world in 2008, maintaining its top position from the previous year. Hungary came in 28th, unchanged from the rank it achieved in 2007, but its score was still high enough to snatch the bronze medal in the Eastern European “race".

As an incubator of high-tech start-ups and technology innovation and as a developer of talent, the US remains second to none. “However, there is no room for complacency, as three new countries -Taiwan, Sweden and Denmark - move into the top five this year, displacing others such as Japan and South Korea. IT industry environments elsewhere in Europe and Asia, including in emerging markets, are also becoming more competitive," the EIU said on Tuesday.

Following are the major conclusions of EIU's research, and the key implications of the index for governments and IT industry leaders:

*Investing in people is mission-critical. Sourcing talent will be among the toughest challenges IT producers will face in the coming years. The US, Singapore and UK provide the best environments for human-capital development among the index countries. The brain drain of IT talent from emerging markets shows signs of slowing or reversing, however, and the US and other leaders will need to work hard to remain magnets for the world's IT talent.

*East Asia boasts the strongest R&D environments. Dynamic innovation, supported by a strong R&D environment, is a major contributor to IT industry competitiveness. Taiwan, South Korea and Japan remain the index leaders when it comes to the R&D environment for technology production. All are prolific generators of technology patents, and its firms and governments are heavy R&D spenders.

*Globalisation and the Internet will “liberate" R&D. Ecosystems similar to America's Silicon Valley—bringing together talent, technology, venture capital and good universities, supported by a risk-taking ethos—will remain the best incubators of IT innovation. Internet-driven collaboration will partly level the playing field, however, facilitating companies' access to skilled IT innovators and researchers wherever they are located.

*Competitive broadband markets help cultivate strong IT sectors. Without fast, reliable and secure Internet access, technology firms cannot interact effectively with partners nor can they sell their services online. IT industries in the index top tier all derive substantial benefit from the high-quality networks developed through competition, but more telecoms liberalisation is needed in less developed regions to spur infrastructure development.

*Legal regimes are slowly improving. The US, Australia and west European countries retain the world's most effective systems of intellectual property (IP) protection and the most developed bodies of e-commerce and cybercrime law. But progress in bolstering legal regimes is also being made in tough places such as China, which in recent years has updated its IP and e-commerce legislation and improved enforcement.

*Governments must let market forces operate. To support the development of local IT production, policymakers' best efforts are aimed at improving education, skills development, and the financing and legal environments. E-government development and a proactive broadband strategy also help, as can calibrated support for innovation. Trouble often comes, however, when governments try to champion specific companies or technologies.

"Few countries can hope to build strong IT production sectors without strong business and legal environments, deep pools of talent, support for innovation, and the widespread use of technology throughout society," he added.

“This year's index shows that a country's IT competitiveness rankings can move upward or downward very quickly," saaid Robert Holleyman, president and CEO of BSA.

“The ability of information technology to deliver jobs and a better quality of life is strongly affected by the six drivers of competitiveness. This report should serve as a guide for governments on advancing innovation and economic performance."

The IT industry competitiveness index is organised into six distinct categories of quantitative and qualitative indicators, numbering 25 in all. The category and indicator weights were formulated by the Economist Intelligence Unit's modelling team using, as a guide, individual correlation coefficients of each indicator against a measure of IT labour productivity. The result is an overall index score and category scores for each country.

Hungary was in the Top20 in no other but the Human Capital category.

The scoring methodology remains unchanged from last year, with one important exception. Country scores in the indicator covering patents, which are assessed in the R&D environment category, are now based on an estimation of IT-related patent registrations rather than using figures covering the entire economy, as was the case in 2007. This is a heavily weighted indicator in the model, and the change has resulted in some movement in ranks in both the R&D environment category as well as the overall index."