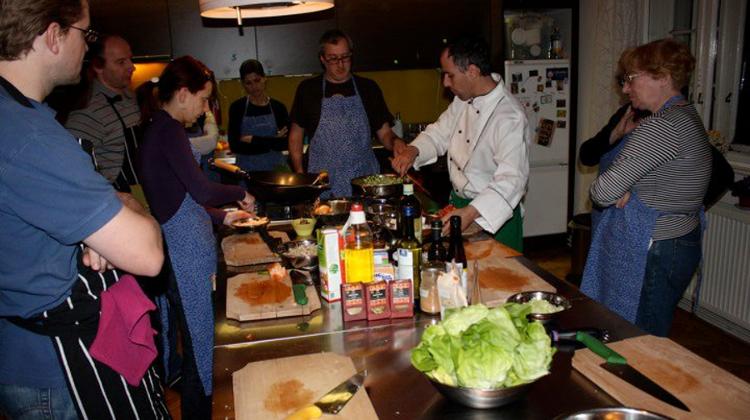 "Treehugger Dan’s has just begun cooperation with Budapest’s hottest cooking school, supplying Makifood with organic Fair Trade spices for their classes. I have never been to a cooking class, and the Elle Power Women Salon recommended that I try taking cooking classes to meet single women of my age, so I thought I would check it out.

I first started cooking for myself because of my mother. Although my father was the better cook, he rarely did so. The last time my mother cooked for us, it was hamburgers. Now, it is really, really hard to fuck up a hamburger. But, somehow she managed. They were so bad that my father, brother and I refused to eat them. My mother then screamed, “ok, then I’ll feed it to the dogs!” She did so, and the dogs proceeded to vomit all over the house. Then I had to learn to cook for myself – one of the best things that ever happened to me, because I take great pleasure in cooking and baking. Since then, I have been king of my own kitchen. Therefore, the most difficult thing for me to first come to grips with was letting go. One has to learn to be lead, like dancing.

I was one of the first to arrive, because I had brought the Fair Trade organic pepper, cardamom, whole chilis, vanilla beans, …I also brought my own slippers, which got some laughs and marked me as an someone who has acclimated to Hungarian customs (read: bee here too long). Maki, I was pleased to see, already uses mostly organic products. There were about 8-9 of us for this class. I was surprised to find that I was the only foreigner, since my preconception was that the school mostly catered to expats. While they are happy to teach in English as well, this night was in Hungarian. There were a couple older women, but the rest of the class was in their late twenties, early-thirties, three men and the rest women. Maki is expecting a baby, so while she was present, Balazs was the guest chef - his first time at Makifood.

Upon arrival, everyone received the recipes, and a small magnetic clothespin to fix them to the metal work table while cooking, slippers, an apron, and a dish clothe. The class started off with about 30 minutes of information. Looking around, I think everyone was ready to start chopping and dicing from the get-go, and a bit anxious to begin, but the information was relevant to the class. Balazs is both a doctor and a chef, and specializes in Chinese medicine and medicinal herbs, as well has cooking as a means of curing, or at least stabilizing illness. Balazs informed us briefly about the philosophy behind this style of cooking. In addition, he said that we would learn some techniques for cutting, mixing textures, and how to move most efficiently in the kitchen. A tall pitcher of lemony water was on the table, and people put different colored rubber bands on the glasses to mark theirs and save unnecessary washing.

So, I had to let go from the start. Anyone who likes to cook has their own methods of doing things. I prefer smaller knives with good weight for cutting everything. I never use a big knife. My favorite knife is one I bought in Tokyo (when I went to Kyoto in 1997 by train to lobby at the Climate Change Convention) at a shop that for hundreds of years has made samurai swords. However, everyone got big-ass knives. Maybe I just need to learn to use big knives better.

Eight stations were set up with cutting boards and knives on non-slip mats, and we proceeded to chop. Simultaneously, Balazs explained that the Chinese will fast-cook in the spring and summer, and slow cook in the winter and fall because those seasonal vegetables need longer to release the good stuff into the food. For the pastry we cooked the zucchini first in only lukewarm oil. Zucchini does not absorb oil, so we let the oil heat up around it. When you shake the pan and the zucchini moves freely in the pan, the oil is hot enough to add other ingredients. This class also happened to be not just vegetarian, but vegan as well. I once cooked a big pot of pumpkin soup at a conference and added too much chili. It was indelibly hot. Knowing I could not use milk or cream to cool it down, I used honey, not thinking of honey as an animal product. I ruined the meal for the vegans. But one just has to learn some of the tricks and it is not so hard. For example, for the pastry we used a combination of oil and soya milk in place of egg white to baste the inside and outside of the pastry, and used mashed beans as a thickener instead of egg or other animal products. I am not going to go into full details about what and how we cooked it, but I just want to mention a few other things I learned.

“Glass” noodles are made from mungo beans or tapioca. Two-handled woks are the southern Chinese style, while the combo short and long handled woks one finds at IKEA are used in Northern China. The vegetable pastry was cooked on a “silipad,” a re-usable rubber-like pad used instead baking paper. Maki says you can even get muffin pans made out of the stuff so you do not need throw-away muffin papers.

We did not eat until around 8:30, so I highly recommend that you have a snack before coming. There was a lot of not-so-inconspicuous nibbling going on. The pastry was the appetizer, but it was scrumptious, and I could happily eaten it as the main course. The soup, for my taste, was too carroty, and could have used some potato or spices to liven it up since the leaks did not come through.

The noodles were very good, as was the salad, and the fruit-brown rice parfait topped it all off. All in all, it was a very interesting and worth-while way to spend an evening. You can sign up for Makifood classes on-line, and pay for the classes at Treehugger Dan’s on Suto u. 2. Anyone attending a Makifood class also gets a 10% coupon usable for Fair Trade products at any of the 3 Treehugger Dan locations."