No Need To Panic! - Fund Managers On Hungary's Forint 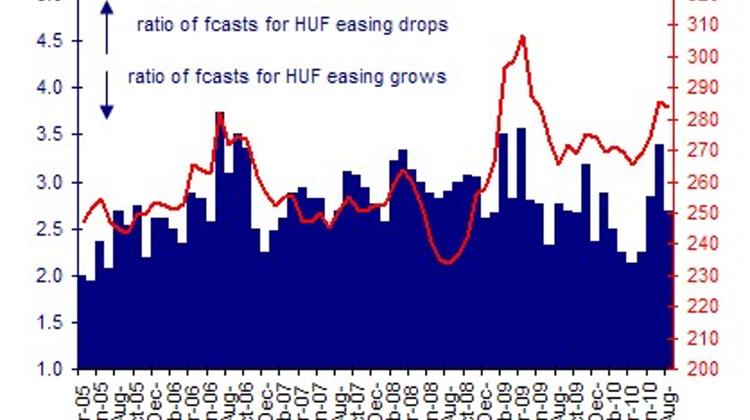 "A sweeping majority of fund managers polled by Portfolio.hu in its latest monthly survey project the forint to be closet to 283.70 versus the euro three months from now. The respondents, however, turned out to have grimmer views for the longer term (12 months) than a month ago, with 37% of projecting a 2% plus HUF depreciation.

The fund managers have higher hopes about the fixed-income market and the ratio of those in underweight position on Hungarian bonds relative to their own benchmark has dropped.

While the breakdown of talks with the International Monetary Fund and the lender’s early departure from consultations sent the forint to 290 against the euro, the jitters have passed by the end of the month and the HUF showed an 0.6% firming m/m. After all that, the majority of the fund managers in the survey (56%) are largely of the same view about the forint’s 3-m outlook than in July. They project EUR/HUF to be +/-5% from the 283.70 benchmark three months from now.

The respondents, however, grew more pessimistic about the 12-m outlook. According to the indicator comprising all the estimates, the ratio of those expecting HUF easing has grown, although we need to note that the cheerful mood in the last poll seemed exaggerated. Now 38% of those polled believe the HUF will be weaker by 2% or more than the benchmark a year from now.

Regarding the outlook on government securities, the fund managers have turned more upbeat both for the short- and the long terms. 81% of the respondents believe the MAX index will stand +/-2% away from the 423-point benchmark three months from now, but 13% of them project a 2-5% rise (i.e. a drop in yields).

On a 12-m horizon most of the fund managers continue to see lower yields, but with respect to the extent of the decline there was a minor change from a month ago. According to the index conceived of the estimates, an increasing number of the respondents have been projecting over the past few months a rise in the MAX index (as yields have been edging higher).

While the fund managers have become more optimistic about the prospects of the government securities market, the ratio of those underweighting HGBs vs. their own benchmark has dropped, while most of the respondents (60%) keep local assets on market weight."