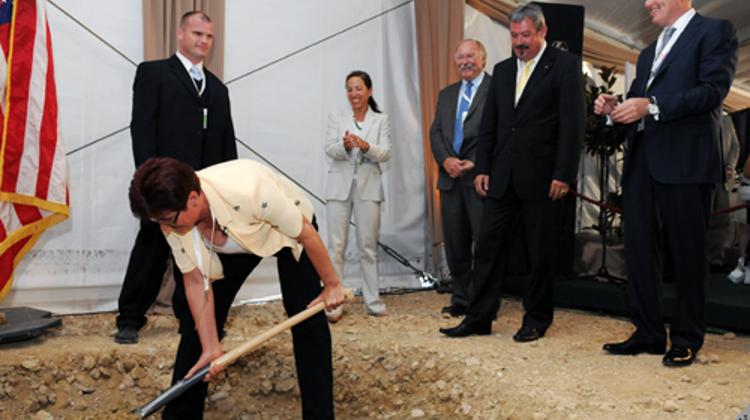 "Pannonia Ethanol Zrt. has broken ground on Hungary's largest and most environmentally friendly bio-ethanol production facility in Dunaföldvár. The plant is scheduled to begin production in 2011 and will produce 240 million liters of bio-ethanol a year. It will use 575,000 metric tons of corn annually, contributing to a more stable and long term market for Hungarian corn which will help increase rural incomes.

The plant will also produce 175,000 metric tons of high protein animal feed that will be available to local farmers.

In addition to the seventy-seven direct jobs being created, the project will indirectly support 250 jobs during the construction phase and over 600 once the plant is operational. The facility will use state of the art technology and produce some of the cleanest and most sustainable ethanol in Europe as measured by Greenhouse Gas reduction. The project will advance the EU’s goal for energy independence in the transportation sector.

The U.S. company involved in the project, Fagen Inc., is the largest builder of ethanol plants in the United States and is noted for its use of cutting-edge technology, reliability, efficiency and safety.

Ambassador Kounalakis noted: “What you see here today is a manifestation of President Obama’s vision. It is the public and private sector working together to make a better, safer, cleaner world for our children and grandchildren.”