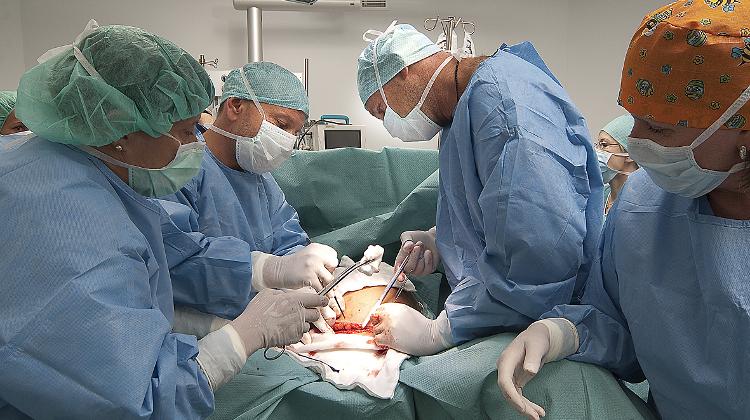 "The fifth generation prosthesis implantation operation was carried out at Dr. Rose Private Hospital. For the first time in our country, a Birmingham hip resurfacing operation was carried out recently at Dr. Rose Private Hospital applying the fifth generation prosthesis. The surgery was conducted by Dr. Bálint Lehel orthopedic surgeon and chief of staff, who regularly conducts newest generation hip prosthesis implantation surgeries in England.

The implant most commonly applied world wide, with the longest lifespan, together with the special operative procedure, for the first time, was recently carried out at the first private hospital of the capital city of Hungary.

The BHR-system procedure is not covered by state social insurance; therefore, the waiting time for this procedure in state hospitals can be extensive, in some cases, extending to several years.

Surgeries, applying the newest generation of implants that are not as traumatic to the patient’s hip and with shorter recovery periods, are not at all offered by state hospitals.

Nowadays, hip prosthesis procedures are the most common questions of public health care.

Orthopedic surgeons working in Hungarian state hospitals – due to the high price of the implants- have no opportunity to gain experience and routine in the field of special hip replacement procedures.

Certain procedure methods and prosthetics are not financed by the state, but even for state insurance covered procedures, patients have to wait several months, in some cases several years while their condition continues to deteriorate.

This is one of the main reasons why patients take the option of services offered by private establishments into consideration, where appointments are booked right away for surgical interventions, where they receive treatment from the most acknowledged specialists and the dilemma of plus gratuity can be forgotten.

The operation lasting 3 hours was carried out by Dr. Bálint Lehel orthopedic surgeon and chief of staff on the 4th of October, who has been applying this surgical technique for several years in England.

Less traumatic for the bone, implantation of the newest generation prosthesis is proposed primarily for the younger age group.

Recovery time is expected to be minimal, as well as goals of returning to an active life and improvement of the quality of life can turn out to be more successful.

It is also an important factor, that with this procedure the patient’s rehabilitation tends to be easier and unproblematic, the percentage of possible complications is lower.

It is sensible that since opening, the demand for high standard and quality treatment offered by our selected professionals has increased even for our inpatient ward.

An increasing number of people are willing to sacrifice more for their health, to prevent health issues evolving and further developing due to the vulnerability experienced with the public health care system.

We offer the highest standard of care and professionalism, with the collaboration of the most experienced team of general and surgical assistants.

For this specific intervention we asked a specialist to join our team who has been working abroad for the past 6 years, to ensure the best possible care and attendance for the patient. – said Dr. Elemér Illanitz, director of Dr. Rose Private Hospital.

Resurfacing hip replacement prosthesis is an implant surgery, where the femoral head and the femoral neck are preserved and reconstructed with artificial surfaces instead of amputation of the joint. Its primary benefit is that the femoral head does not need to be removed (compared with total hip replacement), it can be preserved and shaped to be able to be fitted with a joint similar to the original anatomical structure, having only replaced the surface with artificial material, metal.
To summarize: it is a less traumatic intervention of the bone, a biomechanical „metal on metal” surface reconstructive prosthesis, which requires the protection of the anatomical structure (bone, circulation, etc. ),.
This procedure was first applied 12 years ago; it is now a recipient of the FDA permit (an agency of the United States Department of Health and Human Services) in the United States. Up until now, this revolutionary option was not introduced in Hungary, so patients in need had no choice but to travel abroad for treatment.

Femoral head resurfacing dates back to the 1960s, but the results were modest with negative feedback, so the treatment was withdrawn from publicity.

Thanks to this operative technique developed in Birmingham, this procedure is now acknowledged in both Europe and in the United States, and is now considered an effective and successful reconstructional intervention.

This modern technology has reached Hungary as well, however, the financial cost of the implant applied is considered so high, that it will not be considered for state financed intervention by the performance and quantity limited Hungarian health care system.– professed Dr. Bálint Lehel, orthopedic surgeon and chief of staff regarding the first, fifth generation hip resurfacing operation, and he further added: I have learned this technique directly from Mr. Derek McMinn, the developer of the operation in Birmingham, where I presently practice.

In Hungary, only Dr.Rose Private Hospital offers this rehabilitative treatment, in exchange for financial compensation.

I have carried out this operation exactly as I would in England, thanks to the background offered by Dr. Rose Private Hospital.