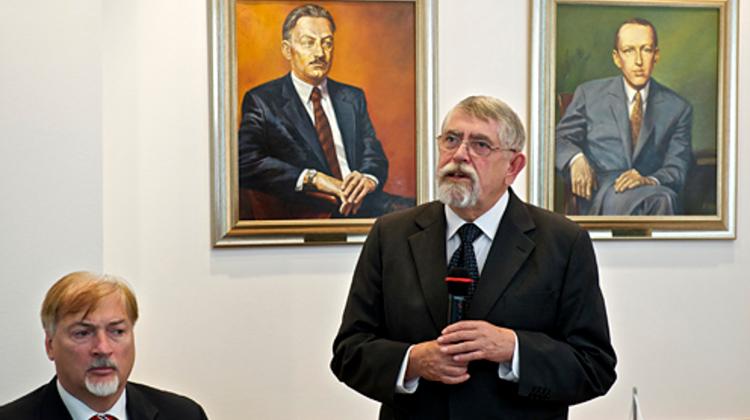 ‘The new building is a dream come true, which will serve the recovery of patients,’ emphasized Miklós Szócska, Minister of State for Health at the inauguration of the National Institute of Oncology’s (NIO) new block. György Matolcsy, Minister for National Economy also attended the ceremony.

In his speech, György Matolcsy thanked both the directors of the institute and the building contractors. The new surgery block is the latest weapon against the most severe disease destroying the body and which will hopefully make the fight against the disease more efficient, he said.

In relation to this, he emphasized that Hungary has been on the road to recovery for the past two years, which is indicated by several signs. We have done away with the old habit which previously ruined the country, he explained and went on to say that this happened because the previous government pursued a policy that was self-destroying and harmful for the country, driving it towards indebtedness.

‘After two years, we can declare that we have taken the first step towards recovery, since we have consolidated the public finance,’ he pointed out. The Minister added: there are still many issues to be addressed, since the balance of financial and real economics has to be restored, construction processes should be carried on and families should be strengthened.

Miklós Szócska talked about the building of the block as a dream come true. The Minister of State for Health drew the attention to the fact that treatment is already at the end of a process, however, lifestyle and prevention are also tools that can help stop the disease. There are still significant things that need to be done in the field of public health mobilization, he highlighted.

‘The Government has managed to set several foundations,’ pointed out Miklós Szócska, referring to the campaign against smoking, the organized screenings as well as the health visitor programmes, which are all necessary for fighting diseases.

Oncology treatment takes place at several levels all across the country: the general practitioners’ network is the basic level, the county oncology departments represent the middle level, regional oncology helps patients in the regions while the National Institute of Oncology works on a national level, informed the Minister of State. In order to provide quality services, the oncology centers can implement necessary investments through tenders under the Széchenyi Plan.

Miklós Szócska talked about the draft act which also includes the wage increase of health workers. He explained that its first phase is expected for July.

He also mentioned that funding oncology centers is a global problem, and that is why targeted financing of therapies shall be introduced.