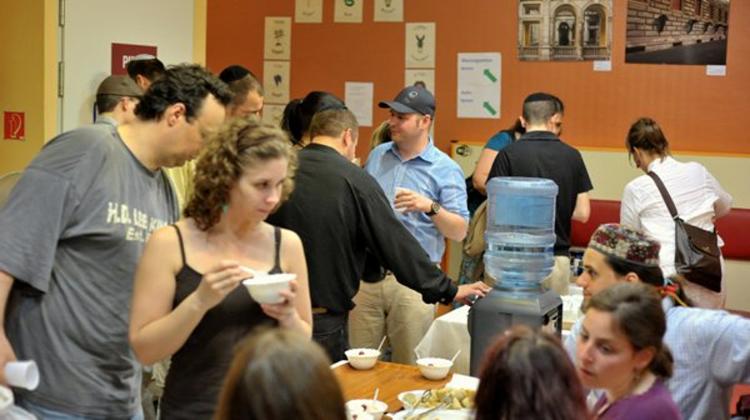 What could be old and new, religious and secular, written and unwritten? The meaning of the words: rule, regulation and order are very close to each other. Did you get it? Your logic was right. The topic of Savuot this year is: the law – in every possible sense. Savout celebrates the Giving of the Torah. This time we spend the entire night with studying; this is our way to rectify a mistake made at the time of the Giving of the Torah, when – according the tradition – we were still asleep.

During this night we engage in Torah study, get back to the basic written and unwritten regulations, rules and laws that shape our life. This year again, we will study them from many angles. We will discuss Jewish and non-Jewish laws and talk about equal treatment under the law, about the regularity of fashion and about different educational approaches.

There will be an english section so we can work in many dimensions. We will offer refreshments, hora, henna and glass painting. Join us, let’s spend the night together with learning.

* We privide kosher and non-kosher catering during the night.

* You can energize you creative part – and make arts and crafts or you can have your hand painted with henna.

Detailed program of the English track:

22:00 Michael MILLER (CEU): KABBALAH, THE SHECHINA AND STAYING UP ALL NIGHT ON SHAVUOT
In the 16th century, Kabbalists in Tsfat (Safed) introduced the custom of staying up all night on Shavuot, studying Jewish texts as a way of repairing the world and bringing about redemption. Coffee drinking, which became widespread in this period, contributed to the popularity of this new custom. This talk will look at the intersection of coffee an Kabbalah and the evolution of Shavuot observance.

23:15 SPRONZ Júlia (PATENT Association): WOMAN IN LAW
Most people would believe that women in Hungary enjoy equal rights as men: we can vote, we can work, we can inherit, we can hold possession.

Eventhough it is true formally, if we dig a bit under the surface, it turns out that many hidden legal mechanisms ensure the power of the head of family over other family members, in bigger scales both legal framework and its application guarantee the untouchability of our patriarchal society.
There is a common belief that female judges favor women when placing children at the mother in divorce cases. However, a research pointed out that in 90% parents mutually agree in such placements and when there is no consensus between the parties, the court places children at the mother only in 60% of the cases. This and many more examples from real life in my presentation are going to illustrate the invisible patriarchy in the legal system of 21st century Hungary.

00:15 dr. PERESZTEGI Ágnes (Executive Director, Commission for Art Recovery, Europe): RESTITUTION ISSUES OF HOLOCAUST ERA LOOTED ARTWORKS
There are fundamental differences between secular law and Jewish law approaches to the issue of restitution of Holocaust era looted assets. We will examine the halachic concept of ye’ush (despair) and the legal and moral obligation of restitution. For those who speak Hungarian, you may want to review the website: www.restitucio.org to learn about art restitution issues both in Hungary and abroad.

01:15 BORGULA András (director, Gólem Theater): IDF’S 10 COMMITMENTS – the Laws of the Israeli Army
The thing that you receive first when you enter into the Israeli Army is the Values of Cáhál. Is it a mission impossible to keep them? Let’s talk about it!

02:15 FEHÉRVÁRI András: (NON)FORMAL EDUCATION – EDUCATION WITHOUT RULES?
Our societies both secular and religious, have long believed that all those social, vocational, and indispensable basic knowledge, skills and abilities that is required of all of its members, has to be taught at a SCHOOL. A formal establishment with clear rules.

Today, this has been challenged by the ideas of non- and informal education: our clubs, camps, and even sunday schools teach very differently, and usually much more successfully. Some even argue, that the whole idea of school itself has to be redefined, modified, maybe even thrown out: apart from the first few years, kids should study by themselves, in peer groups, or not at all...

We will try to examine this picture, and find rules that we want, and rules we don't want for ourselves and our kids in education.