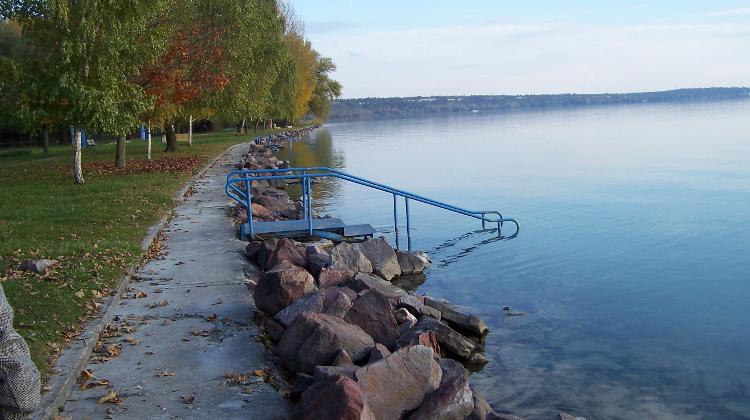 By Treehugger Dan: My weekend plans getting cancelled turned out for the best, as Chris and Nora invited me down to Balaton for a couple days. The family summer cottage has a fantastic view of Balaton. Built in 1969 before Markovecz was well-known, the layout is unusual in its family-centered design, and nothing at all like his later environmental designs incorporating living trees into the buildings.

Chris grilled it up the first night, making chicken, ribs, Wilkinson sausages, corn on the cob, zucchini, eggplant, Wilkinson burgers and mushroom caps stuffed with blue cheese. After a lazy morning the next day, and a breakfast of my famous banana pancakes, the family and I went to see Loczy Cave in Balatonfured.

The tour guide was very nice and even allowed us against regulations to bring Sam the dog in with us, saying "well, he came all the way up here, so he should also be permitted to come in." Sam was well behaved until he hacked up a fur ball so loudly that it echoed in the limestone cavern. We also climbed 20 minutes up a trail to the Jokai Tower for the great view to Balaton and the Kali Basin.

The next day Nora suggested we check out Hegyestu in Monoszlo. I have seen this awesome basalt volcanic structure from my bike a few times on the way to the Kali basin, but I had never been on top. The walk was not difficult, and the view is worth it. On the way back we stopped for a fresh langos at a very friendly stand across from the Revfulop train station, and then a drink at the Hullam Hostel bar.

Parking was nearly impossible in Balatonfured, but Nora finally found a spot and we visited the wine festival where I had been the previous week. Unfortunately, Skizo was not represented there, but we did sample at Soptei (Italian Riesling, Pecselyi Muscat), Jasdi (Pinot Gris) and Dobosi (Italian Riesling, Rose) and got a bit squiffed. There was a cool hanging chair hammock that we all almost bought, and still might, complete with footrest and drink holder.

The next morning Chris took my suggestion from a photo someone had posted on Facebook to grill thick slices of bell peppers and fry and egg in the middle of it and it came out well, along with fried potatoes left over from baking the evening before.

The rest of the day before my train back I delved deep into Barbara Tuchman's enjoyable Pulitzer Prize winning The Guns of August about the first 30 days of WWI.