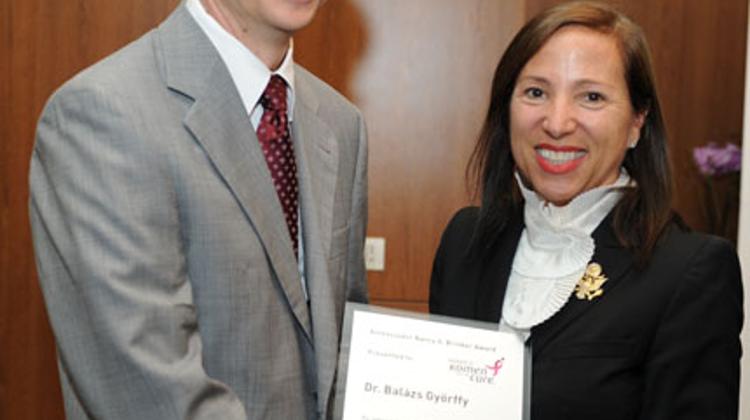 Good afternoon. I’m here today to present the third annual Nancy Brinker Award. Nancy Goodman Brinker served as the U.S. Ambassador to Hungary from 2001 to 2003. As you might know, Nancy Brinker promised her sister, Susan G. Komen, that she would try to prevent other families fighting breast cancer from suffering the way that she and her family had suffered. After her sister’s death, Nancy started Susan G. Komen for the Cure, which is now the world’s largest breast cancer organization and the largest source of nonprofit funds dedicated to the fight against breast cancer.

Around the world cancer is overtaking heart disease as the number one cause of death just as science is revealing more and more about the disease, its subtypes, and the reasons specific medications work on specific cancers and individuals. Within the next two or three years, cancer will be the leading cause of death across all of America. This is largely because prevention and treatment for heart disease has been more effective than for cancer. In Europe, more than 3 million new cases are diagnosed each year. And sadly, Hungary shows the poorest cancer related mortality in the continent, with forty-five thousand lives lost yearly due to this terrible disease.

During her time in Budapest, Ambassador Brinker helped establish the annual Bridge Walk across the Chain Bridge to build awareness of breast cancer and promote screening. Awareness is more important today than ever before, as early detection is one of the most successful tools in the fight against this disease. By encouraging women to participate at examinations, breast cancer mortality rates are constantly dropping. And not just in Hungary, but all over the world, wherever the Susan G. Komen Foundation is active. This is why it is appropriate that this prize is named after Ambassador Brinker.

Meanwhile, efforts on research to find cure are continuous. Just last month America’s biggest cancer center, the MD Anderson Cancer Center in Houston, Texas, announced a program to spend three billion dollars over the next decade to reduce the mortality rates for eight different cancers, including breast cancer. The program, called “Moon Shot,” after the 10 year program launched by President Kennedy to put a man on the moon, aims to make use of genetic technology which is becoming increasingly effective and inexpensive. My hope is that some of the bright young researchers in Hungary will get the opportunity to work on this program and contribute to the efforts of Ambassador Brinker and others to reduce the mortality of this disease. That is why it gives me such great pleasure to present the Nancy Brinker Award to Dr. Balázs Győrffy.

Dr. Győrffy received his Ph.D. from Semmelweis in 2005 and spent a year on a fellowship at Harvard Medical School. Currently he is a cancer researcher at Semmelweis University, where he teaches and supervises graduate students. His main field of study is personalized breast cancer medicine, both in developing better ways of predicting individual responses to medications, and in identifying ways of targeting different subtypes of breast cancer. Two of his papers have been accepted for presentation at the San Antonio Symposium, the world’s biggest gathering of scientists who do research on breast cancer. This Nancy Brinker Award will make it possible for him to attend the Symposium.