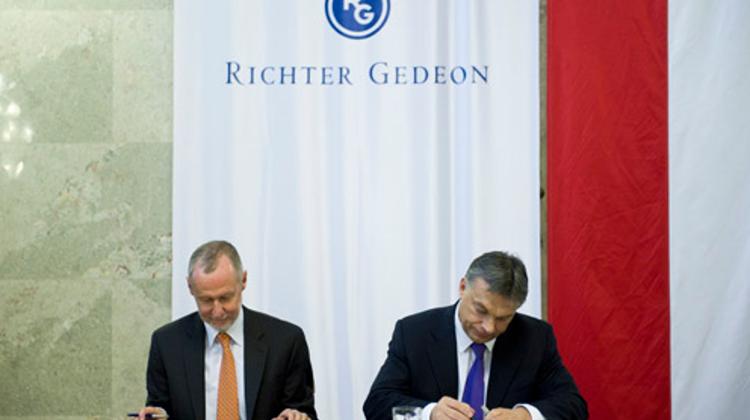 At a ceremony held in Parliament, the Prime Minister called Richter a success story and said the company played an outstanding role in the national economy. The government aimed to help Hungarian pharmaceutical production remain a global leader in the future and will support research and development of new drugs.

Viktor Orban added that the government had a special responsibility towards Richter Gedeon as the state was a shareholder. Richter is the only Hungarian pharmaceuticals firm which operates without foreign investors and with Hungarian management, supplies over one hundred countries worldwide and gives jobs directly to 5,000 and indirectly to 10,000 people, Orban noted.

It is Richter that spends most on R+D among Hungarian companies, Orban said, citing as an example a biotechnology plant built in a greenfield investment in Debrecen (E) in April. The 25-billion-forint (EUR 88.3m) plant opened 120 new jobs in the city.

The Prime Minister said the government planned to sign long-term strategic partnership pacts with several other large firms which play an important role in the Hungarian economy. He said the agreement was a new innovative economic tool in Hungary, which helped the country stay afloat. The interests of the companies involved will be guarded by the government, he said.

The current agreement is second in line after the one signed with Coca-Cola.

"The Hungarian government counts on successful companies, in a way that it tries to help embed them into the network of the Hungarian economy," Viktor Orban stated.

Erik Bogsch, CEO of Hungarian pharmaceutical manufacturer Richter Gedeon said Richter Gedeon's aim was to be independent, that its decisions should be made at the company headquarters in Hungary, while also keeping the interests of the Hungarian economy in mind to a maximum.

He said Richter was very committed to biotechnology and plans are to develop five new products at the Debrecen plant by 2020. He added that the company plans to spend 20-25 billion forints on investments in Hungary, spending the most on R+D in the region.

The present agreement was an acknowledgement of Richter's key role in the Hungarian economy.