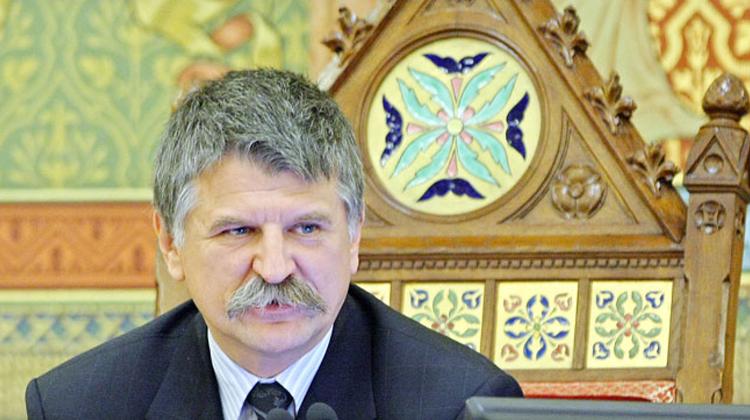 Commenting on the Speaker of Parliament’s recent radio interview, left-wing columnists accuse Mr. Kövér of proposing the revival of a rule by decree system. Conservative pundits as well as a group of left- liberal constitutional lawyers say that Mr. Kövér had no undemocratic intentions, and agree that the current legislative practice is far too bureaucratic.

In an interview to Inforádió, House Speaker László Kövér said that as the democratic transition period concludes, future Hungarian governments (regardless whether they are of the right or the left) should enjoy more regulative freedom. He recommended following the practices of countries with longer democratic traditions. When asked if he has “rule by decree without its bad connotations” in mind, Kövér replied in the affirmative, and added that Parliament should work out the basic legislative structure rather than regulate every detail of public life.

If the executive enjoyed more freedom, Parliament would have more time to supervise the government and to discuss really important policy matters. When he was accused of proposing the reintroduction of rule by decree – practiced in Hungary under the Szálasi government during the Nazi occupation, then later in the Communist era – Kövér said he wanted to increase rather than decrease the power of Parliament.

In Népszava, Tibor Lengyel calls the Speaker’s statement a retreat and argues that Mr. Kövér’s past statements clearly suggest that he wants to stamp out both the opposition and democratic Parliamentarism. The left-wing columnist recalls that Mr. Kövér earlier accused the left of ‘treason’ and proposed that plenary Parliamentary sessions should be held every third week only.

Rule by decree may be helpful in times of emergency, but there is no need for it in democratic and peaceful times, not marked by the need for swift legislation, Róbert Friss comments in Népszabadság. The left-wing pundit believes that the proposal fits into the Orbán government’s efforts to silence its critics and weaken democratic checks and balances. In his concluding remark, Friss wonders whether Mr. Kövér’s statement nine months before elections should be interpreted as an open threat.

Reflecting on Friss’s opinion in Magyar Hírlap, Péter Szentmihályi Szabó accuses left-wing critics of deliberately distorting Mr. Kövér’s statement. The pro-government pundit contends that the Speaker only wants to speed up legislative processes and reduce unnecessary red tape in Parliament without weakening the supervisory role of the House. Changes in that direction, Szentmihályi Szabó believes, will be even more pressing after the 2014 election, since the new Parliament will only count 199 members instead of the current 386.

Speaker Kövér clearly had no intention to propose the revival of rule by decree, a group describing themselves as “Constitutional Lawyers” write in the left-liberal Heti Világgazdaság. Mr. Kövér used an inappropriate term to describe a reasonable idea, and thus the hysterical reactions are unfounded, the authors contend. Rule by decree means that the government can ignore Parliament, whereas Mr. Kövér recommended that Parliament should authorize the government to work out the implementation details of specific laws.

Under the current legislative practice, Parliament is expected to specify many practical details of legal regulations, which slows down legislation and also takes time from meaningful Parliamentary debates on more important issues, the bloggers remark. The present practice only serves the interest of different lobby groups who can easily identify the loopholes in laws which then cannot simply be modified by the government, but need to be amended in Parliament.

Örülünk, Vincent, a blog sharply critical of the government accuses the right-wing administration of intending to regulate all spheres of life and suggests that Mr. Kövér should recognise that as the real reason why Parliament is overburdened.

The left-wing blogger calls the new centralized system of public education mindless, and contends that measures like the “nationalization” of the sale of tobacco products as well as the swift introduction of a new highway toll collection system are the main causes behind the over-bureaucratization of Parliament.