Xpat Opinion: How Is The Internet In Hungary Any Less Free This Year? 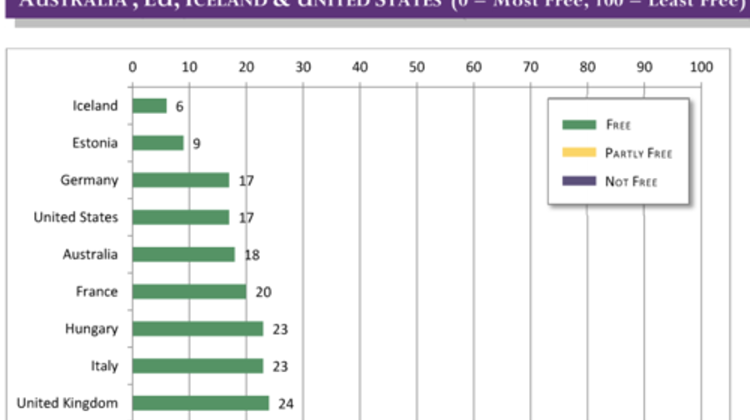 The 2013 edition of Freedom on the Net, an assessment of internet and digital media published by Freedom House, ranked internet in Hungary as “free,” but to the astonishment of many, it also downgraded Hungary’s score. Why?

Let’s begin with the bottom line. The Freedom House methodology uses a scale from 0 to 100, the lower the score, the greater the freedom. The study ranks Hungary as free, with a score of 23, which is equal to Italy, three points behind France and one point better than the United Kingdom. The Internet in Hungary is, like the rest of Europe, “free.”

But the headlines concerning Hungary, of course, were all about the slightly lower score this year, four points lower than last year’s 19. The study evaluates countries in three areas: obstacles to access, limits on content, and violations of user rights. It docked Hungary by two points in the category of limits on content and two points for violations of user rights.

That left me scratching my head. What on earth happened in Hungary over the last year that caused a decline in internet freedom, specifically greater limits on content and violations of user rights?

I’m still wondering because the study does not provide a single example of limits on content. Not a single one. The section begins with the following:

“The government does not currently mandate any type of technical filtering of websites, blogs, or text messages, though online content is somewhat limited as a result of self-censorship, lack of revenue for independent media outlets online, and the dominance of the state-run media outlet.”

First of all, a lack of revenue for online, independent media outlets is not an internet freedom issue, certainly not in Hungary. Period.

Secondly, this claim that there’s self-censorship in the Hungarian media is a favorite of those who claim that Hungary’s media is less than free. This, in a country where reporting by a popular newsweekly, HVG and its online version hvg.hu, played a major role in causing the resignation of the president of the republic over allegations of plagiarism, a case that the report itself mentions. Self-censorship? The report fails to provide any real examples.

Thirdly, “online content is somewhat limited as a result of,” according to the report, “the dominance of the state-run media outlet.” Seriously?

Check the Alexa scores for websites in Hungary. The fifth most popular website in the country (after google.co.hu, facebook.com, google.com and youtube.com) is index.hu, a privately owned news portal that is hardly pro-government. The seventh and twelfth most popular sites are blog.hu and blogspot.hu, hugely diverse blog communities where one can read any flavor of content. Origo.hu, another popular news source, is also in the top ten. HVG’s website ranks 19th. While these news sources also use material from the state’s news agency, MTI, they are hardly dependent on it. You have to scroll quite a ways down to find a government media outlet. That’s not exactly what I’d call dominant.

The study’s argument that there are limits on content rests on the claim that revisions to the criminal code “could allow the government to block websites if host providers fail to respond to takedown notices.” The criminal code, though, states clearly when a takedown order may be issued: to fight child pornography, crimes against the state, and terror attacks. And has it happened?

By the way, such provisions are quite common to other western democracies. Heard the recent story about the FBI’s crackdown on the website Silkroad?

It also mentions the case of two blog owners being sued for defamation based on comments that appeared on their blog. But the fact is they took it to court and the courts in the first and second instance found the content to be defamatory.

Finally, the study also mentions the case of a physical attack against a reporter from index.hu, whose nose was broken by an extreme-right protester during an anti-government rally. That’s terrible, to be sure. But it was an isolated incident, not part of some kind of growing trend, so how is it an example of a violation of user rights?

Am I making too much out of this? Afterall, the study ranks Hungary as free right along side other European democracies. The problem, though, is that the poorer score and narrative create the perception that internet freedom in Hungary is somehow declining when in fact what we find is a burgeoning online community, rich in content and diversity. Any objective consumer of Hungarian-language online news and information could easily come to the conclusion that in fact it’s more dynamic and freer than ever before.