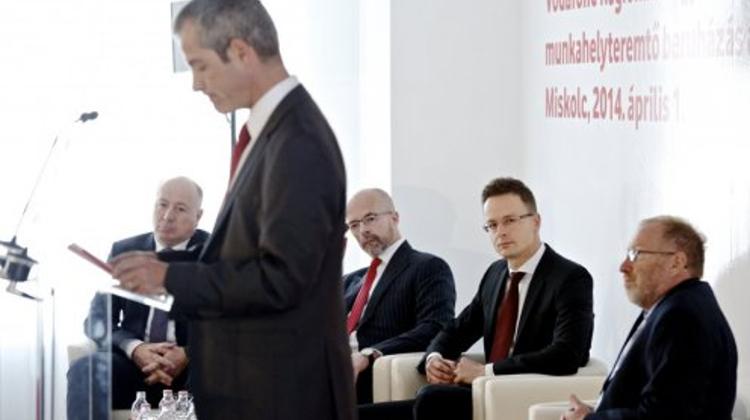 Vodafone will further expand its regional customer service centre in Miskolc over the next one and a half years, CEO of Vodafone Hungary Diego Massidda announced on Tuesday. State Secretary for Foreign Affairs and External Economic Relations Péter Szijjártó was present at the announcement and noted that Vodafone’s expansion is further evidence of Hungary’s growing competitiveness.

The State Secretary stressed that Hungary has chosen a new economic strategy with the goal of making the country the production centre of Europe.

To this end, a number of changes have been implemented by the Government, including the reform of the tax system, the higher education and vocational training systems as well as the labour law.
He also pointed out that employment has increased significantly, Hungary is on the path of economic growth and industry’s contribution to overall economic performance is the third highest within the EU.

More and more production capacity are arriving in the country, while companies already present in Hungary have begun to set up their service centres here, he said, adding that in recent years, the service sector has been responsible for a major proportion of foreign investment.

There are currently eighty such centres in Hungary, employing more than 30 thousand people. Two-thirds of the centres are planning further expansion partly because the Government has recently introduced measures that are beneficial for this sector.

The event was also attended by British ambassador to Hungary Jonathan Knott, who mentioned that there are still many untapped possibilities with regard to bilateral trade between Hungary and Great Britain.

György Beck, Chairman of Vodafone Hungary, added that the company, which has been present in Hungary for 15 years, made an excellent decision when it opened its customer service centre in Miskolc in 2009.