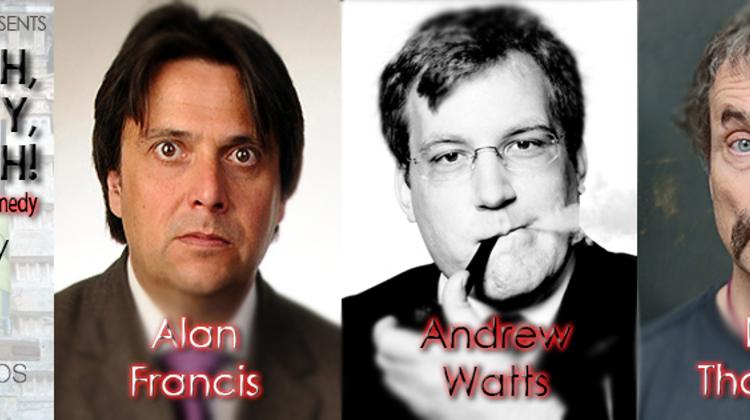 Due to popular demand, Brody Studios features the second in the series of English comedy nights hosted by Dave Thompson, best known as a brilliant one liner, writer and performer in Harry Hill’s TV Burp, and former Tinky Winky from ‘Teletubbies’.

The second comedy night features two international stars: Andrew Watts and Alan Francis. Ex-lawyer turned comedian Andrew Watts is one of the most talked-about acts on the Comedy Circuit. As seen on FHM’s Stand-Up Hero (ITV4) and The World Stands Up (Comedy Central) Andrew is an award-winning comedian with “intelligent wit, honesty and more interesting and provocative thoughts in his show than many comics manage in a decade” – The Scotsman.

Steve Coogan’s writer Alan Francis has a comedy pedigree that includes writing and appearing in Alistair McGowan's Big Impression, Fist of Fun, I’m Alan Partridge, The 11 O'Clock Show, and Psychoville. He also wrote for Steve Coogan’s latest series ‘Mid Morning Matters’ and his own BBC Radio 4 series ‘Inside Alan Francis’. “Alan’s delivery is pitch-perfect, and the timing is spot on” according to the The List.

“Andrew Watts is posh and witty ... exquisitely funny ... one of the new comics making waves“ – Time Out UK

“Alan is thought-provoking, eloquent, and entertainin” – The Scotsman