Fradi Family Holiday: The Eagle Sculpture Has Been Inaugurated In Budapest 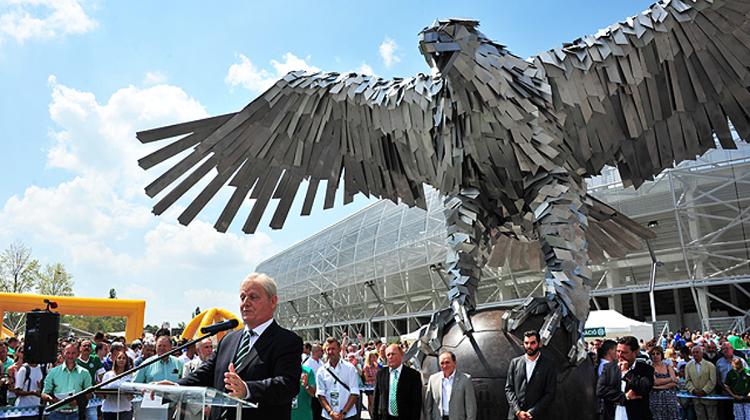 As long as the FTC in not playing on international level, we cannot speak of the rise of Hungarian football, emphasized Mayor István Tarlós in his ceremonial speech during the inauguration of the Eagle sculpture, which was held as part of the Fradi Family Holiday. The mayor expressed his hope that the 15 ton sculpture with its 16 meter wingspan will become the new popular sight of Budapest.

In his speech István Tarlós has expressed his appreciation for the achievements of the Ferencváros club, and recalled that in 1965 FTC won the predecessor cup of the European League and UEFA, the so-called Inter-Cities Fairs Cup.

Besides, Flórián Albert, as the only Hungarian so far, had won the Golden Ball for the best European player in 1967. The club itself presented Hungarian sport with several Olympic champions.

The Family day of Ferencváros, which had been organized the day before the stadium handover match against Chelsea, welcomed thousands of curious visitors.

Fans could participate in a free stadium tour, and during the whole day there were other entertainment programmes, like concerts or personal meetings with the legendary members of the club.