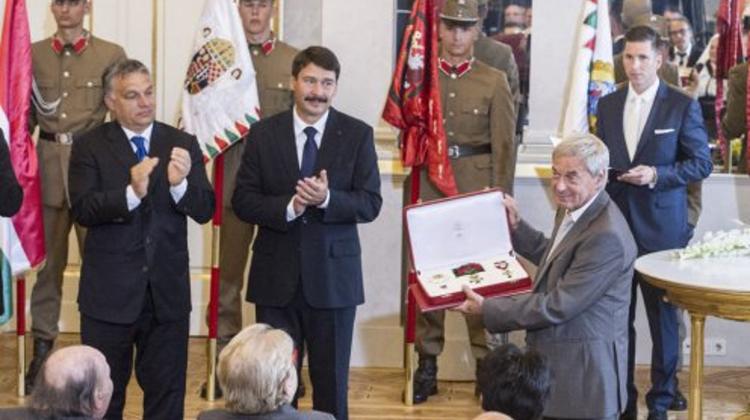 The award is presented in recognition of the most prestigious special merit in the interests of the country, an outstanding life’s work and significant honours acquired within the international arena.

Imre Kertész was born in Budapest in 1929. He was interned in the Auschwitz and Buchenwald concentration camps at the age of fourteen, and returned to Hungary following their liberation in 1945. His most famous work, Fatelessness (Sorstalanság), was published in 1975 and immediately won great acclaim both in Hungary and abroad.

On 10 October 2002, he was the first ever Hungarian to receive a Nobel Prize for Literature for Fatelessness, from which a film directed by Lajos Koltai was produced in 2005.

Ernő Rubik was born in Budapest in 1944. In 1974 while working as a professor of architecture at a Hungarian college, he invented the world famous three-dimensional puzzle, the Rubik's Cube. On the 40th anniversary of this invention, a major exhibition, titled “Beyond Rubik's Cube” has opened at the Liberty Science Centre in New Jersey, with financial support from the Hungarian Government.