How Could A Hungarian Red Wine Win Accolade In Paris? 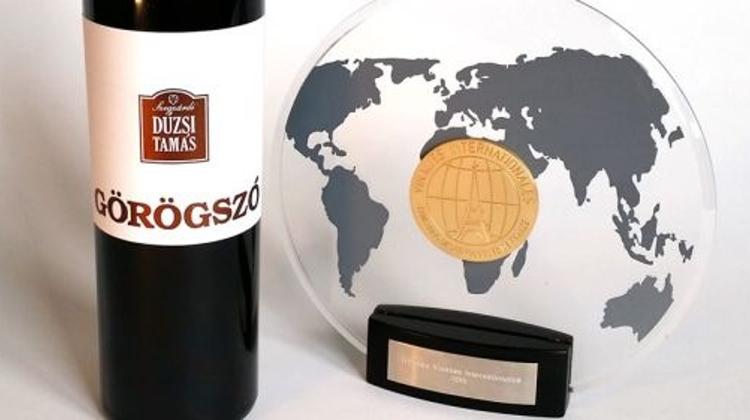 I've always fought against high-alcohol, high tannin, and hard to drink wines. A wine shouldn't have to punch you in the nose, says Tamás Dúzsi, who's won the trophy for best red at the 21st Vinalies Internationales in Paris, an all-time first for a Hungarian wine.

Q: Were you surprised that Görögszó (Greek Word) turned out to be a star wine?

A: Not exactly. There have been hints. In 2013 the 2009 vintage of Görögszó was one of 16 wines to win a special prize at the Les Citadelles de Vin competition in Bordeaux, France, and those 16 were chosen from the world’s best. This year the vintage of 2011 of Görögszó was the winner, so it’s sort of ongoing.

Q: Have you tapped into a global trend?

A: In plenty of places garish, high-tannin wines have been the winners. But at these two competitions, the most elite ones in France, the jury is savvy enough to pick up the delicate melodies amidst the blaring music. And that marks a change in trend. I’ve always been against running wines heavy in alcohol and tannin, that were tough to drink. Top-of-the-line wines need to be pleasant and easy on the palate. They shouldn’t have to bop you on the nose. Classical music isn’t beautiful because it’s hard to play. Both wine and music should be enjoyed – they need to permeate you, body and soul. The garish wine timeline is dipping downhill. Even the jury underlined the harmony of Görögszó.

Q: Do you think it’s ahead of its time?

A: A wine aficionado psychiatrist friend of mine told me, back when I had an ugly illness, that “you have a really strong nervous system because people who show as many symptoms as you do in treatment, end up in a bed in my ward.” He also told me that “in style, you’re ten years ahead of the pack.” He regularly checks out wineries and knows what he’s talking about. He was right on target with what he told me ten years ago.

Q: Here in Szekszárd, do they say you’re marching to a different drummer?

A: Sometimes. But right now that different drummer looks better than the mainstream one. I don’t think it’s really a different drummer; it’s just that I work a lot. I manage the vineyards and the winemaking division, which doesn’t give me much time to attend local programs. My seventh-born just celebrated his 18th birthday and my oldest is just starting to work in the business, so I still have to work hard.

Q: Did you follow much the same path with the rosés, that won you prize after prize?

A: At the biggest rosé competition in Cannes I topped the award list with 27 medals – there too, the light and refreshing varieties are coming into their own. There’s even a rosé research institute and we think alike even though I make my rosés to fit my own ideas and tastes. Rosé sales are up in France because they’re become nicer and more pleasant. The French make the rosés much the same as I do, except that they research it.

Every year they organize a wine-tasting program using my wines as the benchmark and they advise their producers based on that. We have an easier time in Hungary because our climate is more suited to rosés. Our soils and varieties mesh better, and we have caught on that the outcome is a sellable style. I have sixteen samples of wine made up, and the best rosé comes from Blue Franc (Blaufränkisch or Blue Limberger) grapes, which are plentiful here. This means that the opportunity is right there, on a silver platter so to speak.

Q: So why aren’t we a great power in the wine world?

A: Before the Treaty of Trianon, signed in 1920, [“By the terms of the treaty, Hungary was shorn of at least two-thirds of its former territory and two-thirds of its inhabitants.”] Hungary was the fourth greatest power in viticulture and wine-making following France, Italy, and Spain. Trianon was a double whammy when it came to grape growing and wine-making since two thirds of the capacity remained within Hungary but the market was lost. So, half the existing vineyards dried up because there was no one to buy the wine.

There was no such thing as an international market either, because everyone was mad at everyone else – that’s the usual case when peace treaties are unfair. We became an also-ran in grape-growing, and were even locked up behind the Iron Curtain. We kept winning prizes with our red wines, but no one cared.

They wouldn’t buy from us because, they said, they could get pretty much the same wine in Bordeaux and Burgundy where they had centuries’ long ties. But, it helps Hungary’s reputation if they know that we have some outstanding wines because then at least they don’t try to sell us theirs. Actually, often enough they’ve never even heard of us. My son studied in Montpellier and would organize tasting sessions. His professors say their only knowledge of Hungarian wines is what they learned from my son.

Q: Why can’t we break out of this rut?

A: At international fairs I’ve seen some countries from the old Eastern Bloc spending huge amounts of money on effective wine marketing campaigns. The result is that the world knows much more about them than about us. When an aristocrat’s property is taken away, he remains a gentleman because that’s how he was raised. We’re like that, too.

We still believe that we are “a great power in the wine world.” We believe we are good, that we set examples, and have truly good results. But, maybe we shouldn’t try to focus on selling wine to London. We pushed sales to London for years, unnecessarily, because they buy most of their wines from their former colonies. We need to look towards Germany, Poland, the Czech Republic, and Russia. I think that these countries are where we need to work hardest to build trade ties.

Q: You’ve just come from Dusseldorf. What did you find there?

A: I was at the world’s largest wine show – we had a pavilion there last year, too. Germany is a major target for us. And not only do Germans show up for the ProWein exhibit. So do merchants from Poland, the Czech Republic, Belgium, Slovakia, Russia, and China. And all are interested in Hungarian wines. They like us and respect us and these exhibitions help us build trade ties. We really should pay more attention to grass roots diplomacy. If there were many of us who behaved decently and were friendly, the political world would have something stronger to build on.

Q: Your son, Tamás Dúzsi Jr., did his share of grass roots diplomacy, and not just in Montpellier.

A: When he studied in Lisbon he got in touch with the Hungarian ambassador there and organized a successful wine-tasting session.

Q: What do you know better than other winemakers?

A: Not everyone can see the forest for the trees. […] Every harvest and every vintage is different from the one before it, so how you respond to the differences is a matter of feel, experience, and observation. The most important thing is to get past the tough times with the given vintage and always try to produce the highest possible quality. 2014 was a very challenging year when I had to be very circumspect in choosing the right time to harvest if I wanted healthy grapes.

Q: But, style isn’t just a matter of decisiveness, you have to have a feel for it.

A: You need both the feel and the decisiveness. I don’t do anything that doesn’t feel right. I let my award-winning wines mature in barrels of Hungarian wood because I believe that Hungarian barrels are part of the Hungarian terroir, and when I buy them I’d like to contribute to the success of Hungarian businesses in general.

Q: At the age of 65, what gives you the strength to keep working? Back in 1994 you weren’t exactly young when you lost your job and started building your family winery from the ground up.

A: My grandfather was a landed peasant. Everything he had was taken away from him when he was 52 years old, and he had to get a job carrying mortar to the bricklayers. He never got the chance to get back to the land but somehow I was coded to believe that you should never give up. I was an athlete – a competitive bicyclist – and that wasn’t easy either.

Q: We have a saying about not fighting a headwind....

A: I don’t like wind because it’s insidious. With a hill I immediately know that if I have the strength I can get to the top, and if I don’t, I need to stay put. And I know that when I hit the hilltop I’ll find a downhill slope. But the wind? Where is it blowing from? I’ve never liked things that were invisible. I like clean issues even if they’re unpleasant, like a hill I have to climb.

Q: Does your Swabian mentality help?

A: Over the centuries, with a climate much worse than ours, the Germans learned that you had to work hard for everything. And after the Second World War they were very poor for twenty years and had to work long and hard. They had to get back up on their feet – that was a part of their upbringing. At any rate, the Swabians, including my relatives, always considered themselves Hungarian, even when they were forced into exile. If a person knows he has a job to do – such as raise his children – then he just has to do it. And if you’re ill, you just have to recover.

Q: “Though my soul withers away/ My Lord requires of me another day.” That quote comes from the Hungarian poet’s Mihály Babits’s Book of Jonah and was printed on the 2011 Görögszó label. In fact, you have literary quotes on all of your wines. You have even held poetry-reciting wine-tasting programs for small audiences.

A: We have had István Mikó, Klára Varga, and Milán Rusz, who heads the Serbian Theater of Hungary, singing and playing music at these social meetings – always to a full house. The name Görögszó (Greek Word) comes from the fact that once upon a time a Greek Orthodox cloister had a vineyard here – so Serbian poetry is a good fit. And I was so moved by The Book of Jonah that I learned it by heart. But professional actors recite it, not me. Still, they say that my recitation is as natural, emotional, and credible as the old folk when telling their stories to the youngsters.

Q: Does faith help in your efforts?

A: A good vintage is always a gift of God, or of Nature, depending on your preference. But, in any case it is a gift even though plenty of folk want to believe they did it themselves. I’m not a churchgoer but every Sunday I climb to the top of Furkó Hill and up there it’s just me and the Lord. I’ve often felt that when I’ve got big troubles, I get a helping hand. When a person thinks that it’s the end of the world, help comes from some unexpected place and things tend to work out.