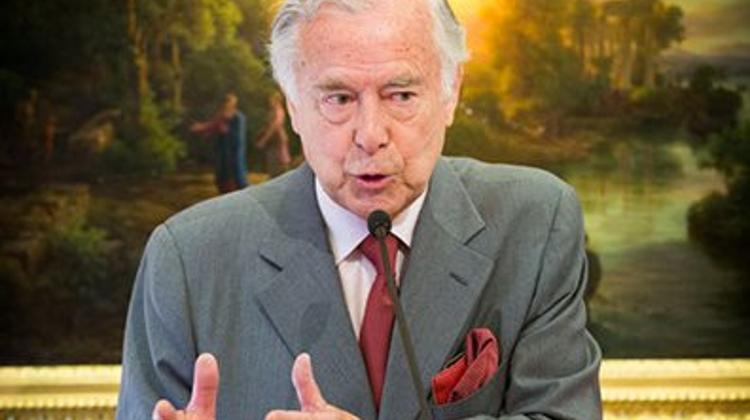 The season’s last Grandhouse luncheon on June 16 hosted Dame Jane Goodall of chimpanzee fame before a blockbuster rapt audience of 85 guests, a roster of ambassadors among them, this time not as usual at the Academy of Science but at Kogart House gallery restaurant along the World Heritage listed Andrássy út.

Sipping Malatinszky Winery’s gift of refreshing 2014 Le Sommelier Sauvignon Blanc at tastefully laid white clothed tables, named in honor of Dame Goodall’s simian friends, we were surrounded by owner Gábor Kovács’s prestigious private collection of early-18th to mid-20th century Hungarian paintings, in one of the city’s most beautiful classicist mansions (built originally as a summer residence for a legislator at the end of the 1800s).

As the sprightly 81 year-old Ms. Goodall took the podium, we were immediately transported to Africa as, excusing herself for not speaking Hungarian, she delivered a heartfelt whooping chimpanzee greeting* while we savored not banana frappé but creamed lemony cauliflower soup.

She loved animals from the very beginning as child and always considered them sentient beings, like her pet dog, adding, as anyone who has been close to a cat, dog or a cow for that matter would know. We are also animals, human animals, she reminded. Predictably a vegetarian, the deliciously al dente tomato-basil tagliatelle with roasted eggplant and a dusting of parmesan was certainly easier to swallow with a clear conscience than the wonderfully seasoned succulent mangalica spare ribs and celery mashed potatoes.

Considered to be the world's foremost expert on chimpanzees, her 55-year study of the social and family interactions of wild chimpanzees in Gombe Stream National Park, Tanzania, (Tanganyika at that time and a British protectorate) is landmark. Instead of numbering the chimpanzees she observed, she gave them names, an unconventional idea at the time, such as Fifi, Flo, and David Greybeard, the latter the first to befriend her.

She developed a close bond with the animals and became, to this day, the only human ever accepted into chimpanzee society, where she was the lowest ranking member of a troop for 22 months. She observed them to have unique and individual personalities, “capable of rational thought [and] emotions like joy and sorrow," giving hugs, kisses, pats on the back and even tickling.

As a result of her untiring work chimps are now listed as an endangered species and cannot be used to perform as circus entertainment or kept as pets. They are our closest relatives, with whom we share 98% of our DNA. [That 2% difference between chimps and humans may be in their favor.]

Dame Goodall shows no sign of slowing down, traveling 360 days out of the year as an activist in conservation, development and animal welfare. She is the founder of the Jane Goodall Institute (1977), with offices world wide, and the Roots and Shoots program (1991), with the goal of bringing together youth from preschool to university age to work on environmental, conservation and humanitarian issues.

Her experience and loving observation of the terrain of Africa, for one, is motivating her to cry out in her own voice, and perhaps the whooping crescendos of her chimp family, on behalf of saving our habitat for ourselves and future generations, at this the last moment.

In conclusion, Mr. László Szesztay, Commercial Director at Herend, presented our distinguished guest with a very appropriate porcelain of the three wise monkeys, macaques, as Ms. Goodall pointed out. Individually covering their eyes, ears and mouth, embodying the proverb, “see no evil, hear no evil, speak no evil,” it may be that clarion call against a position of silence over the sustainability of our dear home Planet Earth.

There being no injunction against “eat no evil” dessert, we were served homemade ice-cream with fruit and coffee, a satisfying end to our season of Grandhouse’s luncheons.