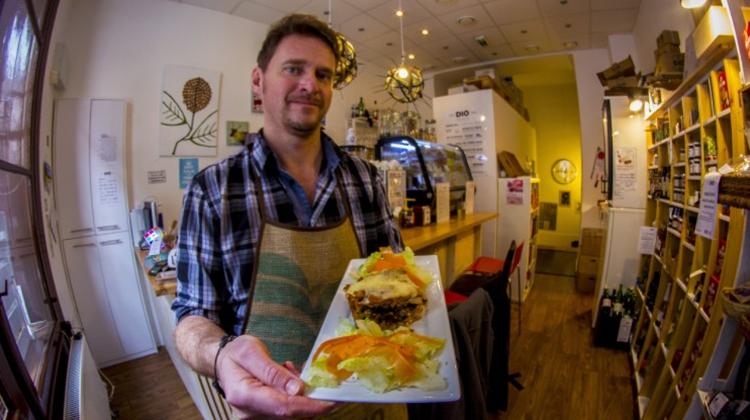 - Why walnuts?<br> - Because I like walnuts- came the simplest answer that could have possibly been given to the simplest question I could have possibly asked. <br> Because new restaurants grow out of the ground these days as if there were no tomorrow without them, it’s quite difficult to find a place that’s completely different from all the others.

Of course, this is not necessarily a problem and/or a requirement – we’re very happy if an Italian restaurant is as good as hell – but it’s nevertheless refreshing now and again to discover places such as DIÓ (Walnut) Delicate:cantine.

The shop in Király Pál utca, downtown Budapest, seems terribly smallish from the outside but arrived to the world with an unbelievable charm. First of all, everything in it is centred around walnuts. Secondly, it’s an Austro-Hungarian restaurant with an Austro-Hungarian person, Klaus, to it.

Klaus heads the actually not-so-small establishment like a one-man army, or rather had headed it, because since out visit, he has found help on some days in the person of Ádám Gálos, a familiar name from the Hungarian alternative rock band Intim Torna Illegál. There’s around fifteen square metres upstairs for eating, but there are quite a number of tables downstairs too, secluded from all the hustle and bustle. Klaus does wonderful Austrian dishes on the Austrian days, but it would be a shame to get stuck here because there are another four days arranged around certain themes, such as pasta, fish, etc.

Because the place puts on a menu, it’s irrelevant to devote much space to the food because the selection changes day to day, but we hada great soup and an Austrian speciality behind us after we visited. By and large, it’s a menu place, but there’s something else: walnut burgers. Yes! This miracle is a delightful mix of Klaus’s own walnut pesto, hammered meat, tomatoes, Lajta cheese and red onions, grilled together to form a post-Monarchy culinary marvel. Nevertheless, it can’t really be called a burger because “hammered meat” is actually a sort of ham, so it would be politically incorrect to call it a burger. The choice of name is understandable, but it’s more like an awesome hot sandwich than a burger.

The delicatesse section is also worth a mention. Klaus’s own walnut products can also be found here, just like wines from the family vinery and all kinds of Hungarian and Austrian delicacies. These are keenly used by Klaus for the cooking, causing the restaurant to appear in an even more special light. Klaus is a tranquil chap and the whole place oozes tranquility. As he works alone most of the time, it’s worth waiting for the food at the counter, but if we fail to do so, Klaus will chase us with the plate, but don’t forget: it’s a self-service restaurant after all.

Anyhow, you won’t have to put the place on the black list even if you’re not a walnut fetishist because the presence of walnut in the menus is more moderate – and if you’re an outright fan of the hard-shell nut, the gates of walnut heaven can open for you and Saint Klaus will welcome you inside with his dishes.