Mericano Bar, A Taste Of The Sicilian Apero Feeling In Budapest 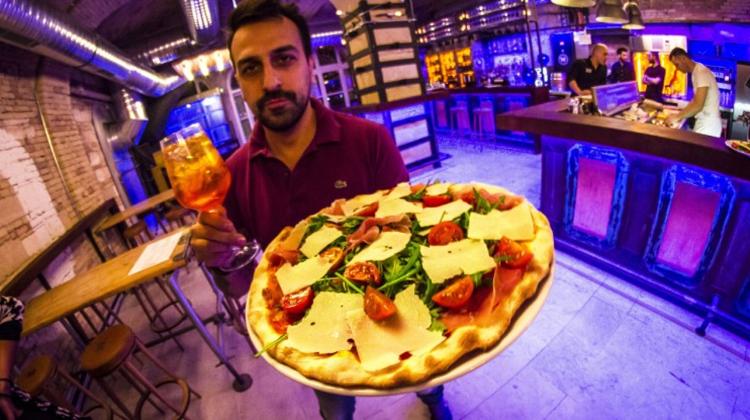 “Why should I open the 1000th wine bar when the city’s full of them already? Why shouldn’t I open a place which is unparalleled? A place where you can get a taste of the Sicilian apero feeling in a relaxed and fun atmosphere”, Salvo, the tattooed Italian businessman who himself, being a chef, mixer and owner of a massive bar, is actively engaged in the work with the legendary Italian mentality that sees him take the occasional dance in the middle of the place.

Let’s suppose that our working hours are over, we have an abundance of free time and we’re looking for somewhere to have a glass and bite in style. Even given this list of favourable conditions, we’re still able to ask ourselves the following simple questions: beer or wine? Chinese or McD’s? Should I order a pizza and buy a couple of cans of ber?

The worst outcomes often stem from the essence of the question, when we consider going to the restaurant or just have a bite to eat and head off to the pub for the booze? Feast on snacks and down beers until knockout? No-no.

Italians, on the other hand, perfectly know how to wind down after a day’s work. They are simply unable to just sit down and drink and constantly nip this and that to go with drink. This so-called apero culture, a general custom in Italy for a long while now, has arrived to Hungary only recently and Italians living in Hungary are working on establishing it here.

It was in this spirit that Mericano opened in Sas utca, central Budapest, as the cross-section of an American cocktail bar and Italian cuisine moved into an atmospheric and lofty space, peppered with some show. As a cocktail bar, it absolutely fills a gap in the area, and of its kind, in the entire country.

You are introduced into apero culture as soon as you order a drink by getting some sort of nibble with it for free. This is good for both us and them because it immediately sparks appetite – and almost all tables have a view on the open kitchen where the Italian wonder meals are prepared, so it’s next to impossible to avoid a glimpse at the menu.

Reading the food menu is an easy task – the selection of oven-baked pizzas, piadinas and salads isn’t that big, but this is is unimportant. The food won’t crash down to the cellar under the weight of the toppings, here you’ll get the type of pizza eaten by a real Italian in Sicily: top-notch ingredients and just as much of them as needed. We chose a Mericano pizza, beautified by the waves of San Daniele hams in a sea of ruccola.

Although you can get lost in the pizza, it’s nevertheless light and thin, and coming across a multitude of textures with every bite is a heavenly experience. The ham is some of the best in Italy and almost melts once you put it in your mouth. The ruccola is fresh and crunchy – not the type that tastes of soil but the genuine nutty one.

You can buy it here and there in town, but mostly the twisted Western versions. However, piadinas are a rarity here in Hungary and even where available, usually they make the Westernised version, deprived of Italian mentality. These are, of course, also good, but Mericano serves the traditional version, with only a couple of types of fillings to allow us to enjoy each ingredient individually.

They also have burrata, which, in my modest opinion, is the galaxy’s second best product. Speeding by, one of the waiters lets us know that the original Italian buffalo mozarella is nothing short of a wonder. And you can find traces of it on pizzas and in piadinas alike.

Now for the alcohol! All of the bar’s several counters have been shaped to enable off-handed working flair (you know, when bottles fly across the air), to the bemusement of valued spectators waiting to be served.

Bars are stocked until the brim with spirits – there are 42 types of whiskey alone! -, with better-known brands, rarities and more costly classics all available. You can find original Mexican tequila in hand-painted skull-shaped bottles, chocolate Bailey’s, vanilla-flavoured vodka and an endless range of others – it’s probably the broadest selection of spirits in town.

The staff are like a bunch of your friends – helpful and professional but just as relaxed as a Friday evening beer on the balcony. You’ll find Italians among the mixers and chefs to lend the place an authentic feeling, and every now and again they invite famous mixers to keep the crowd amused.

To round it all up, Mericano is a new place that is new through and through. Instead of standing in the line of the area’s Italian restaurants and bars, Mericano wants to show us something new and even teach a bit to catch that apero feeling with a satisfied smile and raise the everyday version of eating and drinking to a higher, more pleasant level.