National Geographic Presents ‘The Future Of Food’ In Budapest 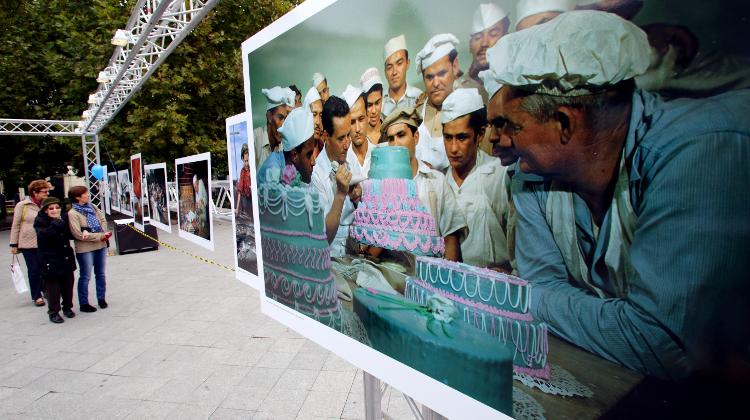 ‘The Future of FOOD’ looks at food from all angles and on all continents. It includes portraits of food producers – a potato farmer in the Peruvian Andes, a cabbage grower in Ukraine, a stunning underwater shot of scallop aquaculture off the Pacific coast of Canada.

NATIONAL GEOGRAPHIC’S photographers also ventured into the topic of food itself. What people eat, and how much. Their images are surprising, and reveal vast differences from country to country, family to family.

The Budapest edition of NATIONAL GEOGRAPHIC’s ‘The Future of FOOD’ was organized by FAO with support from the Ministry of Agriculture of Hungary to mark the 70th anniversary of FAO’s founding.

The Organization’s Regional Office for Europe and Central Asia is hosted by Hungary – on Benczur utca in Budapest – and coordinates an active field programme in countries to the east – including the Western Balkans, Turkey, the Caucasus, and Central Asia.

“The level of public interest in food topics that we are seeing today is unprecedented,” said Vladimir Rakhmanin, FAO Assistant Director-General and Regional Representative for Europe and Central Asia. “This can only be positive, because the food challenges we face are significant.”

At a global level, FAO has posed the question: how will planet Earth sustain 9 billion people by 2030? An informative infographic in the exhibition presents the problem very clearly.

“Here in our region of the world,” Rakhmanin continued, “malnutrition in various forms continues to be an issue. Together with our member governments and partners, FAO is working for the eradication of hunger and malnutrition worldwide, and for the sustainable management of our planet’s natural resources.”

Dr. Sándor Fazekas, Hungarian Minister of Agriculture, praised the largest specialized agency of the UN for its role in the establishment of global food security. The Hungarian Minister recalled that World Food Day -- which is observed every year on 16 October – was initiated by Hungary in 1981.

Since then, the foundation of FAO has also been commemorated on that day. Fazekas highlighted the professional and diplomatic relations between the Hungarian Government and FAO which date back half a century. He emphasized that as part of the cooperation the Ministry of Agriculture supports countries afflicted with food insecurity and crises, promoting the sustainable development of food production.

“We conceived of the magazine series, which launched in May 2014, as an ongoing dialogue with our print and digital audiences, designed to offer context and deeper understanding of challenges and solutions to feeding the world’s population,” said Gary E. Knell, president and CEO of the National Geographic Society.

“The topic of food is relevant to all of us, and it quickly became apparent that we could have the most impact if we organized our efforts to span several years, allowing us to make investments in developing deeper layers of storytelling and engagement around the issues.”