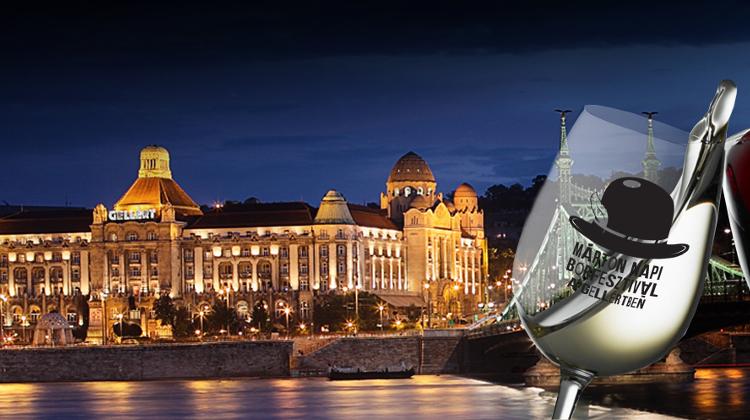 On November 5-6-7-8 Hotel Gellért organises the traditionally most exciting Martin Day’s event of Budapest. The Martin Day’s Wine Festival – already fifth in a row and now extended to four days – attracts visitors to the highly reputable and stylish hotel with the slogan „Wines-Geese-Spices”.

This time Gellért also prepares with a gastro sensation: the world premiere of the Peking goose and goose sushi.

The Martin Day’s Wine Festival gets started with beer
Organisers this time followed the advice of Hungarian proverb „wine after beer”: on Thursday – „Day 0” – beer is put in focus. One can taste beer cocktails, and historian Csaba Katona delivers a training course on beer – his presentations beat any stand up comedy. Also, „too many cooks will NOT spoil the broth” - Paul Mizener, Scottish chef and András Frideczky, chef of the Gellért Beer Cellar will delight visitors with Hungarian and Scottish culinary creations, as well as special hand craft beers.

Wine after beer
Next day beer is followed by wine. On Friday the selection of Wine and Market introduces the crown jewels of excellent wine manufacturers from rural Hungary – these wines are rarely found even on the shelves of specialty stores in Budapest. Saturday is devoted to the selection of the Wine Association, featuring the most outstanding names and most excellent wines. Unlimited wine and pálinka tasting is also joined by gastro exhibitors, including Aranyszarvas (Golden Deer), Bük Cheese as well as Zing Burger – by now known as token of excellence. Meanwhile, presenters at the training course on spices organised by Magyar Konyha (Hungarian Cuisine) introduce us to the world of Hungarian spices, and spicy Hungarian wines.

Visual treats and extraordinary flavours: Suite Restaurant
Suite Restaurant, the new gastro genre created by Hotel Gellért last year will welcome visitors again, offering a marvellous view from the deluxe apartment, and presenting László Héjja, chef of Hotel Gellért bringing the magic of the East to life, with his gastronomic masterpieces. He will also have a guest: the internationally celebrated Oriental dancer Mercédesz Nieto. The next day, jazz singer with a velvety voice, Eszter Váczi takes guests back in time to the American Great Gatsby era – also happens to be the time when the hotel was built – coupled with excellent dishes, again.

Every evening Party time
Both days will end with an After Party: on Friday Sister Act, the concert of Vera Tóth and Gabi Tóth will take the stage, followed by DJ Garami, while on Saturday band Kiscsillag and Anima Sound DJ Set will provide excellent entertainment. During the After Parties, one of Hungary’s most trendy and popular wine bars, DiVino also welcomes the guests.

Entry for the beer training course costs HUF 3,490 while the price of the 4 course Scottish-Hungarian beer dinner, including entry to the beer training course is HUF 6,990. The one day ticket for the festival and the after party, including unlimited tasting and a tasting glass costs HUF 5,990 – while all these coupled with the „5 spices – 5 restaurants” wine dinner costs HUF 12,990. The price of a ticket for the Suite Restaurant and the festival amounts to HUF 14,990.

The telecommunication partner of the wine festival is Vodafone.