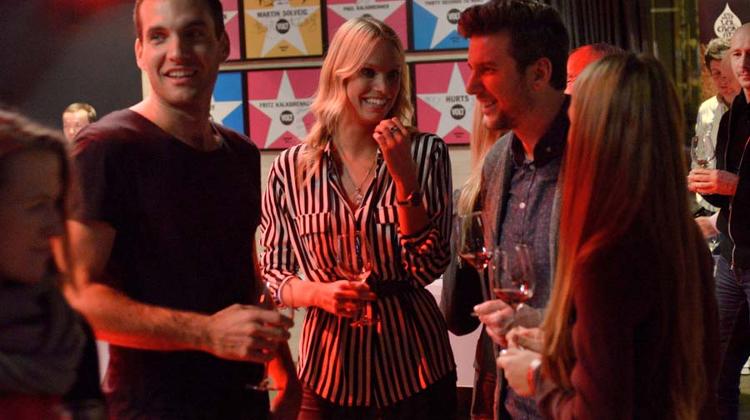 Last Thursday, 3 December, XpatLoop.com held its latest wine club event in Akvárium at Erzsébet Square, downtown Budapest. Expats and internationally-minded Hungarians rubbed shoulders and tasted a seclection of 18 wines from a good handful of Hungary’s top producers. Here's a quick tour of the six different regions the wine-makers on show represented, along with a few words of introduction about each winery, and a set of photos from the enjoyable event. Bottoms up!

Belward Winery is based in the Pécs wine region, where grapes have been cultivated since 1058 and which extends over the southern slopes of the Mecsek mountains that produces primarily white wine with high sugar content to the sub-mediterranean climate. Belward produces four wine families: Classic, including Olaszrizling (Italian riesling) -- which was declared the Wine of the City of Pecs in 2015, Chardonnay Barrique, Eufória Cuvée, Hárslevelű (Lindenleaf) Superior and Rajnai Rizling (Rhine Riesling); Campus, targeting students; Semi-sparkling; and Table.

The Szekszárd wine region in southern Hungary, best known for its spicy and full-bodied reds, was represented by the Dúzsi Winery led by Tamás Dúzsi, a horticulture engineer by training and member of Wine Academy of Hungary and Pannon Winemaker Guild of Hungary, who has been grooming his children to carry on the family business. Dúzsi produces more than 25 types of white, rosé and red wines, including kékfrankos (blue frankish) and blends based thereon, which have won several awards at internationally-recognized competitions.

Harsányi Cellar, which has been under the ownership of the same family since its establishment in 1850 (except during the Rákosi era just after the second world war), offered its wines from the Tokaj-hegyalja wine region, a World Heritage Site famous for its white and desert wines in northeast Hungary. In addition to a pálinka (brandy), Harsányi produces both dry, semi-sweet and sweet wines, primarily based on furmint, hárslevelü (linden leaf) and sárgamuskotály (yellow muscat) grape varieties, which are the most prevalent in that region.

As the name implies, Janus Vineyard and Tasting Room’s philosophy reflects two faces considering and respecting the past but also toward the future, daring to be fresh and new. Janus has a newly planted vineyard in the western border of the Villány wine region in southern Hungary. Primary varieties include portugieser, pinot noir, merlot, cabernet franc, cabernet sauvignon, shiraz, sauvignon blanc and muscat lunel. Wines include a rosé, a group of reds that have won a range of awards from Siklós St George Day Wine Competition, International Pan-European Wine Competition, Wine Community National Council, Tenkes Wine Community, Villányi Wine Competition and the Prestiege Reserve Wine.

Kristinus Wine Estate (formerly AX) is based in Kéthely in the Balatonboglár wine region on the south shore of Lake Balaton. Kristinus produces white semi-sweet sparkling wine using yellow muscat, dry whites such as irsai olivér and reds such as its Sas (Eagle), a cuvee of merlot, cabernet franc and cabernet sauvignon. Complementing its wines, the Kristunus Wine Estate, which represents the largest wine investment in its area, encompasses a striking contemporary headquarters building, gastronomy offerings via its own restaurant and café as well as cultural events such as concerts and films at its own stage and cinema.

SzépvölgyönÁT was established in 2012 by wine enthusiasts Ádám Imre and Tibor Hofmann, who bought a small vineyard and a cellar in the Etyek-Buda wine region. Their mission is to present the terroir of Etyek-Buda by cultivating grapes with low yields and as naturally as possible, using the most authentic methods to create the complexity that reflects traditional Etyek-Buda wine characteristics. SzépvölgyönÁT focuses on white wines, primarily from the sauvignon blanc, pinot gris, grüner veltliner, chardonnay and pinot noir varieties.

Photos by Russell Skidmore for XpatLoop.com
After an extensive career in advertising - as an Art Director & Creative Director in London, Paris and Budapest for leading agencies - Russel transferred the skills and knowledge gained to the development of his own successful company covering wedding, event, PR and portrait photography: www.russell-skidmore-photography.co.uk