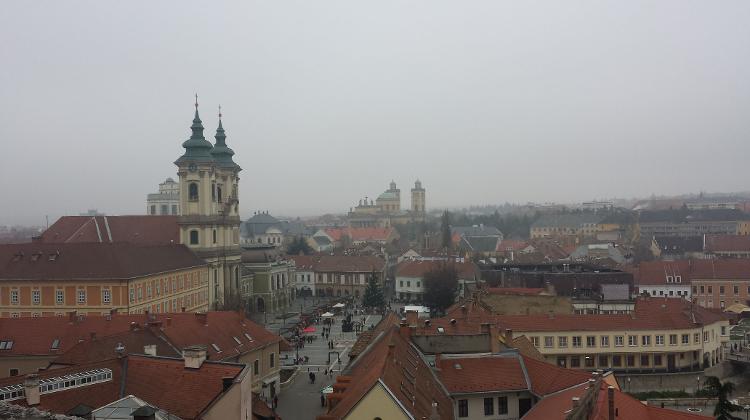 Last weekend we ventured out into the north-east region of Hungary and visited the beautiful city of Eger. The City of Eger is over a thousand years old, with its glorious historical past, valuable historical building complexes, wines and curative waters is one of the most famous cities of Hungary. It was a bishop's seat as early as during the reign of our first king, Szent István.

The town was not spared by the storms of history: it was almost destroyed during the Tartar invasion but its stone fortress built in the 12 th century already played a very important role in the defense of the town during the Turkish battles.

In 1552, the captain of the fort, Dobó István, and his 2,000-strong army, just a handful of soldiers - withstood the attack of the 40-times stronger Turkish army for over a month. Close to 170 outstanding creations of the architecture of past centuries survived in almost untouched beauty.

The town and its surroundings are a famous historical wine region. The residents have been involved in grape and wine production for almost a thousand years, producing such excellent wines as Egri Bikavér, Egri Leányka, Debrői Hárslevelű, Egri Chardonnay, Egri Cabernet Franc and Sauvignon, Egri Merlot, Egri Kékfrankos and Kékmedoc. After the change of regime, the Eger wine region went through an extraordinarily fast development.

Through the re-planting of the traditional and new types in the best production areas, the area of the vine-lands has grown significantly (Nagy-Eged, Pajdos). The AOC system operating in developed, western wine-cultures has been adopted. In addition to the one large state winemaking company, through the establishment and spectacular development of several hundred medium- and small-sized wine-companies, the quality of the wines of the wine region has improved significantly.

Though the age of the oldest wine cellars is over 400 years, new cellars are still being cut even nowadays.

ZuzmÓ Urban BBQ is located right next door to the entrance of the Eger Castle. They follow the traditional southern style or Texas style barbecuing which refers to a technique of cooking that involves cooking meat for long periods of time at low temperatures ( 125C/250F ) with smoke from a wood fire. Often this is called pit barbecue, and the facility for cooking it is the barbecue pit.

This form of cooking adds a distinctive smoky taste to the meat. This technique is not to be mixed up with cold smoking which is a completely different ballgame.

The Zuzmo guys own two different kind of smokers, this one above is a so called offset smoker. It is fueled by burning wood which provides both the desired heat and the smoke that flavours the meat.

The other smoker they use is a charcoal fueled professional cabinet smoker where the heat is being provided by charcoal while the smoky taste is achieved by using smoking wood.

The major difference between the two is that the cabinet smoker is much easier to use and keeps the desired heat longer.

The usual suspects when it comes to barbecuing are chicken legs, pork shoulders, pork or beef ribs, beef briskets and sausages. Beef briskets are being served cut while the pork shoulders are usually done as pulled pork sandwiches.

Barbecue sauces are being home made along with the burgers and cubanos on top of the barbecue range.

They carry a selection of craft beers imported from the Czech Republic, they even had IPA which is my personal favourite and not being a typical Czech beer per say. Winelovers will not be dissapointed neither as they carry wines from local, young, up and coming wineries such as Böjt. If you are not into alcoholic beverages you can still enjoy their organic cofees and teas.

I had a long chat with the owner and they are not only cooking for their restaurant but they also just started a BBQversity where they teach people how to barbecue. This is an excellent opportunity for groups, friends, couples and even companies to spend a fantastic day @ Szarvaskő and have fun cooking.

Zúzmó BBQ is a perfect place to eat when you are visiting the beautiful city of Eger. Even if you are not into smokey food you can still pick many items from their extensive menu.

Are you interested to get daily hints and tips on eating out in Budapest, would you like to know the latest hotspots for quality drinks and food? You know cool places and you are ready to share them with others? Join Budapest Good Food and Drinks Guide facebook group to see what Hungarians and expats, yep Xpats, all like.