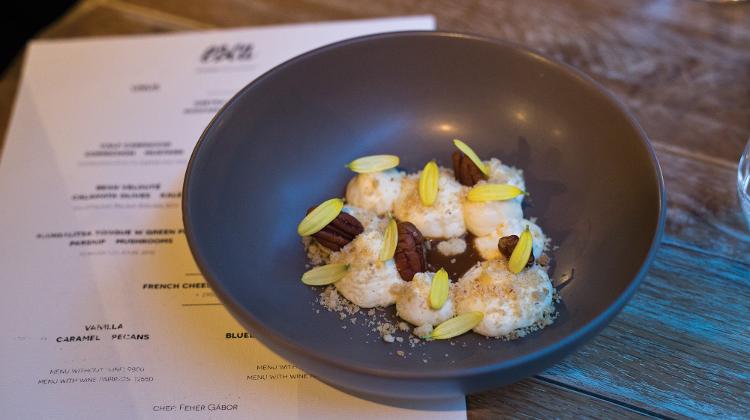 The tiny fine-dining restaurant at the edge of the Jewish Quarter has hardly been open for a year but is already very popular. The reason is not only the excellent food, taking its concept primarily from Nordic cuisine, but also owner and chef Gábor Fehér who was named “Young chef of the year” by Dining Guide in March. Recently attention was raised by the drastic transformation of the studio-restaurant, now in sexy black design instead of the old innocent white one.

Usually the word studio describes a one-room apartment designed to suit the need of singles, with a living room that also includes a kitchenette. This gives you an idea how to imagine the concept of “studio-restaurants”, which is followed by ESCA also.

Sixteen can be seated in the exclusive small restaurant, which includes both a cocktail bar and a show kitchen.
On one hand the tight space provides an inevitable intimacy, which is complemented by the Nordic-inspired interior with tables of natural wood, animal furs and the walls painted completely black. On the other hand the close proximity to the open kitchen allows the guests to be involved in the preparation process of their own dinner.

Looking over the shoulder of Gábor Fehér as the 20-year-old chef performs his precise moves in the kitchen is almost as enjoyable as the final result. The show is just as much part of the concept of a studio restaurant as the limited choice of dishes – you can only choose from two four-course menus, which are already predetermined.

Both of the menus are prepared from high-value ingredients, although the second option of the weekly changing menus is somewhat more luxurious, which is also represented in the price. Both menus can be selected combined with a wine selection always paired up with the current dishes. One glass is served with each course.

Cooking is so yesterday – raw is in

Chef Fehér, whose style is often described as especially innovative, swears by Nordic cuisine. The dishes and recipes of the Scandinavian countries have been becoming very trendy in the past few years all around Europe. Their success is in close connection with the Copenhagen fine-dining restaurant called Noma.

Noma has two Michelin stars and was selected four times as the best restaurant of the year worldwide between 2010 and 2015. Fehér lived and worked in Denmark for a time, and thus had the chance to learn a lot about the “new Nordic cuisine”. So it’s no wonder that there are many fish dishes among his creations.

He also tends to follow the “raw-food” movement since the dishes on the plates of ESCA often remain cold. This preparation method is not only particularly healthy but it also allows the diners to enjoy the taste of many ingredients in a new, uncorrupted way. Further, Fehér tends to use little to none when it comes to spices.

Reservations are advised for dinner in this small fine-dining restaurant. On the five days of the week when ESCA is open for five hours, there is only occasionally a free table. It is surely not a place for families and not really for a cosy dinner with friends. It’s also not the right place for big eaters.

However, it’s an excellent choice for gourmets seeking special tastes and for those who appreciate sophisticated presentation and innovative preparation of dishes. In addition, the hip place is the right choice to impress your significant other with a refined dinner. The sensual atmosphere and artistically presented four-course menus will surely make every date a celebration.