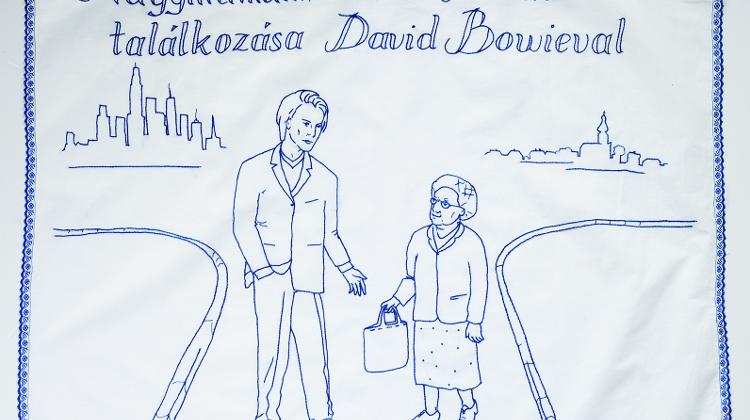 Simultaneously with Ludwig Museum’s recently opened exhibition Passion. Fan Behaviour and Art, Rock/Space/Time takes its audience on a journey through the recent past of the Hungarian visual arts scene. In addition to the analysis of fan behaviour, this exhibition focuses on the relation between popular music and contemporary art.

The works on display represent possible artistic approaches and positions engendered by the mutual influence of the two creative fields. The retrospective show approaches the cultural scene of the past decades in terms of typical artistic strategies instead of an encyclopaedic overview. Different creative attitudes appear in the thematic sections of the exhibition in a structured way.

The interactions between different genres and means of expression, the mutual inspiration, and the underlying opportunities in the combined use of artistic media have always been present in modern art’s practices of expression.

Pop music has traditionally belonged to the zone of popular culture in Hungary as well, and has gained increasing cultural influence owing to its development and role in the everyday life of its consumers. From simple entertainment it has turned into a defining cultural format that is considered a significant barometer of a given period.

As a development of recent decades, pop music and its associated media have given rise to alternative lifestyles, subcultures and contents on the level of cultural practices. Pop music as a global code has sprouted peculiar local variants while the complexity of cultural influences and components has become breeding ground for a number of hybrid phenomena.

The exhibition provides a selection of key works from this complex and multi-faceted cultural phenomenon as well as pieces that represent positions generally considered peculiar or marginal.

The title of the exhibition alludes to a cult documentary made by János Xantus in the 1980s, (Rocktérítő—a pun referring to the Tropic of Cancer, “Ráktérítő” in Hungarian, while literally it means “rock evangelist”), about Tamás Pajor, lead singer of the alternative band Neurotic, who gives up his underground lifestyle, converts—“the Holy Spirit is absorbed instead of drugs”—and continues making music in a new environment. It is a typical phenomenon that former figures of the music subculture change lifestyle, and over the years, their old life and music is integrated into the cultural canon.

Iconic works, characteristic positions, important sites, and influential scenes generated on the borderline between Hungarian pop music and contemporary art are represented at the exhibition as independent propositions and reflections. From a historical aspect, the underground music of the 1970s and 1980s is inseparable from the visual arts of the period.

The exhibition focuses on the gateways between these two parallel worlds, on the life structures that were generated as a result of these interactions, but are obsolete today. Many artists have expressed themselves as musicians in recent decades, and the neo-avant-garde approach to art has considered it natural that artists create works in different media, crossing genres.

The development of pop music and pop culture in general has given life to new genres and techniques (covers, posters, music videos, etc.), which have opened up new media for visual arts. While before, musical orientation was part of the individual’s personal fields of interest and sphere of taste, in contemporary works, the lifeworld of pop music appears regularly as themes and motifs.

Music has special importance in everyday life, especially taking the centre of young people’s interest, playing an important role in their identity formation. Pop music is situated in our constantly changing social environment, in the point of intersection between visuality and time-based arts.
“Rock ‘n’ roll is not just a dance!” (Neurotic)