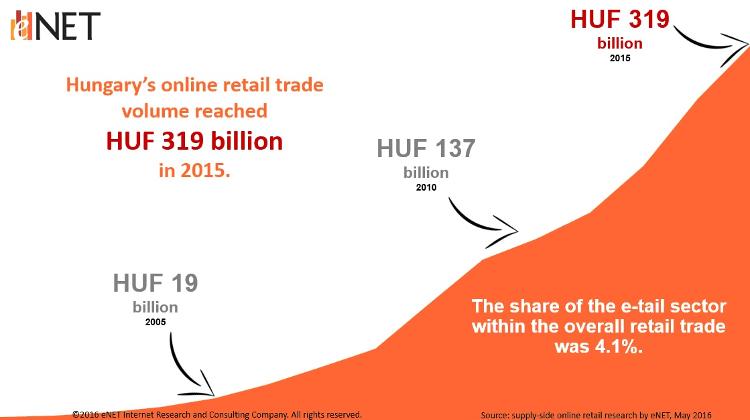 For the past few years the online retail trade sector has been on a dynamic rise, the research group said. The group noted that one in every 25 forints was spent online over the last year.

The e-commerce sector, which is often referred to as “e-tail sector” saw the continuation of trends of the previous years. The volume of net trade was up 17% last year, as compared to the previous year, while the share of the e-tail sector within overall retail trade rose by 0.4 of a percentage point last year. In addition, the average cart size increased to a record HUF 11,400 in 2015 as compared to HUF 10,000 in 2014, eNet said.

Despite shopping online, Hungarians still seem to prefer paying for goods in cash. Purchasing the ordered items in cash upon arrival is still the most preferred option by Hungarians when ordering from web stores, eNet said, despite the fact that many online shops provide the option to pay by bank card, bank transfers or other online payment systems.

Shipping by courier (42%) is still the most preferred option by Hungarians in collecting the goods ordered, followed by personally collecting them in a physical store.

Out of the participants in eNetʼs research, approximately 84% of regular internet users purchased goods from domestic webshops, while 35% said they also used foreign online stores. The number of online shoppers increased by 4% in 2015, while the number of customers using foreign webshops rose by 14%, the research adds.

Hungarian e-traders still expect more online customers and transactions in the next three years, as well as an increased share of purchases initiated with mobile devices. Even though the growth of online retail trade has slowed somewhat compared to 2014, this is mostly attributable to an increase in the base figures, eNet says.

The survey was conducted by eNET in May 2016 by interviewing Hungarian web stores. Services sold online were not included.